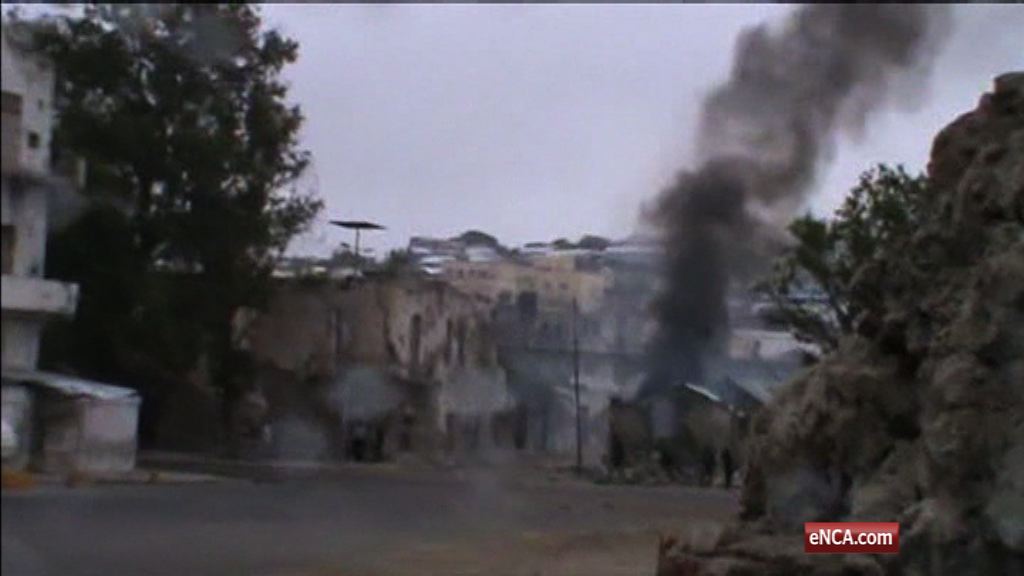 The aftermath of an attack on intelligence headquarters in Somalia in which 12 people were killed.

Somalia&39;s al-Shabaab rebels carried out a car bomb and gun attack against an intelligence headquarters in central Mogadishu on Sunday, leaving at least seven militants and five others dead.

The Al-Qaeda-linked militia claimed responsibility for the raid against the complex, which also houses a major detention facility, saying it was being used for the &39;torture and humiliation&39; of ‘innocent Muslims’.

The coordinated attack came a day after Somalia&39;s national army and African Union forces said they had captured an al-Shabaab stronghold as part of a joint offensive aimed at seizing key ports and cutting off an important source of revenue for the Islamist rebels.

In Sunday&39;s attack, police and witnesses said a car bomb was detonated outside the National Intelligence Centre and was followed by a raid by gunmen disguised in national army uniforms -- a method of attack already used several times this year by al-Shabaab.

‘There were seven attackers. One of them blew himself up in the car while the six others were killed by the security forces," interior ministry spokesman Mohamed Yusuf told reporters.

‘The attack is over now and the attackers have failed to achieve their goal aimed at interrupting the Indian Ocean operation,’ he said, referring to the current AU and government offensive.

Information Minister Mustafa Duhulow said three members of the security forces and two civilians were also killed, but that the attack was halted within 45 minutes.

‘Our courageous mujahedeen in Mogadishu succeeded in attacking the notorious Jila&39;ow prison, controlled by the apostate intelligence services. For a long time innocent Muslims suffered in the dungeons of that prison while being subjected to torture and humiliation,’ he said in a statement.

The Jilicow intelligence facility and detention facility is located close the Villa Somalia, the complex that houses the office of Somalia&39;s internationally-backed President Hassan Sheikh Mohamud.

The Villa Somalia was hit by a similar attack in July, when a car bomb was detonated and al-Shabaab fighters stormed the complex before blowing themselves up. The presidential palace was also attacked in a similar fashion in February, while the parliament complex was hit by a coordinated car bomb and gun attack in May.