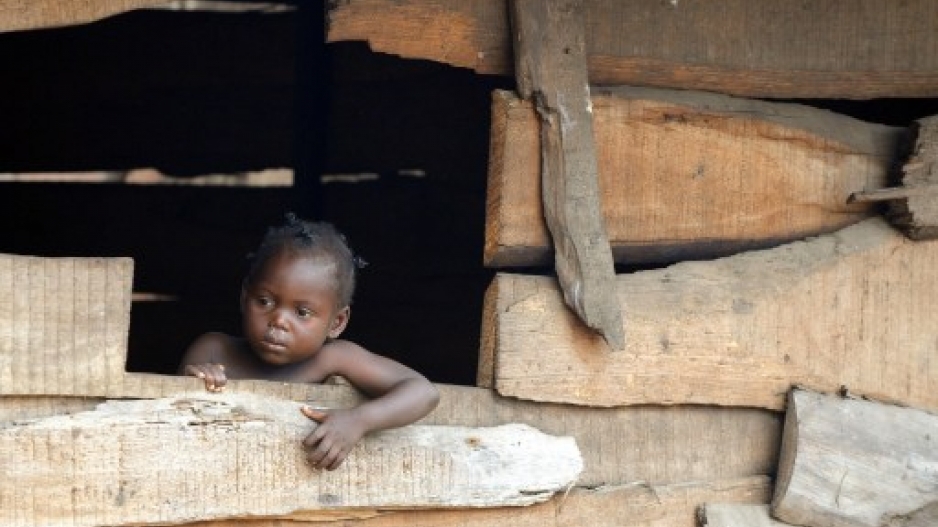 During weeks of inter-religious violence, Pierrette took in children of all ages in Bangui, seeking to provide a safe haven for young victims of conflict in a house lost on a dusty street among tin shacks.

"There is nobody to count on... Parents, save us," a choir of some 30 children sung for visitors to their makeshift abode.

Each of the youngsters came from an urban battleground in which Christian vigilantes took up arms to fight rogue Muslim rebels.

Violence in the highly unstable country has not let up despite the resignation last week of strongman Michel Djotodia under intense regional pressure.

Mercia looked a little lost in the chorus and probably remembered nothing of being held and hugged by Laure, who wants to adopt her and is waiting 5,000 kilometres (3,100 miles) distant in France.

"I was able to see her during a single stay in Bangui last October," Laure, 37, told AFP by telephone, already speaking of Mercia as "my daughter" in spite of the many obstacles to surmount.

The would-be single mother knows that in a strife-prone and very poor country like the CAR, "the procedure will be long. Perhaps we can hope that she will be here in 2014, but the main thing is that she arrives someday."

Born of an unknown father and a prostitute who has disappeared, little Mercia was saved from militias who committed atrocities against civilians and sometimes deliberately targeted children, according to the United Nations and aid workers.

Every child in Pierrette&39;s orphanage remains prey to a food crisis that developed in Bangui once the violence erupted in the mainly Christian country after the Muslim Djotodia was brought to power in a coup last March.

Many of her charges also have tragic backgrounds, Pierrette told AFP.

"Little Omega, for example. Her father had his throat cut and her mother went mad," she said, gently stroking the head of another small girl. And a little boy of three years old had only weighed eight kilos (less than 18 pounds) when she took him in.

Behind the house, a small building with humidity dripping down the walls housed several beds for the bigger children. Above one of them hung an empty drip feed. "One of the children was sick yesterday, I did what I could with what I had, fortunately he&39;s a little better today," Pierrette said.

In the small courtyard of a tumbledown house, Pierrette does her best to help, but everything is difficult and she has no income and no medicine, without counting the chaos of "the outside world".

During the clashes, stray bullets were fired on to her premises, but there were no casualties. "When it&39;s like that, when there&39;s shooting, there&39;s nothing we can do but pray with the children," Pierrette said, still smiling.

Meanwhile in France, Laure spent her time on the phone and the Internet, gathering contacts among aid workers and journalists in Bangui in the hope of hearing news of her promised daughter.

Laure is trying to obtain a visa and to make progress with the complex procedure she has started. But she is a long way from her goal in a country waiting for fresh leadership and where it is extremely hard to carry out the required administrative inquiries for adoptions.

"The mixture between adoption and humanitarian aid is never a solution to consider, especially as regards the essential checks (concerning) the actual adoptable children," warns the Movement for Adoption Without Borders (MASF), in a recent statement.

"It is unfortunately common in situations of conflict or humanitarian emergency to see attempts to adopt engaged in defiance of the most elementary rules of international law of the child," added the MASF, which has member associations on several continents.

Laure has nevertheless clung to her confidence. "I hope to go back in March. I am terribly worried because I know that the lives of these children hang by a thread," she said.