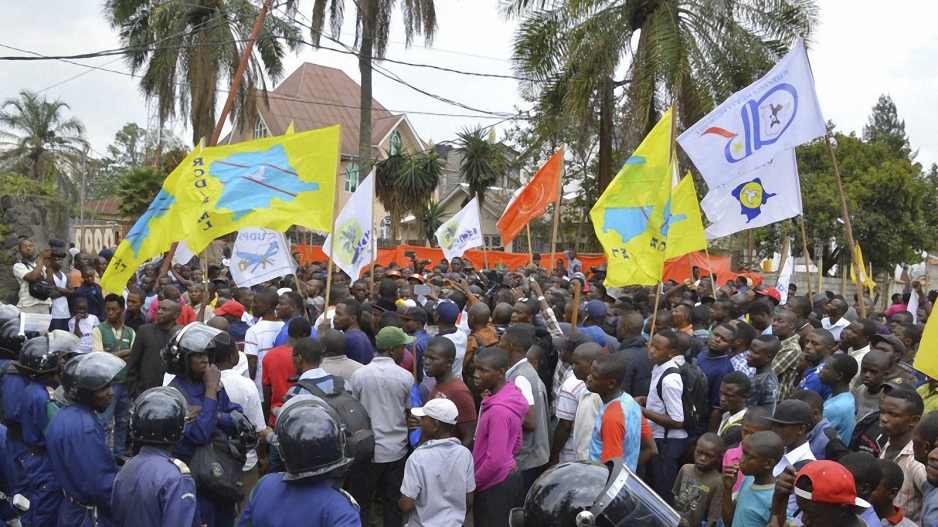 KINSHASA – At least 50 people, mostly civilians, were killed on Monday when clashes erupted ahead of a planned opposition rally in the Congolese capital Kinshasa, a minister said, warning the toll could rise.

It was the worst violence in Kinshasa since January 2015 when a police crackdown on another opposition protest left several dozen people dead.

The clashes began during the morning several hours before the rally, which authorities later cancelled, was to have taken place.

Demonstrators were to demand the resignation of President Joseph Kabila, who has ruled the Democratic Republic of Congo since 2001. Opponents fear he is planning to extend his rule unconstitutionally.

"By midday (1100 GMT), the sad and painful provisional toll from these barbaric and savage acts... (stood at) 17 dead, among them three police officers, one of whom was burnt alive, and 14 civilians who were involved in looting," he said.

The main opposition parties had called for a nationwide demonstration to "give notice" to Kabila, whose mandate expires on December 20.

Although Kabila is banned by the constitution from running again, he has not made any move to schedule elections, fuelling fears he will seek to extend his stay in office.

In May, the Constitutional Court said Kabila could remain in office in a caretaker capacity until an election is held, triggering a wave of angry protests.

France on Monday described the unrest as "very dangerous and extremely worrying" and urged Kabila to lay out a clear timetable for a vote.

"What matters is the date of elections," French Foreign Minister Jean-Marc Ayrault told reporters in New York on the side lines of the UN General Assembly.

"If they&39;re delayed endlessly, that means that Kabila intends to stay in power," he said.

"That&39;s a situation that is not acceptable."

So far, there has been no move to schedule elections and at this stage, it appears practically impossible to organise a poll before the end of the year.

A fringe opposition group has been meeting with the government in a bid to organise a schedule for elections, but veteran opposition leader Etienne Tshisekedi has refused to participate in the talks which are due to end on Saturday.

Monday&39;s rally had been due to start in Kinshasa in the early afternoon, but during the morning, scuffles broke out between stone-throwing youths and anti-riot police.

Police fired tear gas to disperse hundreds of stone-throwers as they tried to march on parliament ahead of the demonstration, which was promptly cancelled by the authorities.

"Kinshasa just experienced an uprising which ended in failure," Boshab said, accusing demonstrators of "deliberately" ignoring a schedule which had been agreed with the authorities.

Government spokesman Lambert Mende had earlier told AFP that two policemen were killed in violence against the ruling party&39;s offices in the volatile Limete district.

A Catholic nun said one of the policemen had been "burnt alive".

Government officials also accused the opposition of "targeted looting", while private security officials said there had been several looting incidents involving banks and Chinese-run shops in the south of the city, which is home to some 10 million people.

Earlier, youths were seen hurling stones at police on the city&39;s main avenue as plumes of smoke rose into the air from burning tyres and from a car and a minibus that had been set alight.

"Kabila, get out!" they shouted as they waved the blue-and-white flags of the opposition Union for Democracy and Social Progress (UDPS), which is headed by Tshisekedi, 83.

Party spokesman Bruno Tshibala told AFP he had seen four bodies in the office of an allied party.

Activists were also seen burning a giant poster of Kabila in which he appealed for the two sides to resolve the crisis through "dialogue". And a diplomatic source reported clashes in several places along the road to the capital&39;s airport.

An AFP photographer and a journalist working for French radio station RFI were briefly detained by the security forces while they covered the clashes.

They were beaten several times and eventually released. However, the AFP photographer&39;s confiscated memory cards were not returned.