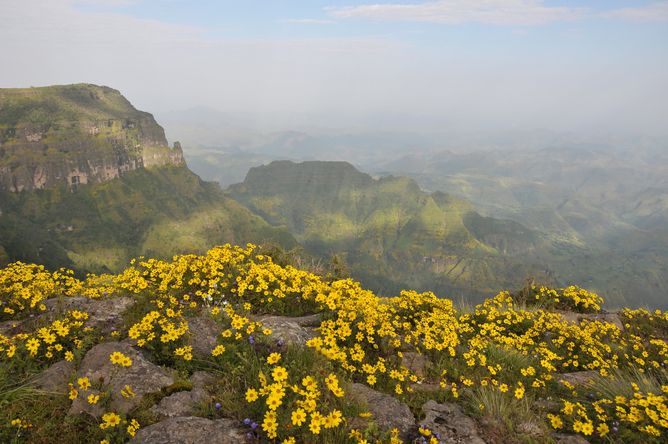 The Simien National Park in Ethiopia is home to globally threatened species.

JOHANNESBURG – More investment is needed in long-term projects to protect people in developing countries from droughts, the heads of the United Nations food agencies said on Tuesday after a visit to Ethiopia, where 9.5 million people are hungry.

The death of many livestock in Ethiopia, as well as in Somalia where 3.3 million people are in need of food after three years with too little rain, has caused a breakdown in pastoral livelihoods, contributing to soaring hunger levels and alarming increases in malnutrition rates, according to the UN Food and Agricultural Organisation (FAO).

“A drought does not need to become an emergency,” said Gilbert Houngbo, President of the International Fund for Agricultural Development (IFAD), travelling as part of a four-day visit that also included FAO Director-General Jos Graziano da Silva and David Beasley, Executive Director of the UN World Food Programme (WFP).

“This is what we need to build on.”

According to a press release, these measures are boosting productivity, increasing incomes and improving nutrition so that rural people can better withstand external shocks like droughts.

“We have seen clearly here that working together the three UN food agencies can achieve much more than alone,” said Beasley.

The three agency heads met with high-level officials in Ethiopia and Somalia to discuss aid efforts, as well as with local residents.

“This drought has been going on for a long time and we have lost much of our livestock,” Hajiji Abdi, a community elder told them.

“If we didn’t get food assistance, we would be in big trouble – but this is still not enough to feed us all.”