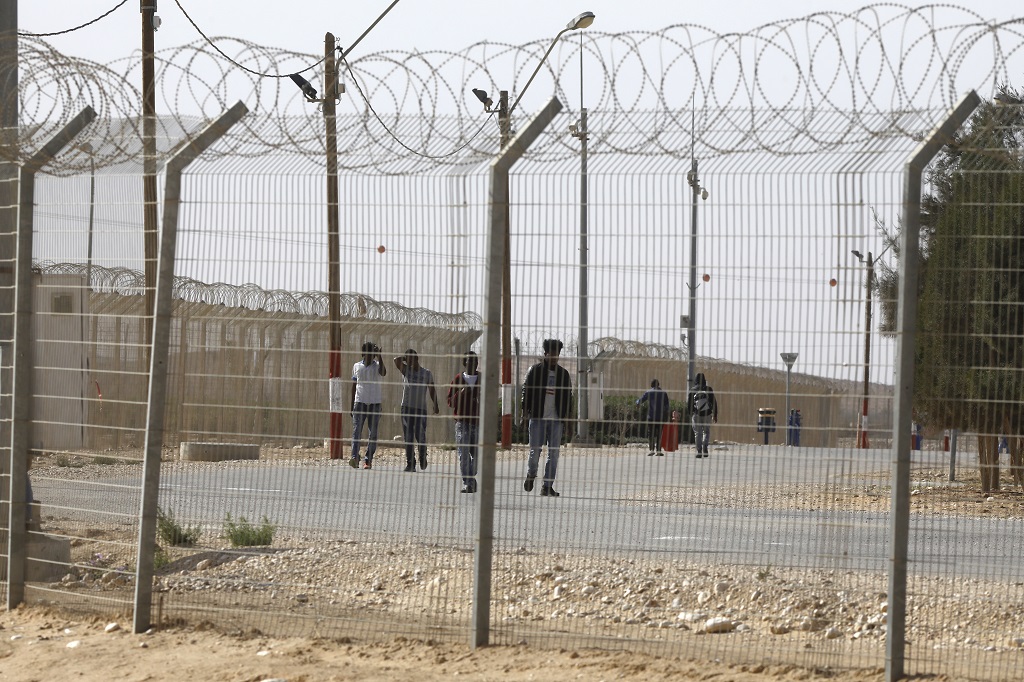 Detained African migrants walking inside the Holot detention centre, located in Israel's southern Negev desert on February 4, 2018. Israel is working toward expelling some migrants who entered the Jewish state illegally.

Holot Detention Centre, Israel - At a detention centre in Israel&39;s Negev desert, African migrants facing deportation say they would rather be imprisoned than sent to a country they know nothing about.

"I won&39;t go there," Abda Ishmael, a 28-year-old Eritrean, said in excellent Hebrew outside Holot, an open facility housing some 1,200 migrants and set to be shut down on April 1 as part of the government&39;s expulsion policy.

"Guys who were here and went to Rwanda and Uganda - we saw what happened to them."

Israel is working to expel thousands of Eritreans and Sudanese who entered illegally over the years, giving them an ultimatum: leave by April 1 or risk being imprisoned indefinitely.

As the migrants could face danger or imprisonment if returned to their homelands, Israel is offering to relocate them to an unnamed third country, which aid workers say is Rwanda or Uganda.

The plan has drawn criticism from the United Nations&39; refugee agency as well as some in Israel, including Holocaust survivors who say the country has a special duty to protect migrants.

Eritreans at Holot say Rwanda and Uganda hold no prospects for them, and they would rather be imprisoned in Israel than embark on another journey into the unknown.

Ishmael, who reached Israel in 2011 after a terrifying journey from Eritrea, has heard about the fates of others sent to Rwanda or Uganda.

He said they have faced hardships in their new homes and gone on to take dangerous routes to Europe in hope of winning refugee status.

He vowed he would not voluntarily step back into the unknown.

"These people were just seeking asylum."

To Shishay Tewelde Medihin, 24, Rwanda and Uganda are "death countries" and Israel is "risking my life".

He slammed an aid package Israel is reportedly planning to offer African countries in return for absorbing the migrants.

Tewelde Medihin said he planned to stay "indefinitely" in Saharonim prison, where migrants are expected to be sent if they refuse to leave.

According to interior ministry figures, there are currently some 42,000 African migrants in Israel, half of them children, women or men with families, who are not facing the April deportation deadline.

Israeli officials stress that no one they classify as a refugee or asylum seeker will be deported.

But out of some 15,400 asylum requests filed, 6,600 have been processed and just 11 have received positive answers.

Another 1,000 Sudanese from Darfur have received special status preventing their deportation.

Other men whose requests have been denied could face deportation.

Migrants began entering Israel through what was then a porous Egyptian border in 2007. The border has since been strengthened, all but ending illegal crossings.

Many migrants ended up in southern Tel Aviv, where they found work as dishwashers and cooks. But their growing community angered some Israelis.

Religious and conservative politicians have portrayed the presence of Muslim and Christian Africans as a threat to Israel&39;s Jewish character.

Calling them "infiltrators," Prime Minister Benjamin Netanyahu has repeatedly called for their expulsion.

Rights groups have rallied to the migrants&39; cause, saying they should be recognised in Israel as refugees and arguing they will face grave dangers if they are deported.

Others argue that conditions in Rwanda and Uganda are acceptable and it is not Israel&39;s duty to care for them.

"I&39;ll ensure all the rights we promised them, and at the same time, I&39;ll rehabilitate south Tel Aviv," Interior Minister Arye Deri said.

The migrants located at Holot are allowed to leave during the day.

Waiting for a bus outside the facility, a defiant Ahmad Jamal, 25, said the government&39;s plan was a ploy by Netanyahu to divert attention from corruption probes.

Ishmael asked how he could be considered an economic migrant if he cannot be deported to his country of origin because of the dangers there.

"If the government really thinks I infiltrated to become a work migrant, it should have returned me to my country of origin," he said.

Both Ishmael and Tewelde Medihin miss their home country, but say they had no choice but to flee what they describe as a dictatorship.

"If things were better there, I wouldn&39;t stay another minute here. I miss my country, my mother, my people," Tewelde Medihin said. "I didn&39;t want to be a refugee."

Like the other Eritreans at the centre, Jamal&39;s route to Israel involved an arduous trek through African countries and the Sinai desert, where he and his peers were at the mercy of Bedouin smugglers.

He also said he would refuse a cash payoff and hope for the best.

"God will watch over me, nobody else does," he said. "We&39;re not afraid of anything. We&39;ve been through much worse."