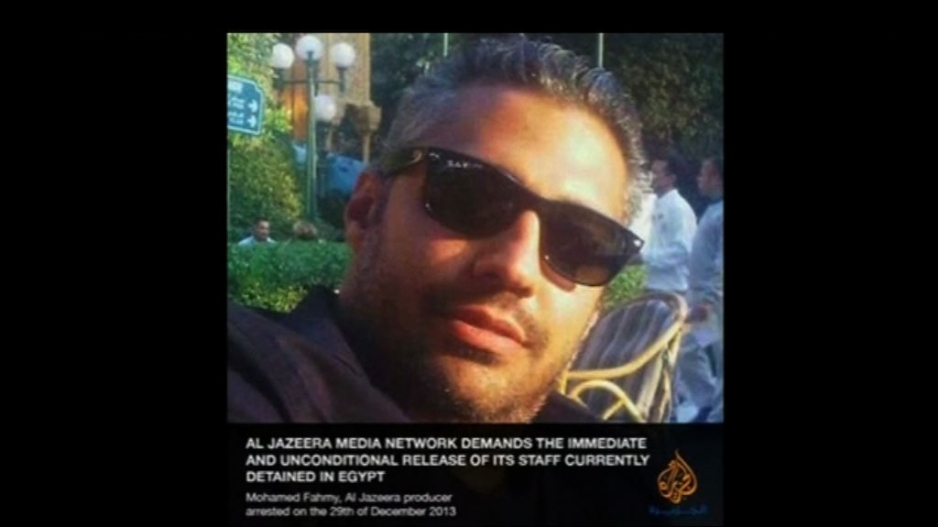 An Egyptian-Canadian journalist has given up his Egyptian citizenship to get out of prison in Egypt after his Australian colleague was set free on Sunday.

CAIRO - Al Jazeera journalist Mohamed Fahmy has renounced his Egyptian citizenship, his family said Tuesday, in a bid to follow his Australian colleague Peter Greste in being released from a Cairo jail.

Fahmy&39;s surrender of his Egyptian passport is a necessary first step for him to be released and deported as a foreign national under a decree issued by President Abdel Fattah al-Sisi in November. He also has Canadian citizenship.

The news came after Canadian Foreign Minister John Baird said that Fahmy&39;s release was "imminent" following the freeing of Greste on Sunday.

The two men were arrested in December 2013 along with Egyptian producer Baher Mohamed, and later sentenced to up to 10 years in prison on charges of aiding the blacklisted Muslim Brotherhood.

Their jailing sparked a global outcry and proved a public relations nightmare for Sisi, who has cracked down on Islamists since toppling president Mohamed Morsi in July 2013.

"He signed the papers more than a week ago" giving up his Egyptian citizenship, a relative of Fahmy told AFP on condition of anonymity.

"It was very hard for him because he is a proud Egyptian who comes from a family of military servicemen."

An Egyptian official following the case told AFP: "The final legal procedures for his deportation are being completed."

He said Fahmy&39;s renunciation of citizenship had already been finalised.

"How could Fahmy give up his nationality in exchange for freedom?"ask ppl,who have never been in jail,from the luxury of their homes.Ummm...

Soon after Greste&39;s release, Fahmy&39;s fiancee, Marwa Omara, told AFP: "We are expecting Mohamed to be released in the coming days."

Egyptian police arrested the three journalists at the peak of a diplomatic row between Cairo and Qatar, which owns Al-Jazeera.

The broadcaster had been critical of the deadly crackdown on Morsi&39;s Muslim Brotherhood following the Islamist leader&39;s overthrow.

Qatar has since moved to mend ties with Egypt, and Al Jazeera has closed its Arabic-language Egyptian affiliate which backed the Brotherhood.

Last month, the three men&39;s convictions were overturned by an appeal court which ordered a retrial but kept them in custody.

After his release, Greste, who is currently resting in Cyprus before heading home to Australia, expressed hope that his two colleagues would be released soon.

"This is a massive step forward... I just hope that Egypt keeps going down this path with the others," he said in an Al Jazeera interview.

Greste said he felt a "real mix of emotions boiling inside" upon hearing the unexpected news that he was to be released because it meant leaving behind "my brothers" Fahmy and Mohamed.

"I feel incredible angst about my colleagues, leaving them behind," he said.

"Amidst all this relief, I still feel a sense of concern. If it&39;s appropriate for me to be free, it&39;s right for all of them to be freed."

Al Jazeera has vowed to pursue the campaign to free both Fahmy and producer Mohamed.

But the channel&39;s head of newsgathering, Heather Allan, admitted she was not confident that Mohamed would be released as he has no second passport.

Mohamed&39;s family has pinned their hopes on a presidential pardon or his acquittal on appeal.

Amnesty International said Greste&39;s release should not divert attention from the continuing imprisonment of Fahmy and Mohamed.

"All three men are facing trumped up charges and were forced to endure a farcical trial marred by irregularities," the rights group said.