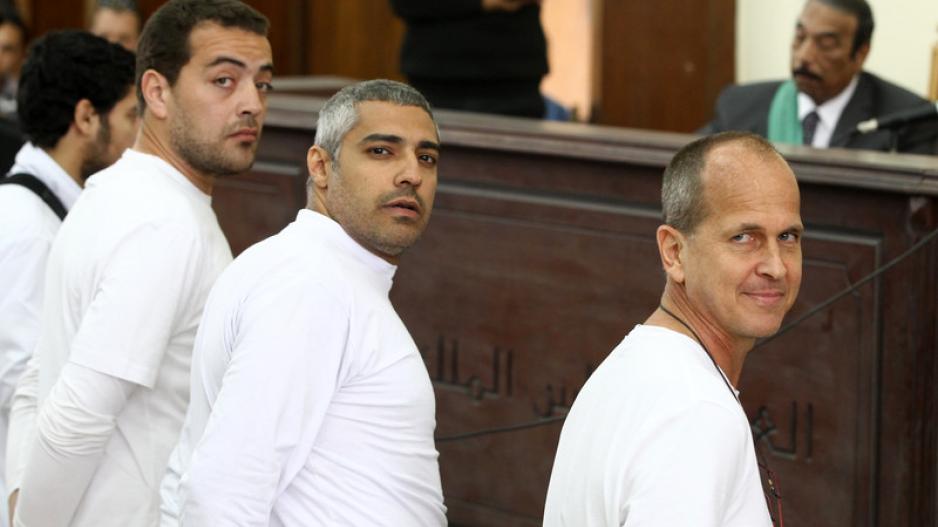 Australian journalist Peter Greste (R) and other co-defendants stand in front of the judge's bench during their trial for allegedly supporting a terrorist group and spreading false information, in Cairo, Egypt.

CAIRO – The three Al-Jazeera English journalists on trial in Egyt have been sentenced to three years in prison, bringing an end to their long-running trial criticised worldwide by press freedom advocates and human rights activists.

Previous hearings for a verdict by Judge Hassan Farid have been delayed. But on Saturday, Egypt’s state news agency MENA said a verdict was expected in the case.

Fahmy, who was Al-Jazeera’s acting Cairo bureau chief, said on Friday that he was particularly hopeful because senior Egyptian officials had agreed to meet his lawyer Amal Clooney, who had arrived to represent him in Cairo for the first time in Saturday’s proceedings.

“I’m cautiously optimistic. The fact that the government has been responsive to Amal’s requests is a very positive sign,” he said.

Their case began in December 2013, when Egyptian security forces raided the upscale hotel suite used by Al-Jazeera at the time to report from Egypt.

Authorities arrested Fahmy, Greste and Mohammed, later charging them with allegedly being part of Mursi’s Muslim Brotherhood, which authorities have declared a terrorist organisation, and airing falsified footage intended to damage national security.

Since Mursi’s ousting, Egypt has cracked down heavily on his supporters, and the journalists were accused of being mouthpieces for the Brotherhood.

Al-Jazeera and the journalists have denied the allegations, saying they were simply reporting the news.

However, Doha has been a strong supporter of the Brotherhood and other Islamist groups in the greater Middle East.

At trial, prosecutors used news clips about an animal hospital with donkeys and horses, and another about Christian life in Egypt, as evidence they broke the law.

Defence lawyers – and even the judge – dismissed the videos as irrelevant. Nonetheless, the three men were convicted on June 23 last year with Greste and Fahmy sentenced to seven years in prison and Mohammed to 10 years.

The verdict brought a landslide of international condemnation and calls for newly elected President Abdel Fattah el-Sisi, who as military chief led the overthrow of Mursi, to intervene.

Egypt’s Court of Cassation, the country’s highest appeals court, later ordered their retrial, saying the initial proceedings were marred by violations of the defendants’ rights.

Egypt deported Greste in February, though he remained charged in the case. Fahmy and Mohammed were later released on bail.

Fahmy was asked to give up his Egyptian nationality by Egyptian officials in order to qualify for deportation. It’s not clear why he wasn’t deported, though Fahmy said he thinks Canada could have pressed Cairo harder on the matter.

Angered by Al-Jazeera handling of the case, Fahmy has filed a lawsuit in Canada seeking Can$100-million (R1-billion) from the broadcaster, saying that it put the story ahead of employee safety and used its Arabic-language channels to advocate for the Brotherhood.

Al-Jazeera has said Fahmy should seek compensation from Egypt.

Speaking on Friday, Mohammed said he had done nothing wrong in his job as a journalist, and deserved to have the charges dismissed. He said he was putting the case out of his mind as he celebrated the birthday of his son, born while he was in prison.

“I wasn’t there last year, so this year is great. Thank God I’m with my family,” he said.