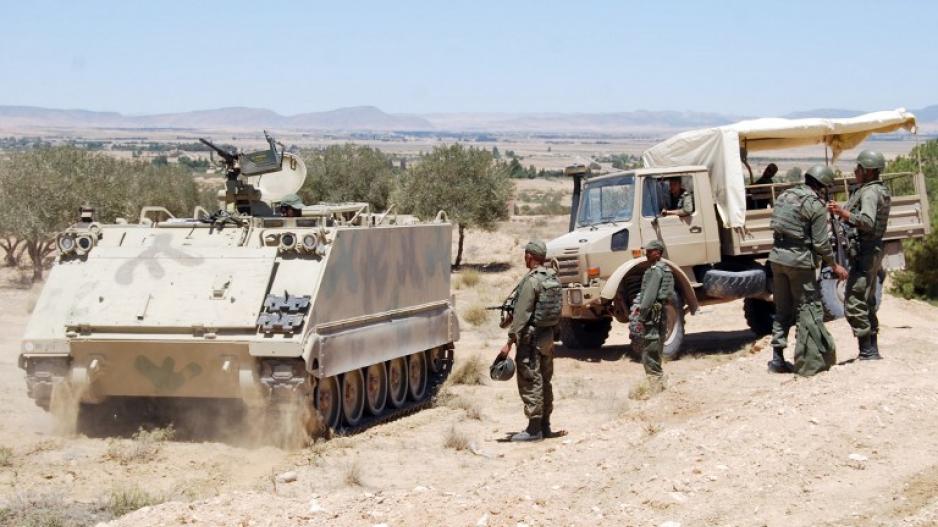 Tunisian soldiers search for landmines on June 11, 2013 in the Mount Chaambi region where the Tunisian army has been tracking militants the government says are veterans of the Islamist rebellion in northern Mali with links to Al-Qaeda.

BAMAKO - A powerful Al-Qaeda-linked group on Friday claimed an attack on a United Nations camp that killed three Guinean peacekeepers in Kidal in Mali's troubled north.

The Group to Support Islam and Muslims, a fusion of three Malian jihadist groups with previous Al-Qaeda links, posted a statement on its Telegram channel saying it had targeted the UN base "with a set of mortar shells", wounding soldiers and causing significant material damage, the SITE extremism monitor reported.

The UN mission in Mali, MINUSMA, said earlier on Friday its Kidal camp "came under heavy rocket/mortar fire" and "a little later a position nearby was attacked" outside their base, killing three peacekeepers and wounding eight more.

The Group to Support Islam and Muslims, also known as Jamaat Nusrat al-Islam wal-Muslimeen in Arabic, is a fusion of three Malian jihadist groups with previous Al-Qaeda links formed in March.

Led by the Malian jihadist Iyad Ag Ghaly, a former leader of the Ansar Dine Islamists, the group has claimed multiple attacks on domestic and foreign forces since its formation.

The UN mission said it "condemned in the strongest terms these cowardly attacks against its personnel and the danger they cause for the civilian population."

The Guinean government said "terrorist attacks" had killed "three valiant soldiers (and) wounded three others" at a checkpoint just outside the camp, adding that one of its contingents remained unaccounted for.

The attack is just the latest to target the 12,000-strong UN force in the West African nation.

Guinean and Chadian soldiers make up the majority of troops stationed at the Kidal camp, where seven Guineans were killed in February 2016 by suicide bombers.

MINUSMA began work in 2013, providing security and assisting Malian troops struggling to keep the country safe. It has been targeted constantly by jihadists, with dozens of peacekeepers killed.

Northern Mali fell to jihadist groups linked to Al-Qaeda in March 2012, including Ansar Dine, and although these forces were driven out of key towns by a French-led military intervention the following year, the Islamists have now spread further south.

Since 2015, jihadists have targeted Mali's centre and their activities have spilt over into neighbouring countries including Niger and Burkina Faso.

The Group to Support Islam and Muslims killed two peacekeepers on 23 May near Aguelhok, close to the border with Algeria, while a Liberian peacekeeper was killed earlier in May close to Timbuktu.

France on Tuesday asked the UN Security Council to authorise the deployment of a five-nation African military force to buttress the fight against jihadists in the Sahel region, with its base in Mali.

The force would be under a separate command from MINUSMA and France's own counter-terror operation in the Sahel region but will be backed by the UN and the European Union.