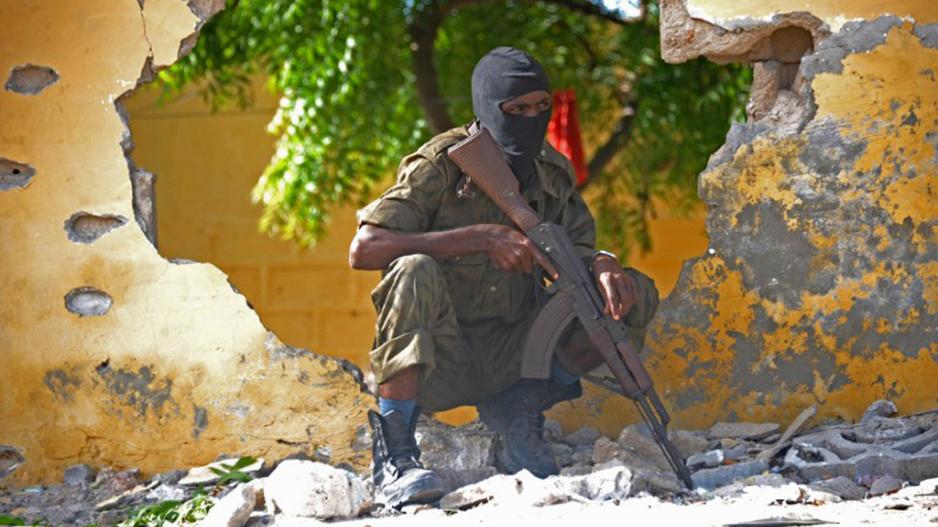 A Somali soldier stands guard next to the site where al-Shabaab militants carried out a suicide attack against a military intelligence base in Mogadishu on June 21, 2015.

MOGADISHU - The leader of Somalia&39;s Al-Qaeda-affiliated al-Shabaab rebels on Friday issued an Eid message calling for a wave of new recruits in order to "lift the pain of Muslims" across East Africa.

"The sword of the Mujahedeen is drawn and attacks against the enemy are ongoing countrywide and we are calling them to increase their attacks on the infidels," he said in a statement posted on an Islamist website.

"We say to our beloved brothers living in territories under Kenyan colonisation that your brothers will never stop coming to your assistance," he said.

"You have to know that Jihad is the only way you can free yourselves from the oppression and humiliation you are now facing, so rush and join in the Jihad... and liberate your territories from the Christians."

Diriye praised the April massacre at Garissa university in northeastern Kenya, in which four al-Shabaab gunmen killed 148 people, most of them students. The attackers were mostly Muslims from Kenya.

"We congratulate you and the rest of the Muslims in the world on the heroic Garissa university operation," the group’s leader said, saying the massacre was retaliation for "organised extrajudicial killings against clerics and kidnappings of Islamic youth" along Kenya&39;s Muslim-majority

"The time for the Christians to engage in atrocities without accountability is over," he said. "We pray to God to lift the pain of the Muslims in the whole of eastern Africa -- Ethiopia, Uganda and Djibouti."

"We will not spare any effort to assist you, and the doors of our training camps are open to receive you and our houses are open to welcome you."

Al-Shabaab, meaning "youth" in Arabic, emerged out of a bitter insurgency against Ethiopia, whose troops entered Somalia in a 2006 US-backed invasion to topple the Islamic Courts Union that was then controlling the capital Mogadishu.

Al-Shabaab rebels continue to stage frequent attacks, seeking to counter claims that they are close to defeat after losing territory in the face of an African Union and Somali government offensive, regular US drone strikes against their leaders and defections.

Currently affiliated to the Al-Qaeda franchise, there has been mounting speculation that the group could shift its allegiance to the Islamic State group.

Al-Shabaab were once a magnet for foreign volunteers, but their capacity to recruit has in recent years been eclipsed by the rise of Islamic State militants in Syria and Iraq, while several foreign Shebab members have fallen victim to in-fighting and purges.