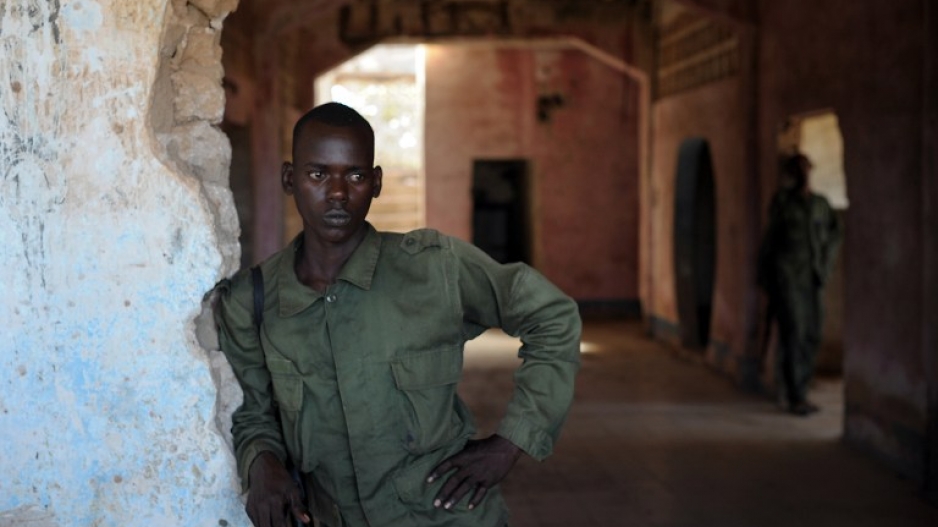 A Somali National Army soldier standing against a crumbling wall at the army's headquarters in Kismayo on September 21, 2013.

MOGADISHU - At least 14 Somali soldiers were killed and more than 20 others wounded Saturday in suicide attack by al-Shabaab rebels in southern Somalia, officials and witnesses said.

The attack occurred inside a former university building on the outskirts of Kismayo, where African Union peacekeepers from Kenya and Somali soldiers are stationed, officials said.

"A minibus loaded with explosives was detonated inside the training part of the military camp. Fourteen soldiers were confirmed dead and more than 20 wounded," Mohamed Abisalad, a Somali military official in Kismayo, told AFP.

"The incident is still being investigated to establish how the suicide bomber managed to pass by several checkpoints outside the camp," he added.

The Al-Qaeda-affiliated al-Shabaab said it carried out the attack, and claimed the death toll was significantly higher than reported.

"One hundred apostate militia were killed in an operation carried out by one of the brave Mujahedeen suicide attackers who drove his vehicle through the enemy inside a training camp and detonated. May Allah accept him," the group said in a statement.

The group is fighting to overthrow the internationally-backed government in Mogadishu.