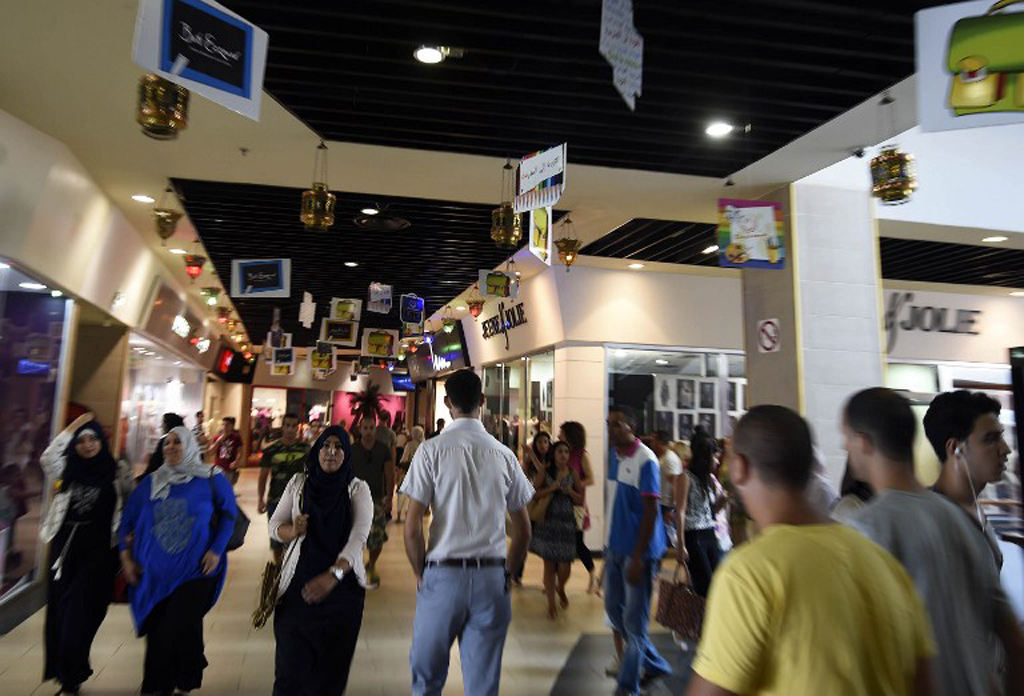 Algerians stroll through the Bab Ezzouar commercial centre in the capital Algiers on August 29, 2015.

ALGIERS - Young people don&39;t have many places to socialise in conservative Algeria. But now the North African&39;s country&39;s youth are discovering something their counterparts in the West embraced a generation ago: the shopping centre.

And away from family pressures, against this new backdrop of massive carparks, shiny floors, benches and fountains, they are letting their hair down.

The enormous Bab Ezzouar mall, opened in 2010 in a new business district near the Algiers airport, was Algeria&39;s first major shopping centre.

For the last five years, its cinemas, bowling alley and coffee shops have provided a venue for those seeking to escape the prying eyes of relatives and neighbours.

An Algerian woman enters a beauty salon at the Bab Ezzouar commercial centre in the capital Algiers on August 29, 2015.

With its dimmed lights and thumping music, the bowling alley feels like a night club. Young men and women -- many of them without the traditional Islamic veil -- play billiards.

"I come to flirt," declares Rym, a young woman in a tight pair of jeans from the southeastern city of Constantine.

Meriem, 18, says she comes for the privacy afforded by a crowd.

"The great thing is there are lots of people, so it&39;s unlikely that you&39;ll bump into someone you know. Sometimes, I take my veil off and only put it back on when I leave. I&39;m not the only one."

Algerians sit at the food area of the Bab Ezzouar commercial centre in the capital Algiers on August 29, 2015.

In a country where three-quarters of the population is under 35, new malls are sprouting up for youths like Rym and Meriem who don&39;t have many other places to hang out.

Attracted by Algeria&39;s economic growth and rising income levels, investors have recently opened shopping centres in the capital, second city Oran and the northeastern city of Setif, with others planned or under construction.

"They&39;re not just somewhere to shop but also somewhere to socialise," explains Tahar Drici, a sociologist at the University of Algiers.

At the end of the 1990s, Algerians started to emerge from a devastating decade of civil war between the army and Islamists.

"The end of terrorism has made people want to enjoy life and go out, and these centres have made it possible, as young men and women can meet there to flirt far from the disapproving gaze of relatives."

The manager of a provincial shopping centre agrees: "It&39;s not uncommon to see youth of all ages flirting in our centres. It&39;s the perfect place for it."

"Young women can tell their parents that they&39;re going shopping without it sounding suspicious."

Algerians spend time at the entertainment area of the Bab Ezzouar commercial centre in the capital Algiers on August 29, 2015.

Despite signs of opening up, Algerian society remains "conservative, traditional and hierarchical", says Drici, the sociologist.

Couples embracing or holding hands in the capital&39;s streets or on public transport are a rare sight -- even if this was fairly common before Islamism swept over Algeria in the late 1980s.

In the malls, "the signs are mostly Western and sell a lifestyle and fashion different from Algerian society&39;s traditional values," Drici says.

But youths are not the only visitors of these new temples of consumption.

Clients of all ages flock to the malls, where families can share a pizza while watching their children run around a playing area.

Up to 7.6 million people have visited the capital&39;s Bab Ezzouar centre since it opened, equivalent to an average of 21,000 customers per day, says Alain Rolland, the Swiss director of the Company of Algerian Shopping Centres that owns it.

An Algerian couple walks past a shop at the Bab Ezzouar commercial centre in the capital Algiers on August 29, 2015.

Barely six kilometres away, in the Algiers Bay, many gather on the terrace of the Ardis commercial centre to admire the sun set over the water.

The mall overlooks the Sablettes, a beach celebrated by Algerian-born French writer Albert Camus that was recently cleaned up after years of neglect.

As in many other emerging economies, enthusiasm for these shopping centres does not seem set to dwindle any time soon.

Investors are already planning to open a new mall -- complete with skating rink, cinemas and theme park -- in Baraki, a southern neighbourhood of Algiers that just two decades ago was overrun by Islamist armed groups.