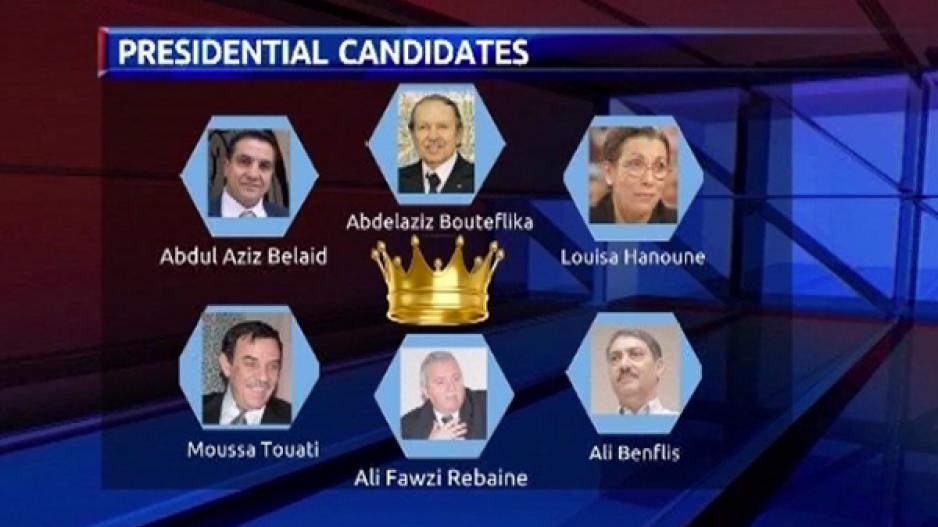 This, despite seldom appearing on the campaign trail with five other candidates contending for the coveted position.

Profiles of the six candidates:

Born in Morocco on March 2, 1937 to a family of Algerian origin, he enlisted with the National Liberation Army in 1956 to fight against Algeria&39;s French colonial rulers in the war of independence.

After independence in 1962, he served in parliament and at the age of 25 was appointed minister of sports and youth, and later as foreign minister.

The last few years of his rule as president have been dogged by corruption scandals implicating members of his inner circle and serious concerns about his health.

In April 2013, he was hospitalised in Paris after suffering a mini-stroke, returning home three months later looking frail.

Since then he has chaired just two cabinet meetings and has only very rarely been seen in public, always appearing seated, his voice barely audible.

His candidacy has drawn sharp criticism in Algeria, from youth activists to senior political figures.

Benflis, 69, is considered Bouteflika&39;s key challenger. A former prime minister, he decided to stand in the election following a 10-year absence from politics after he lost the 2004 poll.

Born in eastern Algeria on September 8, 1944, Benflis studied law, served as a justice minister and co-founded Algeria&39;s League of Human Rights in the 1980s.

In 1999, he ran Bouteflika&39;s campaign as a trusted aide who later headed the ruling National Liberation Front. But in 2004 he ran against the president and won only 6.4% of the vote, while Bouteflika was re-elected with 85%.

The only woman in the race is a 60-year-old member of parliament and a prominent leftist politician who ran in two previous presidential contests.

Born 7 April 1954 in eastern Algeria, Hanoune heads the Workers Party and co-founded an association for equal rights between the sexes in 1989.

She was arrested twice in the 1980s when she worked for a clandestine socialist workers&39; group.

Touati, 60, set up the Algerian National Front in 1999 and is a former soldier who was trained in Syria and in Libya.

He has stood as a candidate in two previous presidential elections.

Born 3 October 1953 in central Algeria, he worked for the customs authority and has headed a committee set up to defend the interests of children of those killed in the war of independence.

In 1985, he was arrested and sentenced to 13 years in prison on charges of undermining state security and membership of an illegal association. He was freed under a presidential pardon two years later.

This is the third time he has stood in a presidential election.

A first-time challenger for the presidency, Belaid is the youngest of the six candidates at 50.

He has headed the opposition El-Moustakbel Front since 2012, after quitting the ruling National Liberation Front, which he joined when he was 23.

He has degrees in medicine and law.

Belaid was born on 16 June 1963 in Batna, the hometown of key challenger Benflis.