Amisom struggles with resources in Somalia 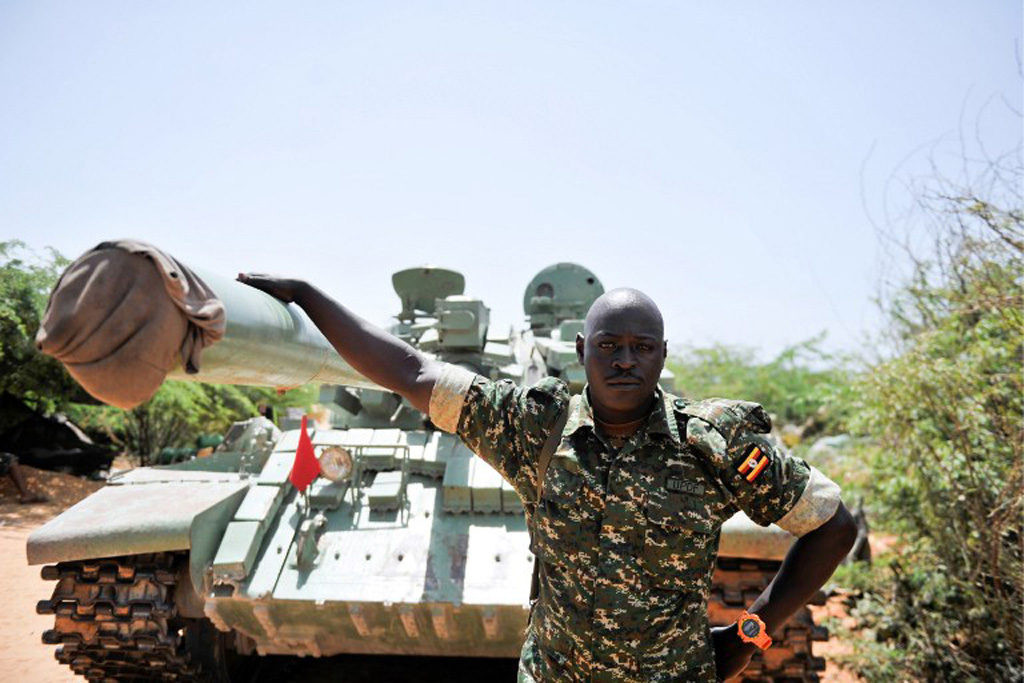 A handout photo taken on February 12, 2016 and released by AMISOM shows a Ugandan soldier serving under the African Union Mission in Somalia (AMISOM) standing in front of a battle tank in the Somali port city of Merca, Lower Shabelle Region, Somalia.

KAMPALA – Al-Shabaab militants are on the run from the African Union peacekeeping force in Somalia (AMISOM) in some parts of the country, but these successes are being challenged by funding cuts by the European Union (EU), stretched resources and a shortage of essential military equipment.

The difficulties facing AMISOM come as the organisation continues to train police in the fight against Islamist militants who have ravaged Somalia for decades.

On Monday at least 200 Somali police recruits began an official three-month training course in Jubaland, an autonomous region in the south of Somalia.

AMISOM has succeeded in largely ridding Jubaland of the religious extremists after 25-years of war allowing citizens to begin leading normal lives.

The Somali police recruits are the first batch of 600 police officers expected to be trained over the next year.

The officers will be deployed to different parts of the region, once they graduate, to help stabilise the country and maintain law and order.

The ceremony to mark the commencement of the programme was attended by officials from the Federal Government of Somalia, the regional Interim Jubaland Administration (IJA), AMISOM and the United Nations Assistance Mission in Somalia (UNSOM).

The training is being conducted by AMISOM Police in partnership with the Somali Police Force, and the IJA, and supported by the United Nations Office for Project Services (UNOPS) and the UK Department for International Development (DFID).

AMISOM Police, in support of early recovery and stabilisation, has deployed a specialised police team in Kismayo in Jubaland to assist IJA in rebuilding, restructuring and upgrading law enforcement infrastructure to internationally accepted standards.

However, these positive developments are being challenged by the EU’s announcement last month that it would be cutting funding to AMISOM.

“The EU has made lots of effort to cope with all of AMISOM’s increasing demands,” said EU spokesperson for international cooperation and development, Alexandre Polack.

“There is a need, however, for the African Union to look into additional sources of funding for
AMISOM for two main reasons: first, the EU is called to support other African peace and security priorities and second, the EU’s African Peace Facility needs to keep enough financial flexibility to respond to new crises that may emerge in Africa,” added Polack.

The EU covers the full cost of payments to AMISOM soldiers through contributions it makes to the AU, amounting to $200 million annually, reported The East African.

AMISOM soldiers receive a monthly allowance of $828 after their respective governments deduct a $200 administrative cost per soldier. The EU cut would take a further $165 out of the pocket of each AMISOM soldier.

Following the EU’s decision AMISOM chief Francisco Caetano Jos Madeira expressed grave concern and told the United Nations Security Council (UNSC) last week, from Addis Ababa, that AMISOM “was doing its utmost to make up for the pay loss” which amounted to a 20 per cent cut.

The AU’s UN envoy, Tete Antonio, further warned the UNSC that the pay cuts would seriously affect the morale of AMISOM’s approximate 22,000 troops at a time when they were suffering casualties in regular attacks by Al-Shabaab.

The attacks have been exacerbated by Al-Shabaab’s use of improvised explosive devices aggravated by AMISOM’s shortages of helicopters and other military equipment.