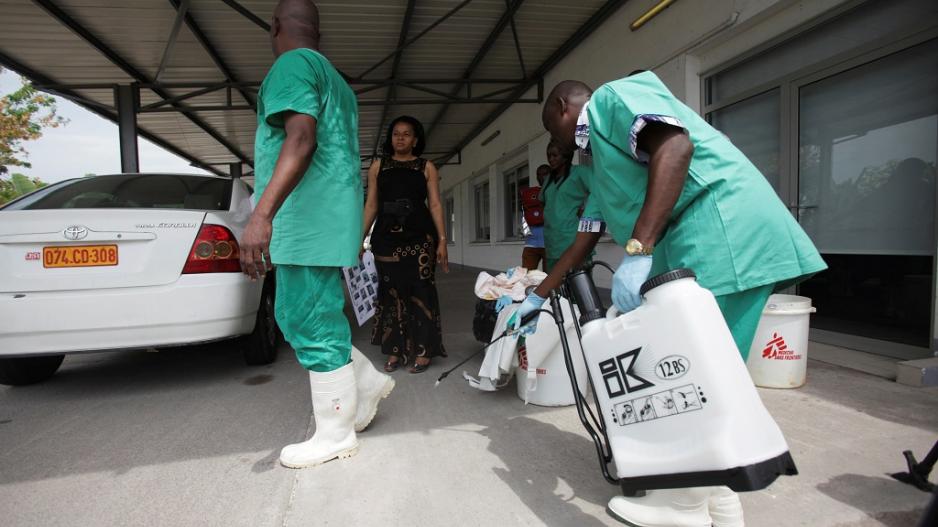 A health worker sprays a colleague with disinfectant during a training session for Congolese health workers to deal with Ebola virus in Kinshasa 21 October 2014.

GENEVA, Switzerland - African health authorities said Tuesday they are preparing to send anthropologists to Democratic Republic of Congo to ensure a vaccination campaign against a deadly Ebola outbreak runs smoothly.

"If we do not handle communication well, the vaccination programme may suffer," John Nkengasong, head of Africa Centres for Disease Control (Africa CDC), told reporters in Geneva.

"So we are also assessing how in the next two weeks or so to deploy anthropologists to support the vaccine efforts," he said.

His comments came a day after the Congolese government began using a prototype vaccine as part of a bid to contain and roll back the outbreak that has killed 27 people.

So far, there have been 51 cases since the outbreak was declared on May 8, it said. Of these, 28 cases have been confirmed, 21 are probable and two are suspected.

One of the world&39;s most notorious diseases, Ebola is a virus-caused haemorrhagic fever that in extreme cases leads to fatal bleeding from internal organs, the mouth, eyes or ears.

Last Thursday, a first case was reported in Mbandaka - a city of around 1.2 million people that lies on the Congo River, where it is a transport hub to Brazzaville and Kinshasa downstream and to Bangui, upstream.

"We continue to be very concerned," Nkengasong said.

He said Africa CDC was in the process of deploying 25 epidemiologists to the affected areas to assist the World Health Organization, Doctors Without Borders (MSF) and others trying to stem the outbreak on the ground.

He said China&39;s CDC had also said it would send five staff, and the US CDC had also indicated it was prepared to send in staff to help.

READ: Nigeria, DRC match to go ahead despite Ebola fears

But he acknowledged it remained unclear whether people on the ground would follow instructions on how to best protect themselves and others against the deadly virus.

Nkengasong said Africa CDC was closely following how people reacted to the vaccination efforts to determine how many anthropologists were needed.

"We will be looking ... especially based on what we learn from the first week of vaccination what numbers will be appropriate," Nkengasong said.

During the deadliest-ever Ebola outbreak, which killed more than 11,300 people in three West African countries from 2013-2015,  an initial lack of understanding of cultural norms by the first responders fuelled suspicion on the ground.

Many people refused to follow best-practice instructions for reining in the outbreak.

"We are dealing with human behaviour," Nkengasong said, adding: "that is why we think that having anthropologists associated with Africa CDC&39;s response is very critical."