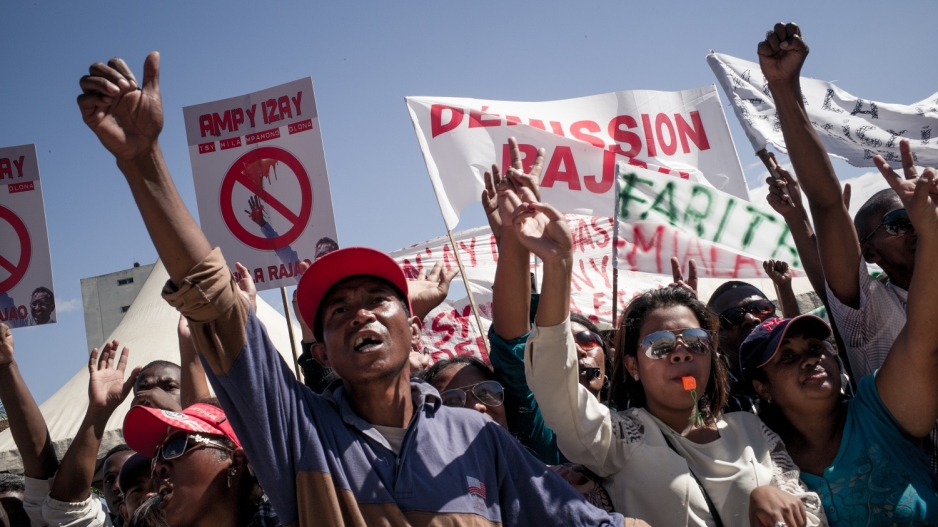 Supporters of Madagascar opposition demonstrate on a fifth straight day of anti-government protests on April 25, 2018 in Antananarivo, calling for the president to step down.

ANTANANARIVO, Madagascar - More than 1,000 opposition activists rallied in Madagascar&39;s capital on Saturday demanding the resignation of the president on the eighth straight day of anti-government protests in which at least two people have died, AFP reporters said.

Seven months ahead of presidential and legislative elections, the opposition accuses the government of trying to elbow them out of the race through new electoral laws they claim benefit the incumbent.

They allege that the new laws could bar some candidates from standing in the presidential election.

Crowds gathered at a square in front of the capital Antananarivo&39;s town hall, calling on President Hery Rajaonarimampianina to quit.

"We should actually drop the term &39;president&39; from our banners, because for us Rajao is no longer the president of the republic," said opposition MP, Lanto Rakotomanga to applause from the crowd.

Opposition lawmakers have asked the country&39;s constitutional court to examine the new electoral laws and to dismiss Rajaonarimampianina.

Two people were killed and at least 16 people wounded on the first day of the protests last week, which the president denounced as an attempted coup.

Authorities had declared that protest illegal, but about 1,000 opposition activists defied the order and security forces used tear gas to break up the gathering.

The large Indian Ocean island, which has been beset by decades of political instability, is due to hold polls in late November or December.

Elected in 2013, Rajaonarimampianina has not yet announced whether he will stand for re-election.

But two former heads of state have already said they would contest: Marc Ravalomanana, who was president from 2002 to 2009, and Andry Rajoelina, who removed Ravalomanana during a coup.

Both were barred from running in 2013 and their parties have been involved in the demonstrations.

Representatives of both the president&39;s party and of the opposition had met on Wednesday to try to find a solution to the crisis, but to no avail.