Are Maggi noodles safe to eat? 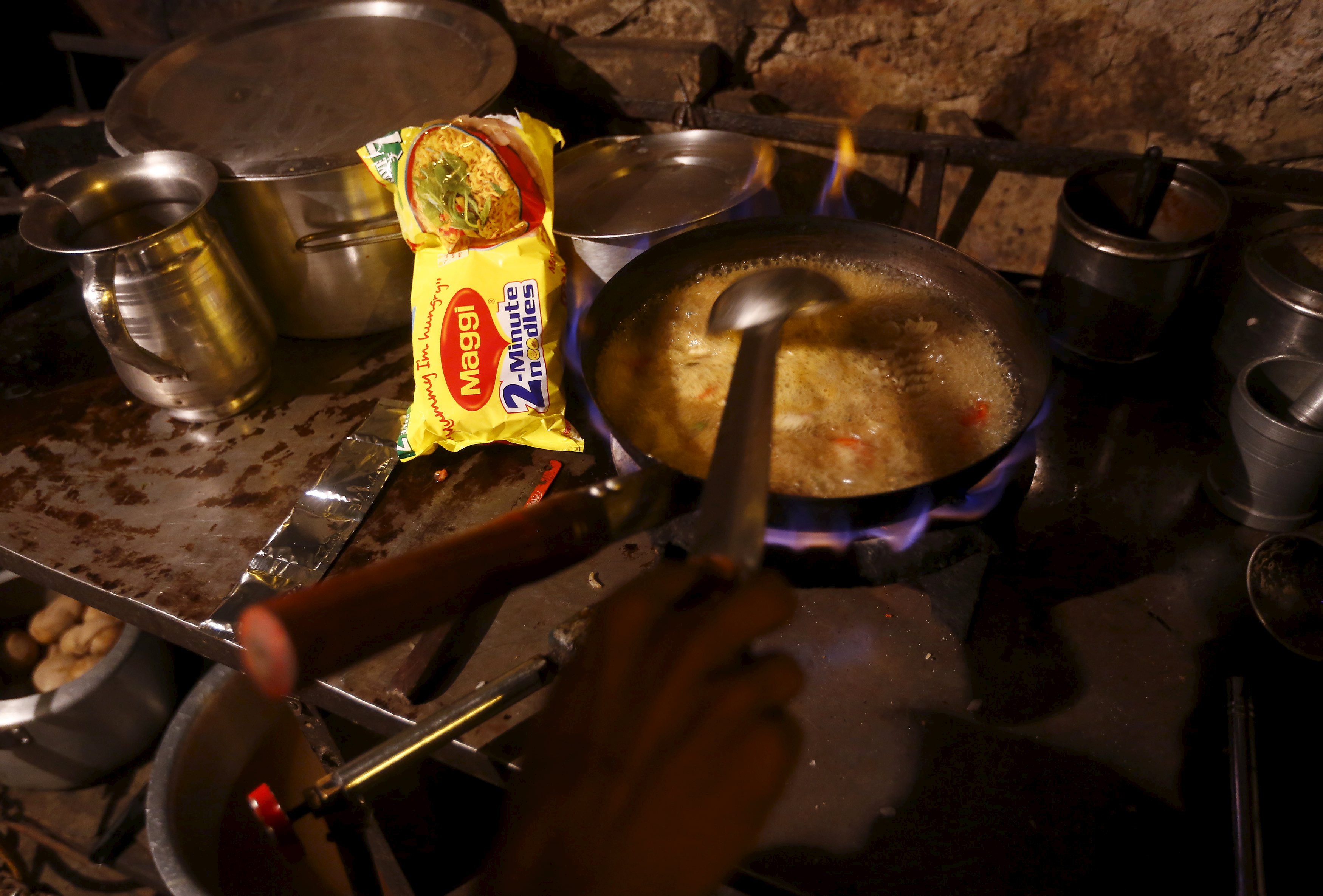 A vendor prepares Maggi noodles at a roadside eatery in New Delhi, India, June 7, 2015. India's government has filed for damages from food group Nestle after a food scare involving reports of excess lead in Maggi noodles forced a nationwide recall.

JOHANNESBURG - East Africa&39;s top retail chain Nakumatt has confirmed that it has withdrawn Maggie noodles from its shelves.

It says it has embarked on a voluntary withdrawal of the Indian-made version of the product from its shops in Kenya, Uganda, Tanzania, Rwanda and South Sudan after demands from a Kenyan consumer group over food safety.

The Consumers Federation of Kenya says the Kenya Bureau of Standards (KEBS) has grudgingly acted on the lead-poisoned Nestle "Maggi" noodles by issuing a verbal recall.

"Nakumatt, Naivas and Tuskys supermarkets heeded to Cofek&39;s call for voluntary withdrawal of the product that remains a threat to lives of millions of Kenya&39;s children," the organisation said on its website.

It said public health authorities had issued a seizure directive on all Maggi noodles.

The company referred its customers with queries to the following Q&A on that company’s website.

We have carried out extensive tests of our Maggi noodles in India in addition to our regular testing of the finished product and raw materials which is why we are saying the products are safe for consumption.

Nestl India has tested around 1,000 batches of Maggi noodles in our own laboratories and also asked an independent lab to test an additional 600 product batches. These tests covered batches totalling 125 million or 12.5 Crore packets of noodles in total. These tests found that levels of lead in the products were within the food safety limits specified by the Indian authorities.

A: If it’s safe, why are you recalling the product?

In India we have been asked by the regulator to recall the product and we have stopped selling it. In fact, before the order was issued, Nestl India had announced it had stopped selling Maggi noodles. This is because recent developments and growing concerns about the product have led to confusion for the consumer to such an extent that Nestl India felt it was necessary to take the product out of the market while we engage closely with the regulators and others to discuss the situation.

Q: Are you challenging the Indian authorities test results?

A: We are not in any way trying to criticise the Indian authorities whom, like ourselves, are doing all they can to protect the consumer. Nestl India has held discussions with the regulators to explain our testing methodologies and to discuss the different results which have been obtained by us and by their teams. We follow the international testing procedures set out by the Codex Alimentarius organisation in every country where we operate, including India. We are working closely with the regulators to resolve the situation.

Q: Why did you take so long to recall the product?

A: Nestl India&39;s initial focus was to engage with the authorities to share information about our tests and to understand better why their results were different to the company&39;s. Nestl India then decided to take the product off the shelves nationwide in view of recent developments and concerns around the product, which was leading to an environment of confusion for the consumer. This, Nestl India believes, is not a conducive environment to have the product in the market.

Q: What about the Maggi noodles packs I have at home now? Do I need to return them?

Q: If you are taking the product off the market why are you challenging states decisions to ban you in the courts at the same time?

A: Nestl India has stopped selling the product but has begun legal action in one state against an order concerning manufacturing it believes is unlawful.

Q: When will Maggi noodles be back on the market?

A: We are working hard to resolve the situation and we aim to be back in the market as soon as we can.

Q: What about the countries you export Indian Maggi noodles too? Will you be recalling the product from those markets too?

Nestl India currently exports small quantities of Maggi noodles to the US, Canada, UK, Australia, Singapore and Kenya. We are working closely with the regulators in each country to explain the situation in India and, where they want to test the products, we are cooperating fully with them. We also manufacture Maggi noodles in other countries and these are not affected by the situation in India.

Q: Why is there any lead at all in Maggi noodles?

A: Trace amounts of lead are present in the environment worldwide due to environmental contamination. The authorities have set firm limits to ensure that any lead present in a finished product are within recommended food safety levels and safe to consume.
We regularly monitor all our raw materials for lead, including testing by accredited laboratories. These tests have consistently shown lead in Maggi noodles to be within safe limits. In addition to testing both raw materials and finished products for lead, we carry out extensive research on lead and contribute to global efforts to assure safety in this area. Food safety is Nestl’s number one priority. We do more food testing than any other entity in the world and have many stringent controls to guarantee safety: starting from the raw materials we use, throughout processing to packaging. We adhere to the same quality standards wherever in the world we operate.

Q: Why did the authorities find MSG in your product when it says &39;no added MSG&39; on the label?

A: We do not add the flavour enhancer MSG (E621) to Maggi noodles in India. However, the product contains glutamate from hydrolysed groundnut protein, onion powder and wheat flour. Glutamate produces a positive result in a test for MSG.

A: It was not our intention to mislead consumers but we understand that the positive result in a test for MSG has led to concern among people who buy the product.

Q: But by saying ‘no added MSG’ on the label weren’t you just trying to get around the labelling regulations?

A: No. We were not trying to ‘get around’ the labelling regulations. In response to consumer preference for products without MSG we took the decision that, where none was added, we should make this clear on the label by stating ‘no added MSG’. This is common practice followed by the food industry and complies with Indian food law and regulations.

It is clear that our labelling has led to some confusion and we are fully engaged with the authorities and the food industry to resolve the situation.

Q: What is the difference between monosodium glutamate (MSG) and glutamate?

A: The amino acid L-Glutamate is one of the most abundant and important amino acids of proteins. It is found in all foods that contain protein, such as cheese, milk, mushrooms, meat, fish, and many vegetables. The natural flavour-enhancing levels of glutamate in food varies greatly, but are high in foods such as tomatoes, mushrooms, soy sauce and fish sauce.

Monosodium glutamate, abbreviated as MSG, was discovered more than a century ago by the Japanese scientist Kikunae Ikeda, who gave this unique taste the name “umami”, the fifth taste beside sweet, sour, salty and bitter. Today, MSG is mostly produced by a natural fermentation process that has been used for centuries to make such common foods as beer, vinegar and yogurt.

Q: Are MSG or glutamate unsafe?

A: None of the many scientific studies carried out over the last 30 years has shown a link between MSG intake and adverse reactions such as ‘Chinese Restaurant Syndrome’. The international World Health Organisation/UN Food and Agriculture Organisation’s evaluation committee, the European Commission’s Scientific Committee for Food and the United States Food and Drug Administration have affirmed that MSG is safe under common conditions of use.
There have been some concerns raised about the contribution of MSG to sodium intake via the diet. However, MSG contains only about one-third the amount of sodium as table salt (13 percent vs. 40 percent) and so where we use it in products, in combination with a small amount of table salt, MSG can help reduce the total amount of sodium in a recipe by 20% to 40%, while maintaining an enhanced flavor. The level of glutamate for example in Maggi noodles is around 0.2 g/100 g, which is close to the average level of glutamate measured in the same portion size of tomatoes or peas.

Q: So if it is safe, why say on labels that no MSG has been added to a product?

A: In response to consumer preference for products without MSG we have taken the decision that where none is added we should make this clear on the label. However in view of the recent confusion when the product returns to the market it will not contain this claim.

Q: What are you doing to reduce MSG?