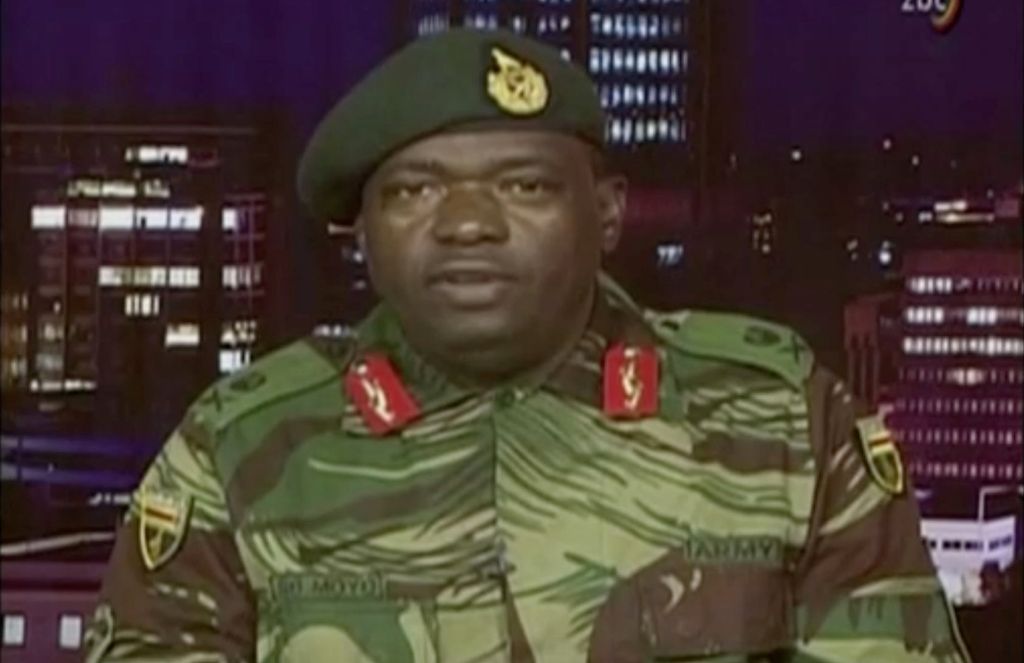 HARARE - Soldiers deployed across the Zimbabwe capital Harare and seized the state broadcaster on Wednesday after 93-year-old President Robert Mugabe&39;s ruling Zanu-PF party accused the head of the military of treason, prompting frenzied speculation of a coup.

The army asserted that President Mugabe was safe and was not a target of their actions.

Zimbabwe has just experienced its first coup. This type is called a guardian coup but whatever name it&39;s a coup. pic.twitter.com/HdwRInxeci

However, the military detained Finance Minister Ignatius Chombo on Wednesday morning as part of their attempt to root out "criminals" around the president who it said were causing social and economic suffering, a government source said.

Chombo is a leading member of the so-called &39;G40&39; faction of the ruling Zanu-PF party, led by Mugabe&39;s wife Grace, that had been vying to succeed the 93-year-old president.

In a broadcast at around 3.30 CAT, an army spokesperson said, "We intend to protect everyone of you...

"To the judiciary, the measures underway are intended to ensure that as an independent arm of the state you are able to exercise your independent authority without fear of being obstructed, as has been the case with this group of individuals.

"To our members of parliament, your legislative role is of paramount importance for peace and stability in this country, and it is our desire that a dispensation is created that allows you to serve your respective political constituencies according to democratic tenets.

"To the generality of the people of Zimbabwe, we urge you to remain calm and limit unnecessary movement.

However, we encourage those who are employed and those with essential business in the city to continue their normal activities as usual. Our wish is that you will enjoy your rights and freedoms and that we return our country to a dispensation that allows for investment, development and prosperity that we all fought for and for which many of our citizens paid the supreme sacrifice.

"To political parties, we urge you to discourage your members from engaging in violent behaviour. To the youth, we call upon you to realise that the future of this country is yours. Do not be enticed with the dirty coins of silver, be disciplined and remain committed to the efforts and values of this great nation.

"To all churches and religious organisations in Zimbabwe we call upon your congregations to pray for our country and preach the gospel of love, peace and unity and development.

"To both our people and the world beyond our borders, we wish to make this abundantly clear this is not a military takeover of government.

"What Zimbabwe defence forces is doing is to pacify a degenerating political, social and economic situation in our country."

Just 24 hours after military chief General Constantino Chiwenga threatened to intervene to end a purge of his allies in Mugabe&39;s ZANU-PF, armoured personnel carriers were seen on main roads around the capital.

Despite the troops stationed at locations across Harare, there was no word from the military as to the fate of Mugabe, Zimbabwe&39;s leader of the last 37 years and the self-styled &39;Grand Old Man&39; of African politics.

In contrast to his elevated status on the continent, Mugabe is reviled in the West as a despot whose disastrous handling of the economy and willingness to resort to violence to maintain power destroyed one of Africa&39;s most promising states.

In the only official word from the government, Isaac Moyo, Zimbabwe&39;s ambassador to neighbouring South Africa, earlier dismissed talk of a coup, saying the government was "intact" and blaming social media for spreading false information.

The US embassy issued a cautionary, urging its citizens to stay indoors until the situation had stabilised.

The Southern African nation has been on edge since Monday when Chiwenga, Commander of the Zimbabwe Defence Forces, said he was prepared to "step in" to end a purge of supporters of sacked vice president Emmerson Mnangagwa.

Only a few months ago, Mnangagwa, a former security chief nicknamed "The Crocodile", was favourite to succeed his life-long political patron but was ousted a week ago to pave the way for Mugabe&39;s 52-year-old wife Grace to succeed him.

"Politics over the gun"

Chiwenga&39;s unprecedented statement represented a major escalation of the struggle to succeed Mugabe, the only leader Zimbabwe has known since it gained independence from Britain in 1980.

Mugabe chaired a weekly cabinet meeting in the capital on Tuesday, officials said, and afterwards ZANU-PF said it stood by the "primacy of politics over the gun" and accused Chiwenga of "treasonable conduct ... meant to incite insurrection."

The previous day, Chiwenga had made clear the army&39;s refusal to accept the removal of Mnangagwa - like the generals a veteran of Zimbabwe&39;s anti-colonial liberation war - and the presumed accession of Grace, once a secretary in the government typing pool.

Local government minister Saviour Kasukuwere, a leading figure in her relatively youthful &39;G40&39; faction, refused to answer Reuters questions about the situation in Harare. "I&39;m in a meeting," he said, before hanging up shortly before midnight.

Neither Mugabe nor Grace have responded in public to Chiwenga&39;s remarks and state media did not publish his statement. The Herald newspaper posted some of the comments on its Twitter page but deleted them.

The head of ZANU-PF&39;s youth wing, which openly backs Grace, accused the army chief of subverting the constitution.

"Defending the revolution and our leader and president is an ideal we live for and if need be it is a principle we are prepared to die for," Youth League leader Kudzai Chipanga said at the party&39;s headquarters in Harare.

Grace Mugabe&39;s rise has brought her into conflict with the independence-era war veterans, who enjoyed privileged status in Zimbabwe until the last two years when they spearheaded criticism of Mugabe&39;s handling of the economy.

In the last year, a chronic absence of dollars has led to long queues outside banks and an economic and financial collapse that many fear will rival the meltdown of 2007-2008, when inflation topped out at 500 billion percent.

Imported goods are running out and economists say that, by some measures, inflation is now at 50 percent a month.

According to a trove of intelligence documents reviewed by Reuters this year, Mnangagwa has been planning to revitalise the economy by bringing back thousands of white farmers kicked off their land nearly two decades ago and patching up relations with the likes of the World Bank and IMF.

Whatever the outcome, analysts said the military would want to present their move as something other than a full-blown coup to avoid criticism from an Africa keen to leave behind the Cold War continental stereotype of generals being the final arbiters of political power.

"A military coup is the nuclear option," said Alex Magaisa, a UK-based Zimbabwean academic. "A coup would be a very hard sell at home and in the international community. They will want to avoid that."