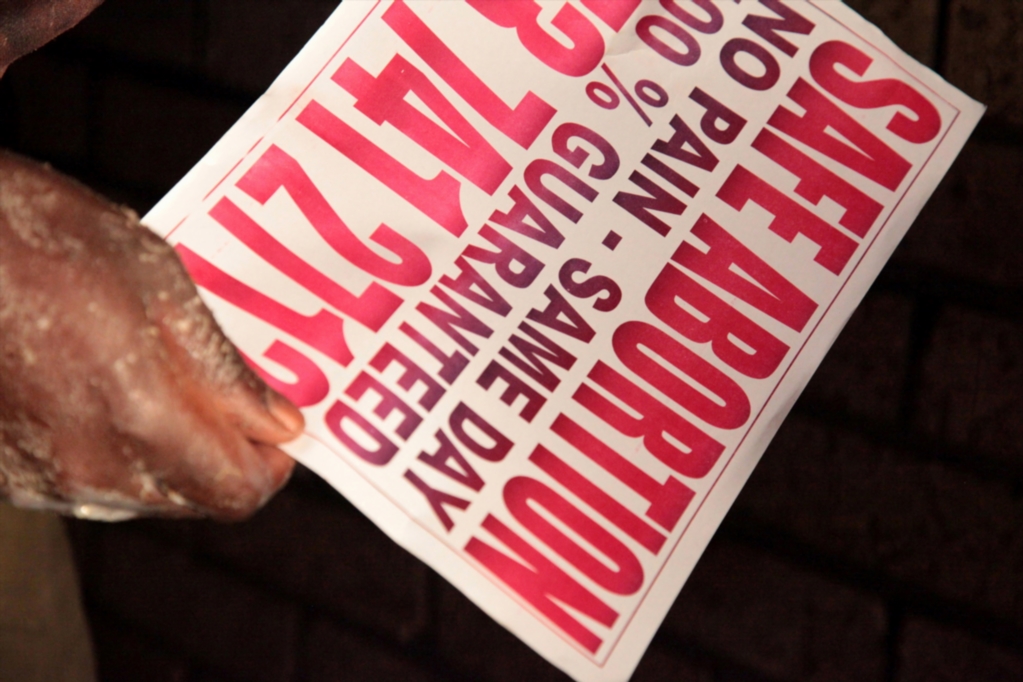 A man holds a poster offering "Safe Abortion" on May 26, 2012 in Mthatha, South Africa.The majority of underground doctors target young girls and women who often socialise and relax on the lawn at Town Hall.

BULAWAYO - When her 15-year-old daughter fell pregnant last year, Irene Ndlovu secretly arranged for an abortion before the pregnancy became visible so that she could continue with her education.

Abortions are only allowed in Zimbabwe if a woman&39;s life is in danger, if there is a risk that the child will be "seriously handicapped" or if the pregnancy was the result of rape or incest. Those who break the law can be jailed for five years.

"It was the only sensible thing to do at the time," Ndlovu, who declined to give her real name, told the Thomson Reuters Foundation. "Do I regret it now? I don&39;t know."

Abortion is controversial in Zimbabwe, a largely Christian nation, where more than 70,000 women undergo unsafe terminations each year, risking death from haemorrhage, infection or shock, according to the healthcare provider Marie Stopes International.

According to the United Nations (UN), Zimbabwe&39;s maternal mortality rate of 443 deaths per 100,000 live births is triple that of neighbouring South Africa, where abortion is legal.

"Abortion remains high on the causes of maternal mortality contributing about 16 percent [of] deaths," Bernard Madzima, head of family health in the health ministry, said in emailed comments.

Teenagers account for almost one in three of Zimbabwe&39;s abortion-related maternal deaths, he said, adding that the government recently completed a report on abortion prevalence "which will give us information on the way forward".

Madzima has previously told parliament that reviewing the abortion law is beyond the health ministry&39;s jurisdiction and would require inputs from cultural and religious leaders.

Priscilla Misihairabwi-Mushonga, a lawmaker who heads the parliamentary committee on women and youth, has been touring the country to collect views on abortion, which she said will be presented to parliament as part of the reform process.

"We have had a lot of conversations with these teenagers and most of them are not ready to be mothers," she said.

"But there is no option, so they end up going to illegal abortions and mess up their lives forever."

The demand for abortion is fuelled by the erosion of traditional cultural values as people migrate to towns and cities and increased need to limit family size, the UN says.

Although the law allows for abortion in cases such as rape, red tape makes it difficult for women and girls to receive the service in government facilities, said Jessie Majome, another female parliamentarian who favours legal reform.

If a pregnancy results from rape or incest, the law requires a magistrate to certify that the crime was reported to the police before allowing a woman to abort. In reality, police have to investigate the case and take it to court, campaigners say.

"I am concerned about the practical difficulty which often makes it impossible to access termination on legal grounds, especially for low-income victims," said Majome.

"A comprehensive evaluation of the Termination of Pregnancy Act is required in order to save lives."

Health workers say illegal abortions are easily available for those who can pay up to $500 (R6,300) in private clinics, as well as being advertised online and on city street signs.

"It makes sense to me to terminate the pregnancy of a 14- or 15-year-old. Is that child ready to have child," asked a doctor in Bulawayo, who declined to give his name, as he has performed illegal abortions.

"Parents come here all the time with such requests."