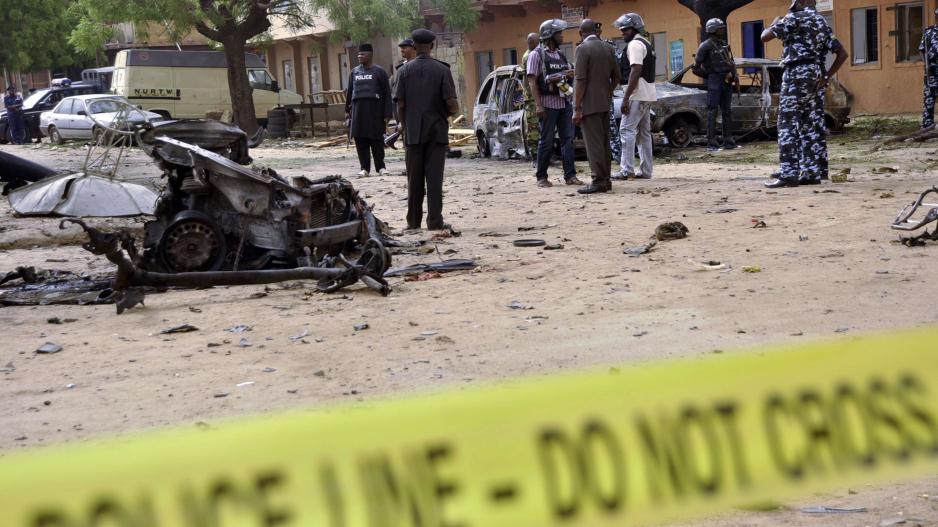 Policemen stand near damaged vehicles in Sabon Gari, Kano May 19, 2014. A suicide car bomber killed five people on a street of popular bars and restaurants in the northern Nigerian city of Kano on Sunday evening.

KANO – At least 15 people were killed in violence in northern and central Nigeria, police and local officials said on Thursday, in the latest unrest to hit the restive regions.

Police in Zamfara state said suspected cattle thieves killed 10 in raids on four remote villages on Wednesday - although a local resident said the toll was far higher - while nomadic cattle herders had killed five in Benue state since Tuesday.

The deadly violence has put President Muhammadu Buhari under pressure as elections approach in February next year. He was elected in 2015 on a promise to be tough on insecurity.

Police across the north and central states have meanwhile announced enhanced security for the end of the Muslim holy month of Ramadan, including extra patrols and officers.

Previous Eid celebrations have been hit by attacks from Boko Haram Islamists but there are fears of fresh violence in other areas hit by unrest.

In Zamfara, armed bandits stormed villages in the Birnin Magaji area in an apparent reprisal attack after local militia killed one of their number.

Police spokesman Mohammed Shehu told AFP "10 people were killed by the bandits". "From our reports, the attackers fled to the Rugu forest in neighbouring Katsina state," he added.

But local resident Dantani Bube, who lives in Dutsin Wake village, said: "We lost 26 people in the attacks on Dutsin Wake, Oho, Badambaji and Kabingiro."

Maishanu said local militia had earlier killed a suspected bandit at a market. Bandits then demanded the civilian vigilantes hand over those responsible but they refused.

Bube and Maishanu said the gang then traced the militia members suspected of the killing to the four villages.

In Benue state, the head of the Logo local government area Richard Nyajo said four people, including two brothers, were killed on Tuesday and a fifth on Wednesday.

He blamed cattle herders who he said had "taken over" forests in the area and had been ambushing victims on the road. Five people were killed in the same area last week.

Benue state has been at the epicentre of a resurgence of violence in the long-running resource conflict between nomadic herders and farmers.

According to the Armed Conflict Location and Event Data Project (ACLED), armed ethnic Fulani herders have been blamed for killing nearly 1,000 civilians this year.

Benue state police commissioner Fatai Owoseni warned against attributing the latest killings to the conflict and said it "could be normal crime".

Regardless of the cause, the extent of the government&39;s response to the violence has come under scrutiny, with many pointing the finger at Buhari for not doing enough to stop it.

In Zamfara, cattle rustling and kidnapping for ransom have been increasing in recent years, with herding and farming communities targeted.

Cattle has been stolen and residents who resist them killed. That has led to villagers forming civilian militia groups as protection.

But they, too, have been accused of abuses and killings of suspected thieves, leading to tit-for-tat attacks.

Buhari has been accused of failing to act against Muslim Fulani herders as they are his kinsmen.

He said it was "too simplistic to see the conflict as ethnic or religious" and blamed the tensions on changing demographics that has increased pressure for land and water.