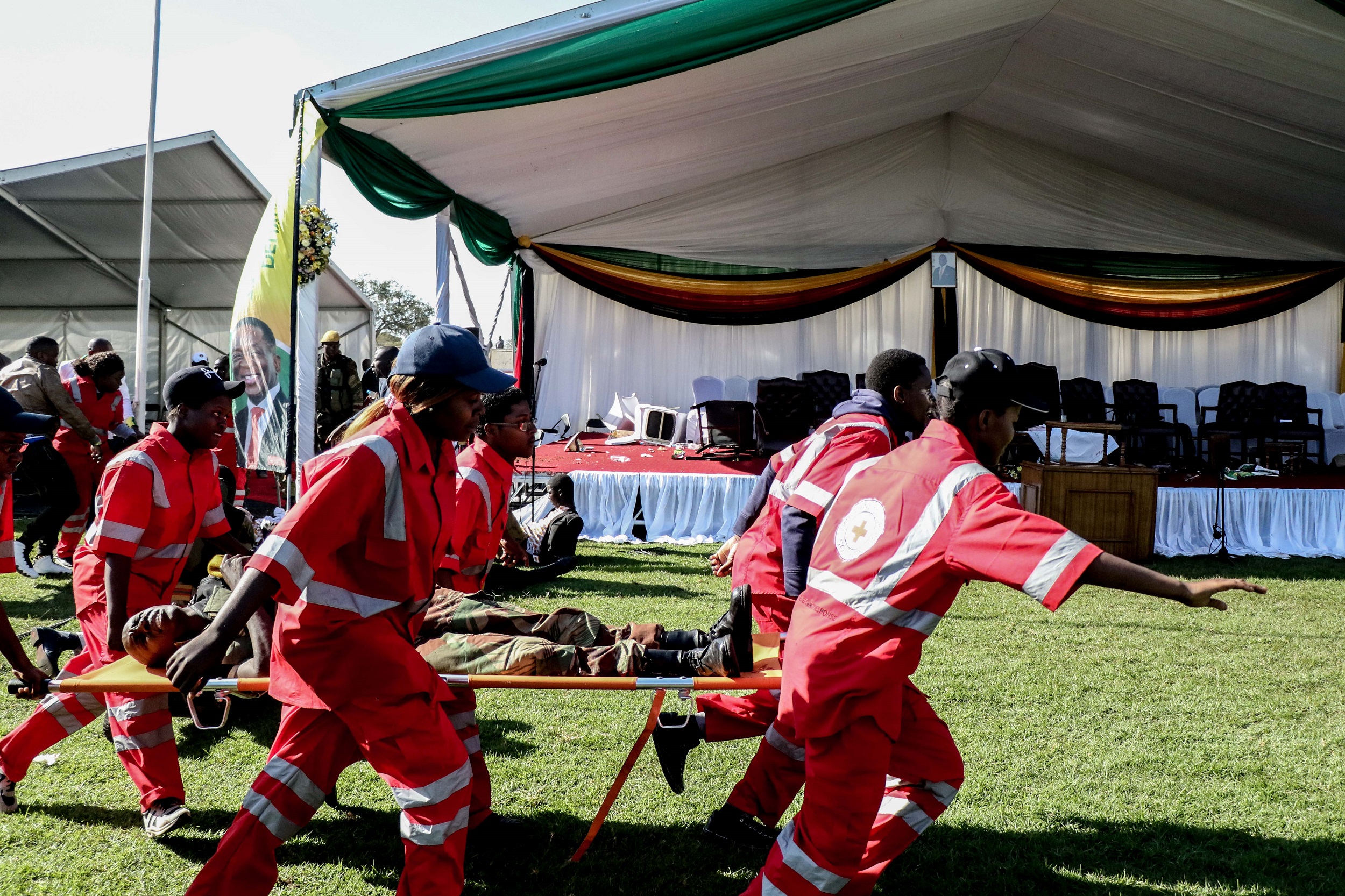 Injured people are evacuated after an explosion at the stadium in Bulawayo where Zimbabwean President Emmerson Mnangagwa addressed a rally.

BULAWAYO – A blast that rocked a rally in which Zimbabwe&39;s President Emmerson Mnangagwa narrowly escaped unscathed injured at least 41 people, including his two deputies, the health minister told a state Sunday paper.

Health Minister David Parirenyatwa, said wounded rallygoers had been treated at three main hospitals across the city and "a total of 41... have so far approached our health institutions complaining of injuries".

Footage circulating on social media showed an explosion and plumes of smoke around the president as he descended stairs from the podium at the city&39;s White City stadium.

Mnangagwa said he was the target of the attack, which also injured Vice-Presidents Kembo Mohadi and Constantino Chiwenga.

The device "exploded a few inches away from me -- but it is not my time", the president told state broadcaster on Saturday night, blaming the attack on his "mortal enemies".

"These are my mortal enemies and the attempts have been so many.

"It’s not the first attempt (on) my life. I&39;m used to it. Six times my office has been broken into; cyanide was put in my offices so many times. I will continue."

The health minister said some of those wounded had lost limbs and some would require "serious surgery", suggesting the number of injured could rise as the government was still consolidating numbers from the various hospitals.

"We have no fatalities so far," said Parirenyatwa.

Mnangagwa, who was quickly rushed away from the scene of the explosion, later visited the injured in hospital.

While Bulawayo has long been a bastion of opposition to the ZANU-PF and it was Mnangagwa&39;s first rally in the city, commentators suggest the attack could have been instigated by internal ructions within the ruling party.

READ: It&39;s not my time, says Mnangagwa after explosion

The polls in five weeks will be the first since Zimbabwe&39;s veteran leader Robert Mugabe resigned following a brief military takeover in November last year after 37 years in power.

The intervention by the army was led by Chiwenga who was then head of the armed forces.

The vote will be a key test for Mnangagwa, 75, who succeeded the 94-year-old autocrat and remains untested at the ballot box.

He has pledged to hold free and fair elections as he seeks to mend international relations and have sanctions against Zimbabwe dropped.

Previous elections in Zimbabwe have been marred by electoral fraud, intimidation and violence, including the killing of scores of opposition supporters in 2008.