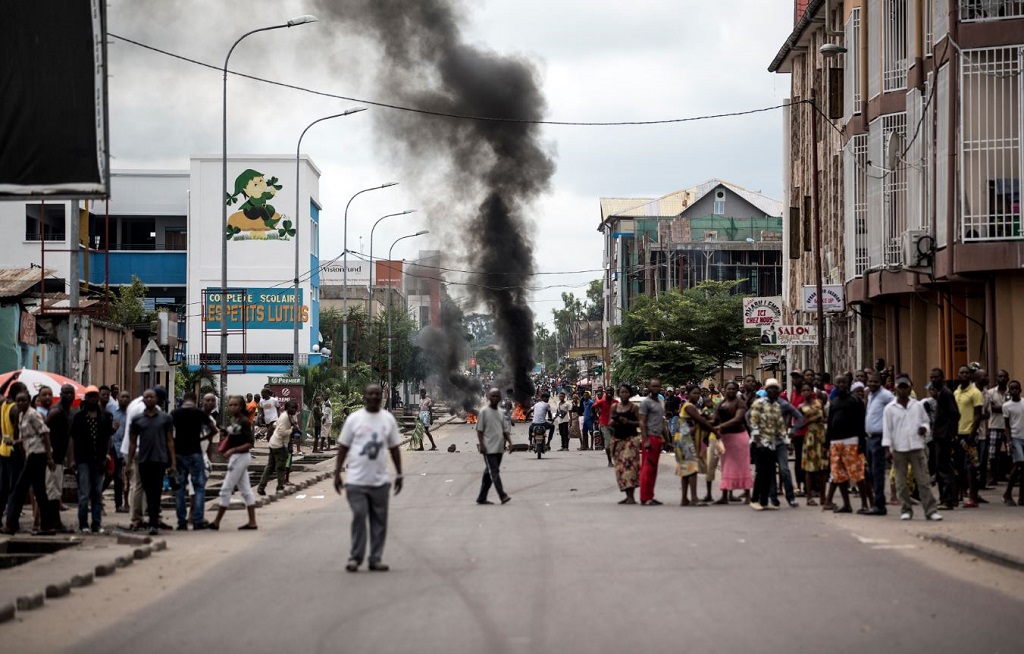 People look on as protesters burn tyres during a demonstration calling for the President of the Democratic Republic of the Congo (DRC)to step down on January 21, 2018 in Kinshasa.

JOHANNESBURG - The United Nations report has accused the Democratic Republic of Congo of killing at least 47 people during anti-government protests over a 13-month period ending January 31, 2018.

UN human rights chief Zeid Ra’ad Al Hussein said in a Wednesday press release it was particularly disturbing that security services and defence forces could carry out such violence with almost full impunity which could be perceived as encouraging such repression.

“We are seeing the quashing of dissent at all costs – even at the cost of human life – in the DRC by the systematic deployment of armed forces alongside the Police Nationale Congolaise to handle protests,” added the UN High Commissioner for Human Rights.

DRC: Violence against protesters is committed w/ almost full impunity by security/defence forces – perhaps encouraging such repression. "We are seeing the quashing of dissent at all costs – even at the cost of human life”- Zeid https://t.co/RlASUFUNXv

While some people armed with sticks and broomsticks attempted to perpetrate violence during some protests, the vast majority of demonstrators were peaceful, according to the report published on Monday by the UN human rights wing and the UN peacekeeping mission in the African country.

The report concluded that the use of excessive force – including lethal force – by the authorities was thus “unlawful, unjustified and disproportionate”.

Between January 1, 2017, and January 31, 2018, at least 47 people, including women and children, were killed during demonstrations against incumbent President Joseph Kabila’s refusal to step down despite his mandate ending in December 2016.

"They were told to use all available means to quash protests and protect the president" - interview with @hrw researchers about new &39;Special Mission&39; report https://t.co/H7f2wND74H DRC Congo pic.twitter.com/AfUaf3YghI

There were also indications that Congolese security services had attempted to cover up these serious human rights violations by removing the bodies of victims and obstructing the work of national and international observers, the report stated.

The report described the lack of compliance with national law and international standards related to the use of force during the suppression of peaceful demonstrations.

Demands are stepped up for President Joseph Kabila to step down in the DRC. @AJEnglish AJNewsGrid reported on the security crackdown on church-led protests & internet shutdown. We also heard from @SeifMagango @TynaDolce @MichaelTshi @MrBasabose. pic.twitter.com/1T51khMd6U