Dozens dead in days of violence in Ethiopia's Oromiya region 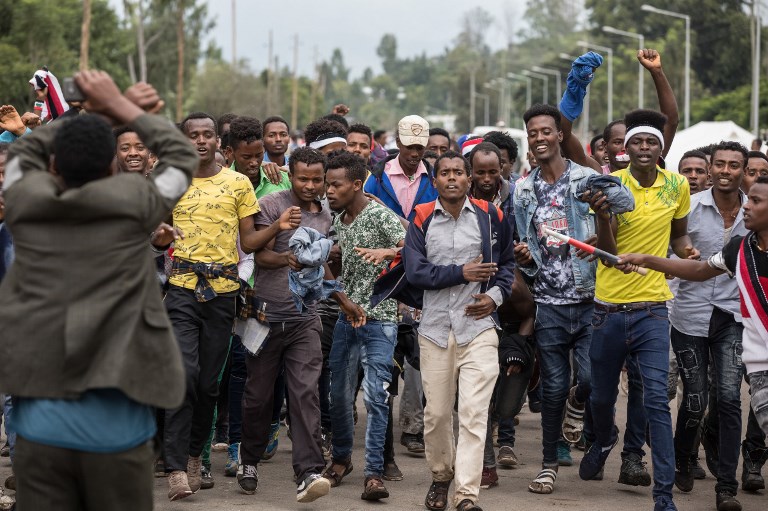 File: People protest against Ethiopian government during Irreecha, the annual Oromo festival to celebrates the end of the rainy season, in Bishoftu on October 1, 2017.

ADDIS ABABA - At least 61 people have been killed in clashes between different ethnic groups in Ethiopia&39;s Oromiya region, officials said.

The latest bout of violence highlights increasing instability in a province racked by bloody protests in 2015 and 2016.

The violence triggered revenge attacks by ethnic Oromos in another district, resulting in the killing of 32 Somalis who were being sheltered in the area following a previous round of violence.

"The region is working to bring the perpetrators to justice," the spokesman said in a statement.

The cause of the latest violence was not known, but it followed protests in Oromiya&39;s Celenko town where the region&39;s officials said 16 ethnic Oromos were shot dead on Tuesday by soldiers trying to disperse the crowd.

"We do not know who ordered the deployment of the military. This illegal act should be punished," said Lema Megersa, the region&39;s president.

The clashes are likely to fuel fears about security in Ethiopia, the region&39;s biggest economy and a staunch Western ally.

Lema&39;s comments also illustrate growing friction within Ethiopia&39;s ruling EPRDF coalition, since unrest roiled the Oromiya region in 2015 and 2016 when hundreds of people were killed.

At that time, the violence forced the government to impose a nine-month state of emergency that was only lifted in August.

The unrest was provoked by a development scheme for the capital Addis Ababa that dissidents said amounted to land grabs and turned into broader anti-government demonstrations over political and human rights.

It included attacks on businesses, many of them foreign-owned, including farms growing flowers for export.