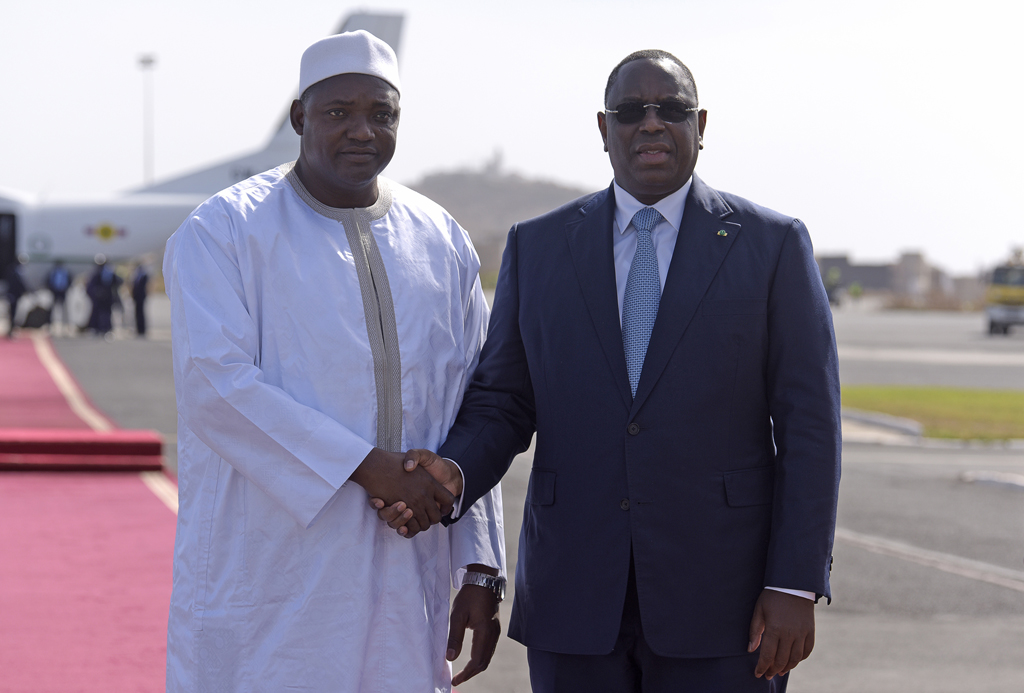 Senegal's President Macky Sall (R) shakes hands with the new President of Gambia Adama Barrow prior to leaving the Senegalese capital Dakar for The Gambia on 26 January 2017.

BANJUL - Jubilant Gambians on Thursday welcomed home their new President Adama Barrow, who was elected almost two months ago but forced to flee to Senegal when his predecessor refused to step aside.

Dressed in flowing white robes and cap, Barrow stepped off the plane, with heavily-armed troops from Senegal and Nigeria standing by as he flew in from neighbouring Senegal, where he had taken shelter on 15 January.

Barrow, who was accompanied by his two wives and some of his children, was welcomed by military officials and senior members of his coalition government.

READ: Tough times ahead for The Gambia

His return marks The Gambia's first democratic transfer of power and capped days of waiting in the tiny former British colony after longtime leader Yahya Jammeh had refused to leave after losing a 1 December vote.

Barrow took the oath of office at his country's embassy in Dakar a week ago and a multinational African force then entered The Gambia to ensure his safe return home and Jammeh's departure.

Hundreds gathered at the airport awaiting Barrow's arrival, with drummers and dancers firing up the crowds as Nigerian and Senegalese soldiers looked on.

"He will develop this country! He's good, not a killer," said Barrow supporter Adja Kombeh.

Gambians have said they were looking forward to their freedom after two decades of Jammeh's iron-fisted rule.

'He will be different'

"I'm 100 percent a Barrow supporter and I'm more happy than I can say," said Kanamo Sansou, sitting with his friends at Serrekunda market close to the capital Banjul.

"He will be different in all aspects... we have been living under dictatorship for 22 years," added pensioner Ibrahima Gaye.

"You can go home at night and sleep without worrying you will be arrested before daybreak," he said.

Barrow had not been seen in public since his swearing-in and has yet to publicly address Gambians.

Diplomats had urged Barrow to return quickly to curb the impact of the political crisis on the tourist-reliant economy, already in a fragile state.

The UN envoy for West Africa, Mohamed Ibn Chambas, who briefed the Security Council on The Gambia, stressed that the United Nations was working to bolster stability.

Barrow will be staying at his own residence until further notice while State House, Jammeh's former seat of power, is assessed for potential risks.

His first job is to deal with an internal crisis after it emerged his choice for vice president, Fatoumata Jallow-Tambajang, may be constitutionally too old for the role.

Around 4,000 west African troops remain in The Gambia charged with ensuring safety, as it is believed rogue pro-Jammeh elements remain in the security forces that were once under his personal control.

"President Adama Barrow has asked us to remain for two or three weeks to see if there are arms caches or mercenaries hiding out," said Marcel Alain de Souza, head of the 15-nation Economic Community of West African States (ECOWAS) commission.

ECOWAS is ready to muster a force of up to 7,000 troops, he said this week.

Jammeh finally left the country on Saturday and went into exile in Equatorial Guinea under threat of regional military intervention.

The authorities have accused the former strongman of plundering state coffers and making off with $11 million (R147-million euros).

But the new government has confirmed that Jammeh will be permitted to keep a fleet of luxury cars, including two Rolls Royces.

Barrow has told Jammeh he will have all the rights legally ensured to an ex-president, which under Gambian law include immunity from prosecution, barring a vote by two-thirds of the national assembly.

However Chambas said there was nothing in the UN-backed agreement that paved the way for Jammeh's departure that gave him immunity.