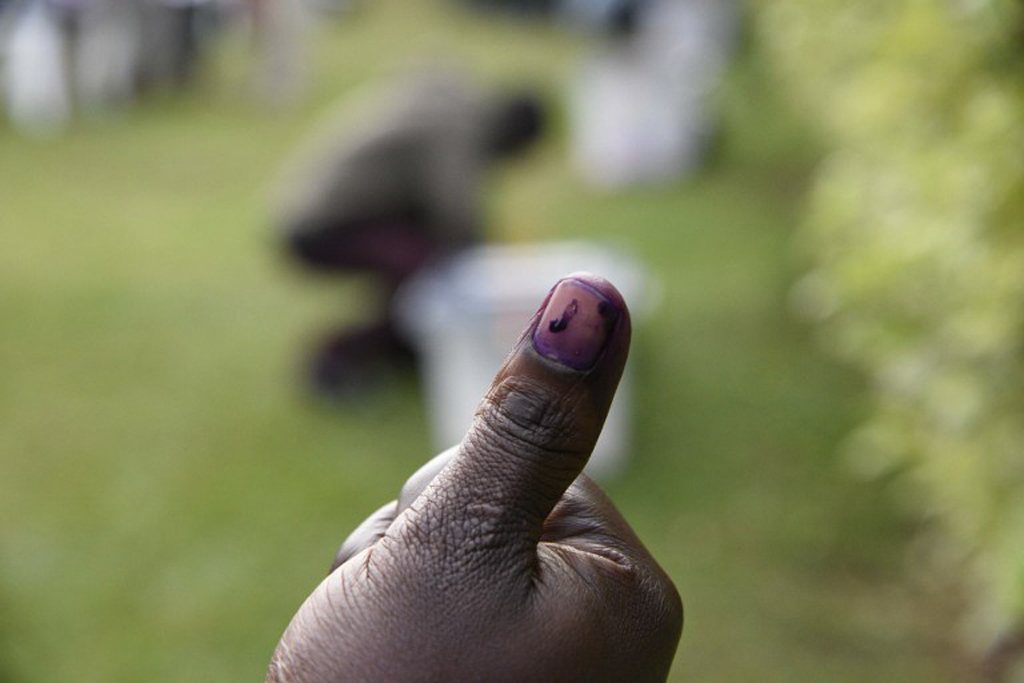 A woman shows her thumb marked with ink, moments after casting her vote in presidential and parliamentary polls, on February 18, 2016 at the Nasuti polling station in Mukono District, some 23 kilometres east of the capital Kampala.

Makarau was speaking to journalists in Harare on the sidelines of a stakeholders meeting on the available voter registration options available for the country.

She said following an outcry by political parties and other stakeholders over the state of the country’s voters’ roll and the manual method that was used to register voters in the country, the ZEC had seen it fit to use the full biometric system which used both facial imagery and finger prints.

“If you remember when we did the 2013 elections, one outstanding issue was about the state of our voters’ roll. So as ZEC, as we prepare for 2018, we are trying to see how we can improve on the integrity of that voters’ roll so that we don’t have the same observations coming up again in 2018.

“Obviously the last option (full biometric) appears to be the best because it eradicates duplication, but it is subject to availability of resources. It is very costly but we want to appeal to funders and government to say allow us to go full biometric because that is the best option available at the moment,” she said.

Makarau said although they were holding consultative meetings with stakeholders, ZEC had the final say on what method they should use as they were an independent body.

“We are presenting the options to the political parties for the first time and we are hoping to get their views on the available options, which one they want to go for but we are entitled to make a decision because we are independent. This is just to find out what the stakeholders also think, but we are going to sit down eventually and make a decision as ZEC,” she said.

She said the ZEC had sent its officers to other African countries such as Cameroon, Tanzania and Zambia to study their models and had also engaged experts with the assistance of the United Nations Development Programme (UNDP).

She said government had an obligation to fund the registration process, adding that funding partners would only come in to assist.

The United Nations Resident Coordinator, Bishow Parajuli, in his opening remarks at the meeting, said the UNDP had started engaging with ZEC since mid-last year and had made incremental steps in a number of areas of capacity building, adding that the UN agency did not have enough resources for the second stage.

He said the UNDP was now counting on other development partners and the government’s commitment to the process.

He said the second stage would see ZEC being supported in the areas of voter registration, voter education and strengthening of further institutional capacity.

“The proposed continued cooperation that has been designed envisages a multi-year partnership that supports capacity building for ZEC, including strengthening voter registration, assistance in developing a robust voter education program and facilitation of effective ZEC engagement with
election stakeholders,” he said.

Parajuli said elections were a political process that required political parties to take full responsibility and mobilise eligible voters to register and vote.

“Even for voter registration to succeed there is a need for mobilisation of the eligible voters by political parties and other stakeholders such as the CSOs. Similarly, the government and its related institutions have the key role to play in providing the necessary support for ZEC to achieve its constitutional mandate,” he said.

He called on stakeholders to consider organising cost-free elections, adding that states should pursue strategies that would eventually make them self-reliant.