Boko Haram goes on a killing spree in Cameroon 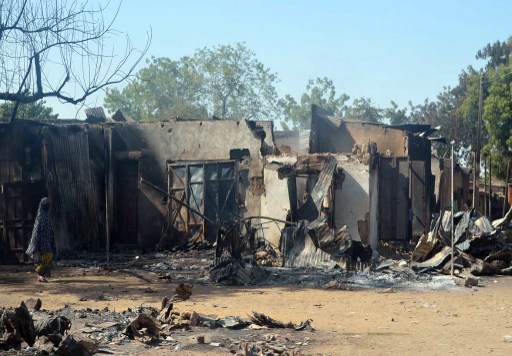 A woman (L) walks past burnt houses after an attack by scores of Boko Haram Islamists in northeast Nigeria.

The figure will definitely rise given the rather large number of wounded people, some of them critically.

Boko Haram descended on Fotokol to revenge the deaths of at least 200 of their members killed by Chadian and Nigerian troops this week.
<blockquote class="twitter-tweet" lang="en"><p>CAMEROON-NIGERIA-UNREST-DEMO-BOKO-HARAM <a href="https://twitter.com/hashtag/Newz?src=hash">Newz</a> <a href="http://t.co/QGXz0EbaeB">http://t.co/QGXz0EbaeB</a></p>&mdash; MidEast Newz Stream (@mideastnewznow) <a href="https://twitter.com/mideastnewznow/status/557935245333258240">January 21, 2015</a></blockquote>
<script async src="//platform.twitter.com/widgets.js" charset="utf-8"></script>
View the video above for more information.
Nigerian and Chadian aircraft have been bombing Boko Haram hideouts since Monday.

About 2,000 Chadian soldiers were stationed along Nigeria-Cameroon this week after the African Union agreed on January 31 to send 7,500 troops to fight Boko Haram.

Boko Haram has killed more than 13,000 people since 2009 in northern Nigeria under the pretext of trying to establish an Islamist state.
In recent months, the group increased attacks on bordering countries, including Cameroon and Chad.
Chad has moved several thousand troops to Cameroon to fight Boko Haram.
The insurgents control about 130 villages and towns in northern Nigeria, a territory the size of Belgium, and have sparked fears of regional instability.
In the video below, the US says the surge in Boko Haram attacks in and surrounding Nigeria may be linked to upcoming elections.
<iframe width="560" height="315" src="https://www.youtube.com/embed/86-kUt0Qky8" frameborder="0" allowfullscreen></iframe>
Click on the video below to take an indepth look at Boko Haram
<iframe width="560" height="315" src="https://www.youtube.com/embed/vzI2m9cI_KA" frameborder="0" allowfullscreen></iframe>