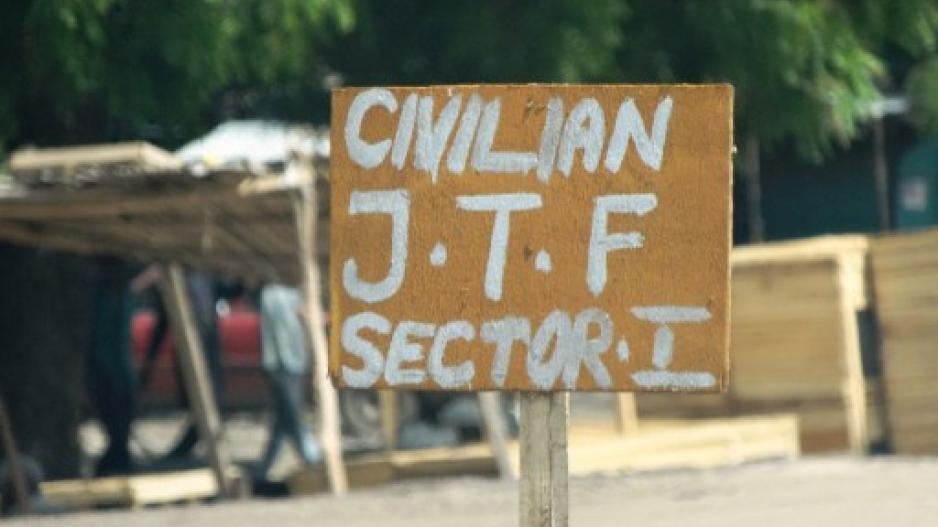 A sign near a checkpoint of a vigilante group reads Civilian Joint Task Force in Maiduguri, where Boko Haram has carried out most of its deadly attacks. Young men and women have in recent weeks a formed vigilante groups, hunting down Boko Haram.

The violence took place on Saturday in Dawashe village, the army lieutenant said in a statement.

He said men from the Civilian Joint Task Force, a vigilante group formed in Boko Haram&39;s bastion Maiduguri to combat the Islamist gunmen who have been terrorising the region for years, entered Dawashe to search for suspects.

Suspected Boko Haram members subsequently opened fire in the village, the spokesman said, adding that the victims were mostly fishermen and traders.

Sani said a dozen other civilians sustained gunshot wounds during the incident but provided no information on casualties among the belligerents.

The toll and circumstances of the incident could not immediately be verified independently.

The MNJTF, a joint military force set up in 1998 to combat border crimes, consists of troops from Nigeria, Chad and Niger.

Its mandate was recently expanded to fight Boko Haram, whose insurgency is estimated to have cost 3,600 lives since 2009, including killings by security forces.

The Cilivian JTF emerged in May after the state of emergency was declared in the region.

It consists of local youths who are generally armed with bows and arrows, machetes, cudgels, and axes but no guns.

The MNJTF has recognised them as an organisation, giving them training and ID cards, and effectively using them as a proxy militia.

The group&39;s knowledge of the terrain and local languages also means it has become a valuable intelligence gathering asset for the government.

JTF troops have been deployed to Mainok and surrounding villages in a bid to arrest the attackers, he said, without giving further details.