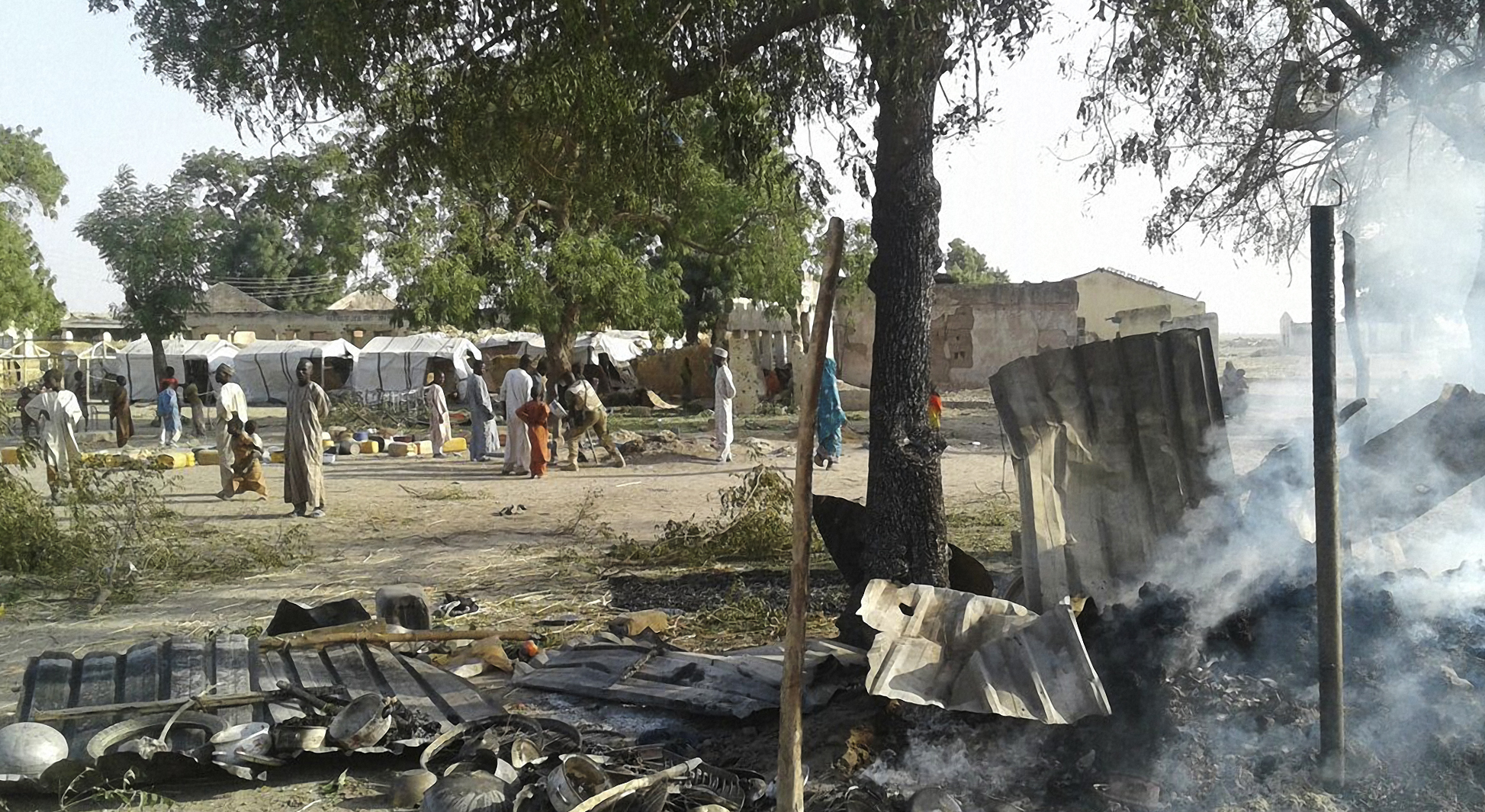 This handout image by Doctors Without Border (MSF) shows people standing next to destruction after an air force jet accidentally bombarded a camp for those displaced by Boko Haram Islamists, in Rann, northeast Nigeria.

The jihadists were dressed in military uniform and arrived in a pick-up in Nigerian army colours at about 6:00 pm (1700 GMT) on Friday, according to the civilian militia assisting troops.

The raid is significant as no civilians were killed or injured.

The Islamic State group last year announced Barnawi was in charge of Boko Haram instead of its long-time leader Abubakar Shekau. Barnawi has criticised Shekau's indiscriminate violence against civilians.

Militia member Mustapha Karimbe, who visited the village on Saturday, said: "The attackers took away food items and medical supplies from shops and a pharmacy but they didn't harm anyone.

"They kept telling residents they were from the Barnawi faction and would not harm anyone as long as no-one got in their way."

A CJTF member in Maiduguri told AFP last week that co-ordinated military action by Nigeria and its neighbours had cut off the Islamist militants' food and fuel supply lines.

Jihadists from both Boko Haram camps have in recent weeks intensified raids on villages and towns in the region in search of food.

The attacks demonstrate the continued threat posed by Boko Haram, despite military claims it was on the verge of defeat.

On Sunday, residents in the town of Magumeri, some 50 kilometres northwest of Maiduguri, said Boko Haram fighters were mobilising in nearby villages.

"The fighters have been mobilising since yesterday (Saturday) and we don't know where they intend to strike," said one local resident, who asked not to be named for fear of reprisals.

"There is so much fear among people in the area because the Boko Haram fighters are definitely up to something," said another.

The apparent build-up comes as Nigeria's military holds a shooting competition in Borno state's Sambisa Forest, which until December last year was the main base of Shekau's faction.

There have been sporadic attacks in and around the Sambisa Forest area against people and traffic.

On March 1, the International Organization for Migration (IOM) said Boko Haram attacks had forced some 7,000 people to flee villages around the town of Chibok in less than a week.

On Saturday, Buratai said the shooting competition would enable Nigerian troops to "continue to dominate the area" as well as hone soldiers' marksmanship skills.