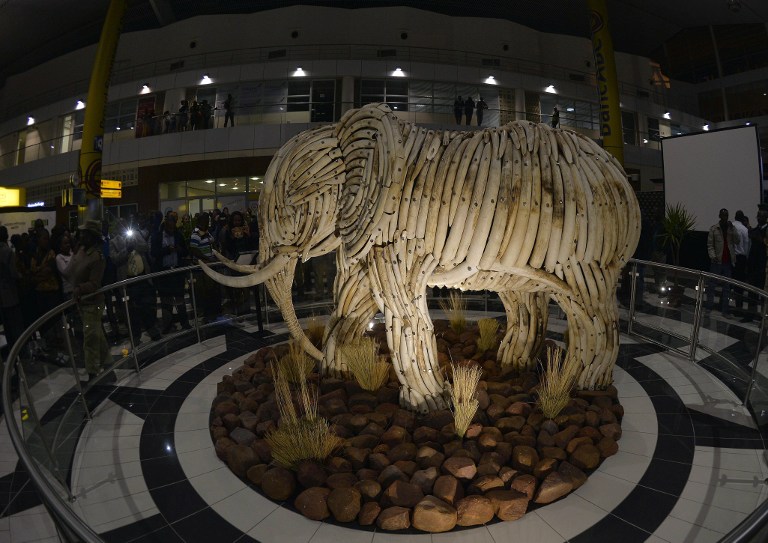 A life-size ivory elephant sculpture at the Sir Seretse Khama International Airport in Gaborone, Botswana on 16 July 2015. The ivory comes from elephants that died naturally.

GABORONE – The government of Botswana says it will attend the Giants Summit for the conservation of elephants in Kenya but will not attend the closing event at which 130 tons of elephant ivory will be torched, as doing so would communicate a misleading message that there was no value in conserving elephants.

Kenya said the burning, which will take place at the end of the Giants Summit in the city of Nanyuki, would send a message to poachers and ivory-trafficking syndicates that the ivory had no value. In a statement released to the media on Tuesday morning, Botswana Minister of Environment, Wildlife and Tourism Tshekedi Khama said the effectiveness of the policy of burning ivory stockpiles was a matter for individual elephant range states to decide.

“Since 1989, some African countries have destroyed about 150 tons of ivory. Seventeen countries have carried out 25 ivory destruction events. Despite this the reality is that 20,000 elephants are still being killed annually for their ivory.

"In Botswana, we do not to destroy ivory because we have told communities living with the elephants that there is value in conserving them for ecotourism and emphasised that the value of a live elephant should be upheld at all costs.

“Burning ivory would demonstrate to the communities that the animal has no value. As Botswana, we prefer to not burn ivory or rhino horn or any other wildlife product that can be used to demonstrate to the wider world the value of nature and the importance of conservation.

“Botswana has a strong reputation for conservation as home to Africa’s largest elephant population, we are committed to maintaining this status and looking at new ways to preserve our commitment to elephants,” Khama said.

“It is critical that we develop strong symbolic messages and strengthen efforts to save Africa’s elephants on all levels, starting locally with the communities that coexist with elephants to globally with the countries where demand for ivory is highest. Botswana’s accomplishment stems from political will brought about through transparency coupled with successful programmes within communities and zero tolerance towards poaching and sustainable management of natural resources.

“Botswana will attend the Giant’s Club Summit in Nanyuki, Kenya, at the end of the month to represent its commitment to finding lasting solutions to ensuring the longevity and sustainability of Africa’s wild elephant population. For us, burning ivory is like putting the final nail in the coffin of a once magnificent animal by destroying its remaining tusks. We cannot burn the shame associated with this and hope it will disappear in smoke. Therefore we will not attend the ivory burning event after the summit,” Khama said.