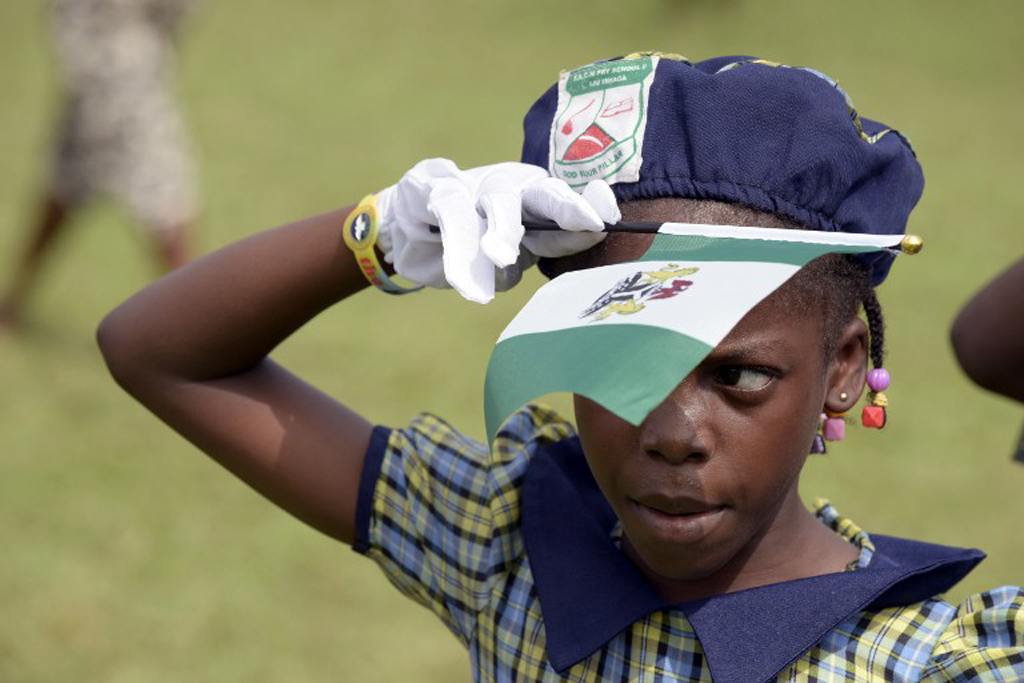 A pupil salutes as she holds a green and white Nigerian flag on October 1, 2015 as part of Nigeria's independence anniversary celebrations, in Lagos.

LAGOS - President Muhammadu Buhari said on Thursday he had submitted a cabinet list to parliament for approval but asked Nigerians to be patient with his four-month search for a government to tackle the country&39;s worst economic crisis for decades.

Foreign investors and Nigerian firms have criticised Buhari, a 72-year old former military ruler, for waiting until late September to nominate cabinet members when Africa&39;s largest economy is taking a hammering from a plunge in oil revenues.

Companies have laid off thousands of staff because the central bank has limited access to dollars for imports to prevent a currency collapse, filling a vacuum in the absence of a finance minister. Many public servants have not been paid for months as oil revenues make up 70 percent of government income.

"Impatience is not a virtue," Buhari, who took office on May 29, said in a televised speech on Independence Day. "The first set of names for ministerial nominees has been sent to the Senate. Subsequent lists will be forwarded in due course."

A vendor carries Nigerian national flags on October 1, 2015 as part of Nigeria&39;s independence anniversary celebrations, in Lagos.Buhari, who told Reuters on Tuesday he would keep the key oil ministry, gave no names or time frame after promising earlier Africa&39;s most populous nation would have a government in place by Sept. 30. "Careful and deliberate decisions after consultations get far better results," he said.

Political sources said that some of the names thought to be on the cabinet list included former Lagos state governor Babatunde Fashola and the head of the state oil firm NNPC, Emmanuel Kachikwu.

Other names circulating include the erstwhile governor of oil-rich Rivers state Rotimi Amaechi, who was among the first to defect from the People&39;s Democratic Party of Buhari&39;s predecessor Jonathan Goodluck to the current president&39;s All Progressives Congress.

Buhari has vowed to clean up politics in a country where only a hyper-rich elite has benefited from its massive energy wealth. Around half of the 170 million Nigerians live in poverty, according to the World Bank.

But some anti-graft measures have backfired as liquidity on the interbank market dried up after banks were ordered to move government revenue to a single account at the central bank.

The army, backed up by a regional task force, has managed to regain northern territories from the Islamist Boko Haram which has killed thousands of people and displaced 1.5 million in a six-year-old insurgency. But the group still killed around 900 people since Buhari took over.

In his brief speech, Buhari mainly repeated his election pledge to bring change to Nigeria without offering an action plan to tackle the economic crisis.

He reiterated he was restructuring the mismanaged oil firm NNPC and conducting audits of key state institutions such as the central bank, customs and tax authorities as part of the anti-graft campaign.

A detachment of police march on October 1, 2015 as part of Nigeria&39;s independence anniversary celebrations, in Lagos.

"Prudent housekeeping is needed now more than ever in view of the sharp decline in world market oil prices," he said. "It is a challenge we have to face squarely."

When Buhari seized power in 1983 he deployed soldiers with whips to ensure orderly queues at bus stops before getting ousted by another general 18 months later without achieving much.

Now he told his countrymen: "We must change our unruly behaviour in schools, hospitals, market places, motor parks, on the roads, in homes and offices."

Senate President Bukola Saraki will read the cabinet list, which was currently sealed in an envelope, to the upper house of parliament on Tuesday, the Senate said in a statement.