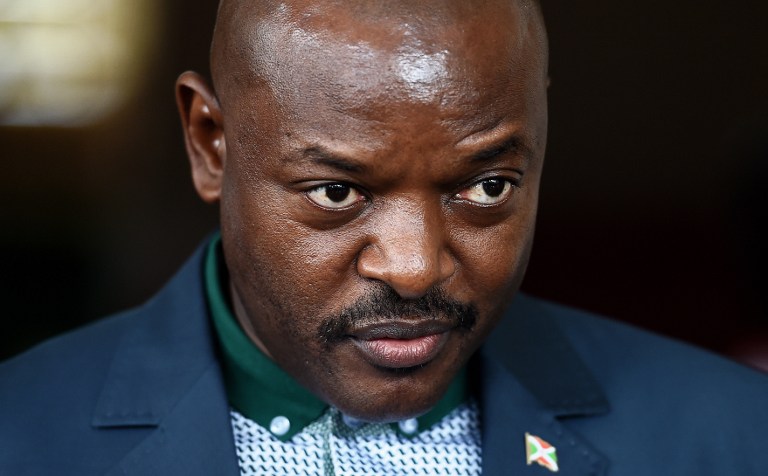 Burundi's President Pierre Nkurunziza stands at the President's office in Bujumbura on May 17, 2015.

NAIROBI – Burundian President Pierre Nkurunziza was sworn in for a controversial third term in power on Thursday, the presidency said, following elections last month, weeks of protests and a failed coup.

Nkurunziza took the "oath for a new term of five years", the presidency said in a statement, in a surprise ceremony on Thursday, announced only a few hours in advance.

His third term has been condemned as unconstitutional by the opposition and provoked months of protests. There have been a string of killings since his re-election, including of a top general, killed in a rocket attack last month.

No foreign head of state was present, and only South Africa was represented at ministerial level.

Several African countries, as well as China and Russia, sent their ambassadors.

The ambassadors of EU nations and the US did not attend, but were represented by lower ranking officials.

The UN observer mission said the vote last month was not "inclusive free and credible" and was held "in an environment of profound mistrust" between political rivals.

Nkurunziza won 69.41 percent of the vote, an immediate first round victory.

Burundi&39;s constitution only allows a president to be elected twice – for a total of 10 years in power – but before these polls Nkurunziza argued he had only been directly elected by the people once.

Nkurunziza, a 51-year-old former sports teacher and born-again Christian, was a Hutu rebel leader during the central African country&39;s 13-year civil war, when at least 300,000 people were killed.

The opposition and international community claimed a third term violated the Arusha Accords that had brought that conflict, which raged between 1993 and 2006, to an end.