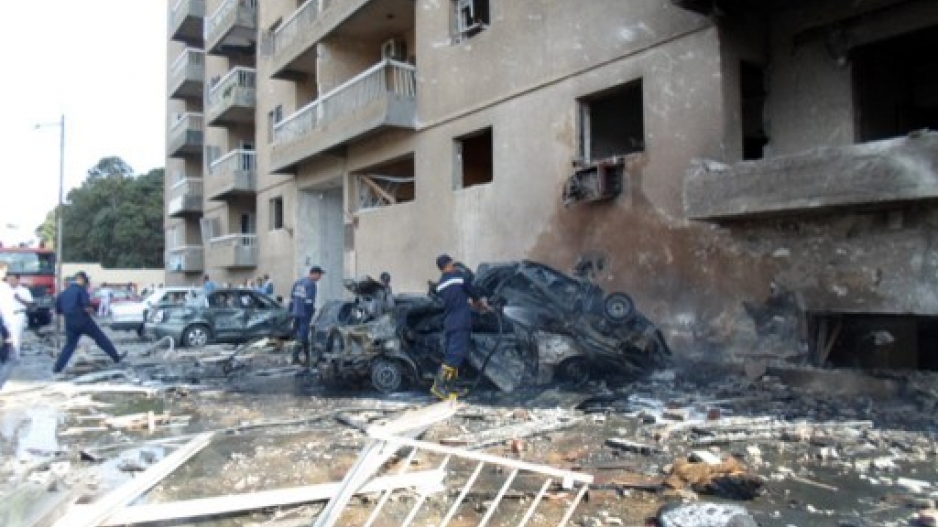 An Egyptian firefighter sprays water towards burnt vehicles after a car bomb attack outside a military intelligence building that wounded four people.

CAIRO - Jihadists have released a video of a suicide bombing in which an ex-army major reveals himself as the attacker who tried to kill Egypt&39;s interior minister in September.

A senior interior ministry official confirmed the bomber, Walid Badr, was a major in the military before his expulsion in 2005 for "extremist" views.

In the video posted on YouTube on Saturday by the Sinai-based Ansar Beit Al-Maqdis, Badr can be seen explaining his motives before detonating a car bomb close to a convoy carrying Interior Minister Mohammed Ibrahim.

The revelation of Badr&39;s army past comes at a time of heightened conflict between Islamists and the military, which overthrew Islamist president Mohamed Morsi in July after mass protests demanding his resignation.

More than 1,000 people, mostly Islamists, have been killed and 2,000 arrested in an ensuing crackdown.

The Al-Qaeda-inspired group had previously claimed responsibility for the September 5 attack outside Ibrahim&39;s home, which killed one person but did not harm the minister, who was travelling in an armoured car.

The attack was seen as a precedent by Sinai militant groups that had previously limited their operations to the restive peninsula.

The army has sent tanks and aircraft to north Sinai to battle Islamist militants who have killed more than 100 policemen and soldiers since Morsi&39;s overthrow in July.

"The Egyptian military has declared war on our religion," said Badr in the video, in uniform and reading from a prepared speech.

In the 31-minute video, Badr lambasts Morsi&39;s Muslim Brotherhood and other Islamist political groups for taking part in the "farce of democratic Islam."

He chides Morsi&39;s supporters for not responding to the president&39;s ouster with armed attacks.

Army chief Abdel Fattah Al-Sisi "had thought you would avenge your religion, so he beefed up army and police units in anticipation of your reaction," Badr said.

"Instead all he got was slogans and screams and bare chests, making you easy prey," said Badr of the Islamists&39; mainly peaceful protests.

"Why do you shy away from armed confrontation," he asked.

In the video, Badr is introduced as an ex-army major who left the military to fight in Afghanistan and Syria, and spent a year in detention in Iran.

Several Egyptian military officers are known to have joined jihadist groups in the past.

President Anwar Sadat&39;s assassin in 1981 was an army officer, and a top Al-Qaeda military commander known as Seif al-Adel was also in the armed forces.

Abdel Latif said Badr returned to Egypt under Morsi, blamed for pardoning convicted militants or allowing them to return to the country during his turbulent one-year rule.

Many Islamists convicted on terror charges were released after finishing their sentences following the ouster of veteran president Hosni Mubarak in early 2011.

The releases took place during the interim military rule that followed Mubarak&39;s ouster and during Morsi&39;s term in office.