Call for Ethiopian protests to continue on Sunday 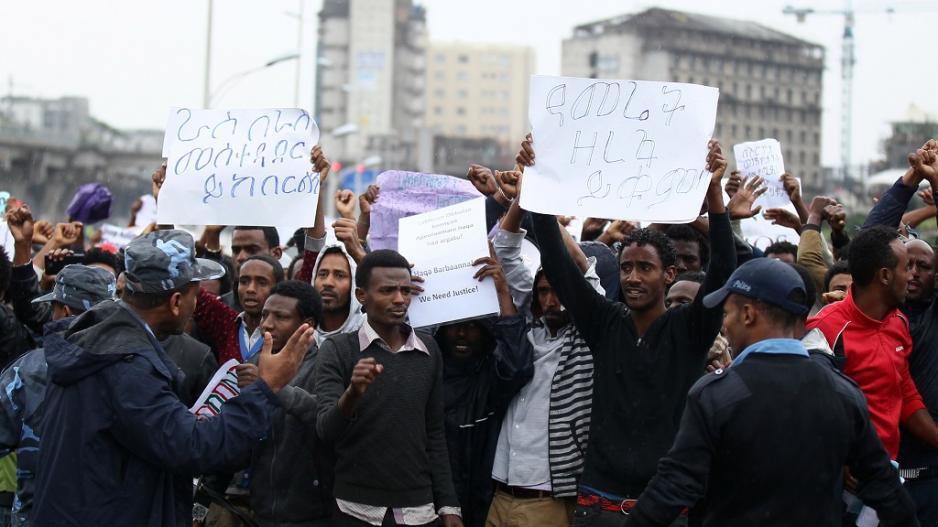 ADDIS ABABA - There was also a call for a rally on Sunday in Ethiopia&39;s Baher Dar in the Amhara region.

At least seven people were killed during fresh clashes between police and anti-government protesters in western Ethiopia on Saturday, local sources said, while the ethnic unrest also reached the capital Addis Ababa for the first time.

Saturday&39;s Addis rally was significant in that it was the first of its kind in the capital.

Local people also told AFP there had been further rallies and clashes with police in the Oromo city of Ambo.

Saturday&39;s rally in the capital was called by opposition groups from the Oromo, Ethiopia&39;s main ethnic group.

Some 500 people gathered amid a heavy police presence on the capital&39;s main Meskel Square shouting slogans such as "we want our freedom" and "free our political prisoners."

Police swiftly moved in to break up the protest.

OromoProtests a footage that shows police brutality in the capital city of Ethiopia pic.twitter.com/DaUEeFX3XH

The other main ethnic group, the Amhara, has also held rallies in recent weeks.

Both groups, which between them make up some 80 percent of the population, complain that they suffer discrimination in favour of ethnic Tigrayans, who they say occupy the key jobs in the government and security forces.

Sources in western Ethiopia said that at least seven people were killed during the clashes in Nemekte, in the Oromo region Saturday, though no details emerged.

In Addis Ababa, police made dozens of arrests during the anti-government demonstration which came less than a week after thousands of people from the Amhara group joined a demonstration in the northern city of Gondar.

"This is a mass movement of civil disobedience which is not organized by political parties," Merera Gudina, chairman of the Oromo People&39;s Congress group told AFP.

"People are totally fed up with this regime and expressing their anger everywhere".

Prime Minister Haile Mariam Dessalegn had Friday announced a ban on demonstrations which "threaten national unity" and called on police to use all means at their disposal to prevent them.

Authorities have blocked access to social media, the activists&39; key channel for such rallying calls, since Friday.

Deaths and detentions in Ethiopia as protests flare https://t.co/1bCy1S6dJv via @HornDiplomat

Before news of Saturday&39;s fatalities came in, Ethiopian authorities said at least a dozen people had been killed in clashes with police over territorial disputes in recent weeks.