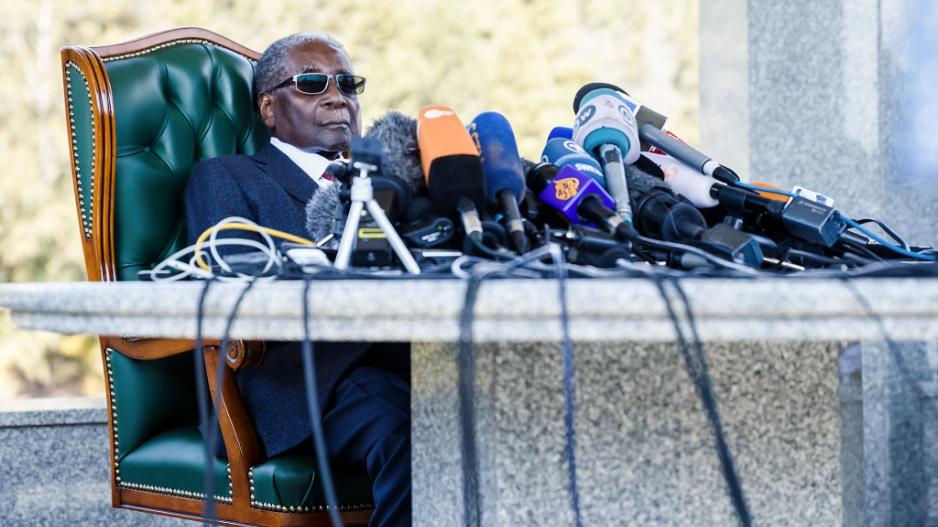 Former Zimbabwe President Robert Mugabe addresses media on July 29, 2018 during a surprise press conference at his residence "Blue Roof " in Harare on the eve of the country's first election since he was ousted from office last year.

HARARE - Former Zimbabwe president Robert Mugabe, who was ousted by the military in November, made a surprise intervention Sunday on the eve of key elections, calling for voters to throw his former party out of office.

In his first live appearance since being forced to resign by his generals, Mugabe, 94, spoke slowly but appeared in good health sitting in a pagoda in the grounds of "Blue Roof", his sprawling mansion in Harare.

"I hope the choice or the voting which will be done tomorrow... will thrust away the military form of government and bring us back to constitutionality," he said.

In the country&39;s first election since Mugabe was ousted after 37 years in power, Zimbabwe goes to the polls Monday amid mounting allegations of voter fraud and predictions of a disputed result.

Zimbabwe&39;s generals shocked the world last year when they seized control and ushered Mnangagwa to power after Mugabe allegedly tried to position his wife Grace, 53, to be his successor.

"I cannot vote for those who tormented me," Mugabe said, hinting he could vote for MDC. "I can&39;t vote for ZANU-PF... what is left? I think it is just Chamisa."

"It was a thorough coup d&39;etat," Mugabe said, adding it was "utter nonsense" that he wanted Grace as his successor.

Grace posed for photographs beside her husband after his two-hour press conference.

Mnangagwa, 75, who promises a fresh start for the country despite being from the ZANU-PF elite, is the front-runner with the advantage of covert military support, a loyal state media and a ruling party that controls government resources.

But Chamisa, 40, who has performed strongly on the campaign trail, hopes to tap into a young population that could vote for change.

ZANU-PF, which was previously fiercely loyal to Mugabe, has ruled since the country&39;s independence from British colonial rule in 1980.

"If Mugabe is able to go to my inauguration that is good news," Chamisa said in response to Mugabe&39;s remarks.

"I have nothing to do with what president Mugabe would want to say as a voter."

Elections during Mugabe&39;s authoritarian rule were often marred by fraud and violence, and this year&39;s campaign has been dominated by accusations that the vote would also be rigged.

Campaigning has been relatively unrestricted and peaceful compared with previous elections, and some analysts point to pressure for the vote to be judged credible to draw a line under the international isolation of the Mugabe era.

Polling in Zimbabwe is uncertain, but a recent Afrobarometer survey of 2,400 people put Mnangagwa on 40 percent and Chamisa on 37 percent, with 20 percent undecided.

Mnangagwa, who is accused of involvement in election violence and fraud under Mugabe, has vowed to hold a fair vote and invited in international observers -- including the previously-banned European Union team.

"What is left now is only one push on Monday to vote -- to vote for ZANU-PF so we have a thunderous victory," Mnangagwa told his supporters who filled about half of the 60,000-capacity national stadium at his final rally on Saturday.

"Today we unlock the potential of our beloved homeland to build a new Zimbabwe for all," he said, repeating his promise of economic revival.

Despite accusing Mnangagwa and the Zimbabwe Electoral Commission (ZEC) of trying to fix the result, Chamisa has vowed not to boycott the vote, saying his party would still win.

With 5.6 million registered voters, the results of the presidential, parliamentary and local elections are due by August 4.

A presidential run-off vote is scheduled for September 8 if no candidate wins at least 50 percent in the first round.

Mugabe: the day of the Lord. I am sure the good Lord will help us to bring about a better day for Zimbabwe tomorrow @eNCA ZimElections2018 ZimDecides2018

Mugabe explains how he wont vote for Zanu PF or two women candidates "what else is there, it is just Chamisa" @eNCA ZimElections2018 ZimDecides2018