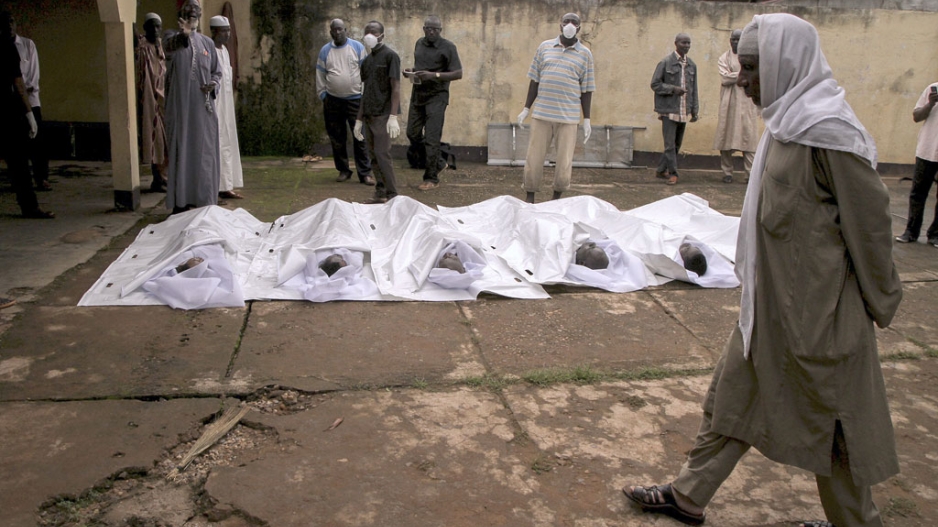 Corpses lie on the ground at Ali Babolo mosque in Bangui on June 21, 2016. Sixteen people have been killed in two days of clashes between Fulani herdsmen and the mainly Muslim Seleka militia in the Central African Republic.

BANGUI – The latest clashes between rival armed groups in the Central African Republic have left 85 dead, a government official said Monday, in what the UN warns is a worsening situation.

"This figure is confirmed," said presidential spokesman Albert Mopkem, referring to a toll provided by Adama Dieng, a UN special envoy for the prevention of genocide.

Nearly half the population needs humanitarian assistance, according to the United Nations which has appealed for $399 million from donors to cover the country's aid needs next year.

The latest deaths in the town of Bria, 400 kilometres (250 miles) northeast of Bangui, were amplified by 76 wounded and nearly 11,000 people being displaced in battles between factions of the former "Seleka" Muslim rebel group last week, Dieng said.

The Central African Republic is struggling to emerge from a civil war which erupted in 2013 following the overthrow of former president Francois Bozize, a Christian, by a Seleka coalition.

The government is trying to bring together 14 armed groups under a disarmament deal in the former French colony. But militias have flourished in the power vacuum left by a weak state.

Fighting is taking place between the Popular Front for the Renaissance of the Central African Republic (FPRC) and the Union for Peace in Central Africa (UPC).

The two factions are fighting for control of taxes levied on Fulani herders during the current seasonal migration.

Condemning the latest violence, Dieng's statement warned of "the risk that it could result in reprisal attacks and rapidly escalate".