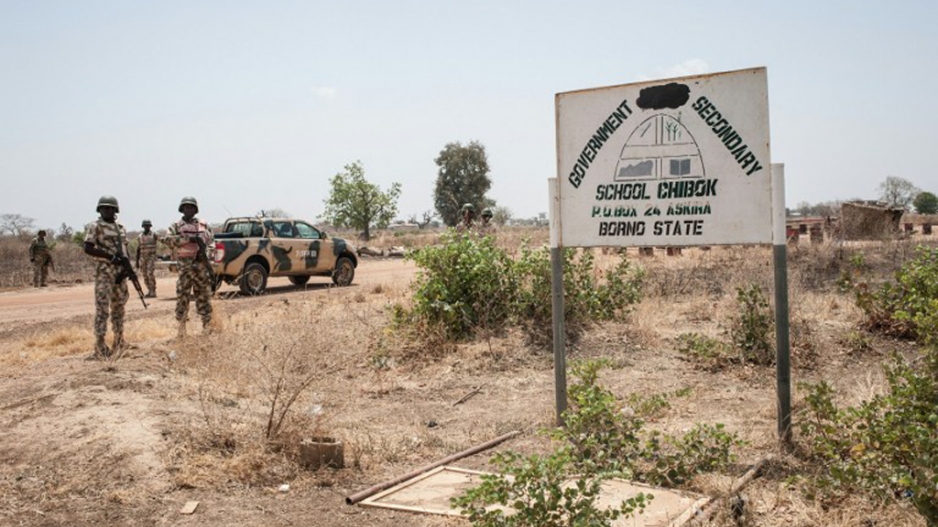 Soldiers from the 7th Division of the Nigerian Army stand outside the Government Girls Secondary School Chibok in Borno State north-eastern Nigeria on 25 March, 2016.

CHIBOK - There&39;s not much left of the Government Girls Secondary School in Chibok, northeast Nigeria, where Boko Haram kidnapped 276 teenagers in the dead of night nearly two years ago.

Even the word "girls" on the school sign outside has been painted over in black -- hidden from the world, just like the 219 students who are still missing.

Up the dusty track and beyond the heavy wrought-iron gates, soldiers stand guard with assault rifles, although there are few buildings and no people to protect.

The government of Nigeria&39;s former president Goodluck Jonathan announced shortly before last year&39;s election that rebuilding work had begun at the school.

But apart from piles of breeze blocks, there&39;s no evidence of any construction. The sprawling site is silent apart from the sound of cicadas and gusts of hot wind through the desert scrub.

Ayuba Alamson Chibok steps through the rubble where the girls&39; dormitories once stood, picking up a bed frame from the scorched earth -- one of the few signs the site was once inhabited.

"If the government wanted to do something, let them call the contractor... to put somebody on the ground," the town elder told AFP, his voice rising in anger.

"Education here in Chibok has really come to zero level. This is the only school we have in Chibok and it has been destroyed."

The second anniversary of the mass kidnapping on April 14 will bring renewed attention to the remote town in southern Borno state, which was little known until two years ago but is now synonomous with the brutal conflict.

Parents of the abducted girls plan to gather at the school on the day itself to pray for their safe return, said Yakubu Nkeki, from a support group helping those left behind.

But 16 fathers and two mothers will not be there, he said. They have either died or are now among the estimated 20,000 killed in the nearly seven-year Islamist insurgency.

Others live with the physical and psychological effects of the disappearances. High blood pressure and stomach ulcers are common, he said.

Members of the "Bring Back Our Girls" movement, holding a banner showing photographs of some of the missing, march to press for the release of the schoolgirls kidnapped in 2014 from their school in Chibok by Islamist group Boko Haram. Credit: STRINGER / AFP

Yet despite the global outrage online at the kidnapping and promises of action, many people in Chibok say they feel abandoned.

"Nothing has been done," said Nkeki, a primary school teacher, questioning why nearby towns recently liberated from Boko Haram have since been able to re-open schools.

The Government Girls Secondary School was the only state-run school in Chibok but it has been shut since the kidnapping. Calls for a boys school have come to nothing, he said.

"Really, Boko Haram has achieved its aim by saying they don&39;t want Western education," he added.

In the town, life goes on as best it can. Upturned bicycles are repaired in the street, hawkers trade groundnuts from see-through plastic buckets and boys push wheelbarrows full of tart oranges.

The single main street, like the dirt road in to and out of the town, is unpaved. Every vehicle kicks up choking dust. Electricity cables hang to the ground from damaged poles.

In January, three suicide bombers killed 13 people in Chibok. At the mosque, worshippers, including young children, are now screened outside for explosives.

Vigilantes assisting the military stand guard with single-shot, home-made muskets in a town that has been largely inaccessible because of insecurity.

"We have hardship," admitted Buluma Dawa, a 56-year-old bookseller. "There is no light, no water, no road and security-wise it&39;s not enough for us in Chibok."

Dawa and others are at a loss to explain why, suggesting the state government has no interest in developing rural areas.

"We hope that on the two years&39; anniversary (of the kidnapping), we pray that people will remember Chibok because... nothing is improving at all...

"We have a lot of children living at home without doing anything... They will suffer, there is nothing else.

"If there is no education the poor people cannot even achieve."

Some of the missing schoolgirls&39; parents can be found in Mbalala, a 10-minute drive from Chibok through an area still known for Boko Haram activity.

There&39;s little movement in the market place, only the sound of children playing, the bleating of goats and an imam&39;s sermon over the loudspeakers of the mosque.

Young girls in blue and white hijabs sit on piles of mud bricks; boys wash a goat tethered to a pole while others fetch water from a well, pouring it into plastic buckets.

Yawale Dunya is among the men sitting mostly silently on benches in the shade of cracked mud-brick houses or cross-legged playing cards.

The 41-year-old farmer has been able to do little else since his 15-year-old daughter Hawa was abducted. His fingers pick distractedly at prayer beads.

Military successes against the insurgents have kept his hopes alive of Hawa&39;s return and he runs through the scenario repeatedly in his head.

"When I see my daughter coming back to me I will feel very much joy in my heart," he said.

"All the small sickness and other things will disappear and I will be very happy in my life."