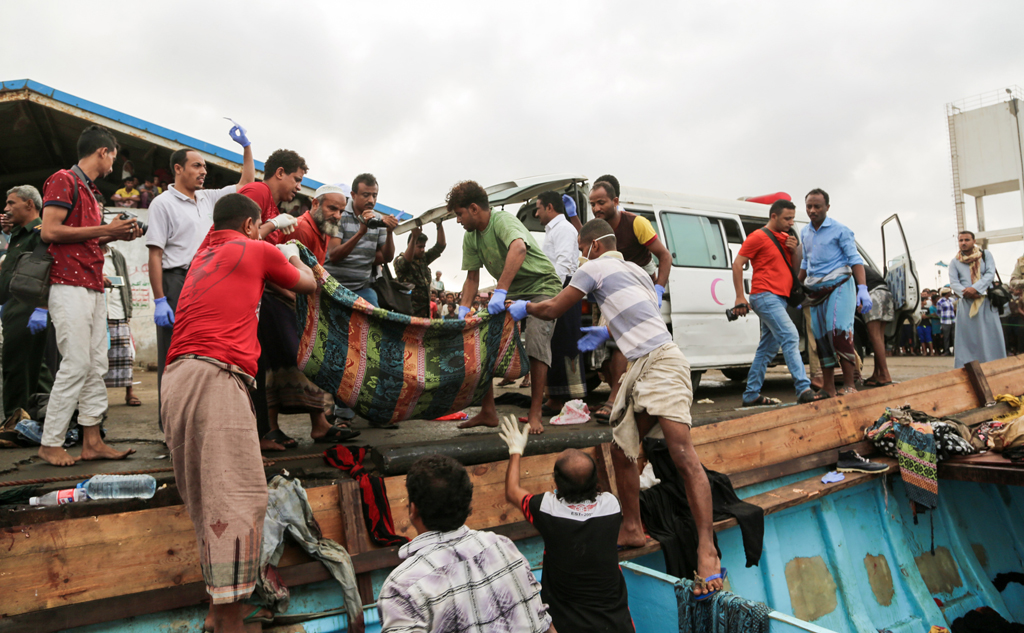 A picture taken on March 17, 2017, shows bodies of people who were killed in a boat carrying Somali refugees arriving in the rebel-held Yemeni port city of Hodeida.

ADEN - Dozens of Somali refugees including women and children have been shot dead aboard a boat on the Red Sea, Yemeni officials and the International Organization for Migration said Friday.

The bodies of 33 refugees were taken to hospitals in Yemen's rebel-held port of Hodeida, a health official in the city said, adding that 35 wounded had also been admitted.

The circumstances of the attack were not immediately clear, but a port official in Hodeida, held by Shiite Huthi rebels, said the craft had docked and the dead and injured had been hit with light weapons fire, likely ruling out an attack from the air.

The IOM said that 80 survivors were rescued and taken to hospital including 24 in "extremely critical" condition.

"Our confirmation is that there are dozens of deaths," said spokesman Joel Millman.

The Apache helicopter attacked the boat carrying Somali #refugees with #UNHCR documents while on their way from #Yemen to #Sudan, 33 killed pic.twitter.com/hRokWxHbbo

The port official said dozens of other Somalis who survived the attack, as well as three Yemeni traffickers, had been taken to the city's prison.

The rebel-controlled Saba agency said the refugees had been attacked from the air by the Saudi-led coalition battling the insurgents, but did not provide further details.

Despite a war that has cost more than 7,000 lives since March 2015 and brought Yemen to the brink of famine, the country continues to attract people fleeing the horn of Africa.

Several refugee camps in southern Yemen are hosting Somali refugees, although not in the Hodeida area.

The coast south of Hodeida has seen violent clashes over the past 24 hours, leaving 32 dead including 10 civilians, according to military and medical officials.

PICTURED: A temporary registration form for refugees with the UNHCR is seen covered in blood. It belonged to one of the persons killed in a boat carrying Somali refugees to the rebel-held Yemeni port city of Hodeida. CREDIT: STR / AFP

That came as pro-Hadi forces sought to advance northwards from the port town of Mokha in an offensive to retake Yemen's western coast from Huthi forces.

Saudi-led coalition aircraft had taken part in the assault, the same sources said.

Seven fishermen were also killed off Hodeida by gunfire from an unidentified source, while a further seven were killed in a car near Mokha, hospital workers said.

The UN's humanitarian chief Stephen O'Brien has called Yemen "the largest humanitarian crisis in the world," with two-thirds of the population in need of aid.