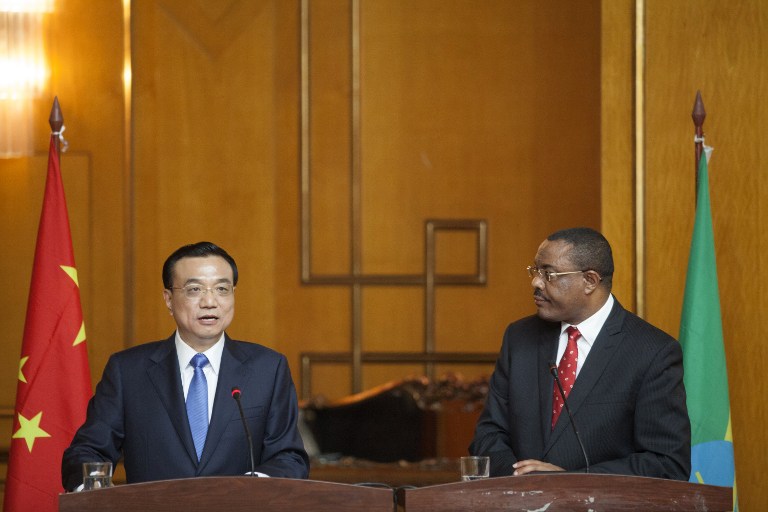 Chinese Prime Minister Li Keqiang (L) and his Ethiopian counterpart Hailemariam Desalegn (R) deliver a joint press statement during a treaty signing ceremony at the presidential palace in Addis Ababa on May 4, 2014.

ADDIS ABABA - China&39;s prime minister arrived on Sunday in Ethiopia for a four-country tour of Africa, calling for deeper ties with his country and seeking to recast a relationship that has admittedly faced difficulties.

"China and Africa&39;s destiny is closely linked. We supported each other during the struggle for independence. And in the course of national development, we have always treated each other as equals," Li said in the capital, Addis Ababa.

"We have forged a relationship of mutual learning in our civilizations and cultures. We have respected each other&39;s choices in the path of development according to our national conditions, and we are learning from each other," he said.

"For these reasons, we need to deepen our ties in pursuit of common development," Li added.

Before leaving China, Li urged Chinese companies to strictly abide by local laws and regulations, hold themselves accountable for the quality of their projects and goods and to consumers, and "shoulder due responsibility" for local communities and the environment, said a news release quoted by the official Xinhua News Agency.

Last year, China-Africa trade reached $210 billion, with more than 2,500 Chinese companies operating on the continent, according to Xinhua.

However, tensions exist around allegations of shoddy construction and a lack of respect for employment and other local laws. China has also faced allegations that its pervasive influence has more than a whiff of colonialism about it.

"I wish to assure our African friends in all seriousness that China will never pursue a colonialist path like some countries did or allow colonialism, which belonged to the past, to reappear in Africa," Li said before departing. He said companies have encountered "growing pains" and the Chinese government takes such issues seriously.

He said problems in the relationship were "isolated cases."

In 2010, two Chinese managers there were accused of shooting miners during a labor dispute, and later clashes reportedly saw one Chinese worker killed and two others injured.

Li also urged African countries to protect the lawful rights and interests of Chinese companies and the safety of their employees. China has come under increasing pressure from its citizens to protect their rights abroad.

The weeklong trip by Li and his wife Cheng Hong includes stops in Nigeria, Angola and Kenya, marking the first time the premier has visited Africa since taking office last year.

Li will visit African Union headquarters in Addis Ababa and attend the World Economic Forum on Africa, held in Nigeria.