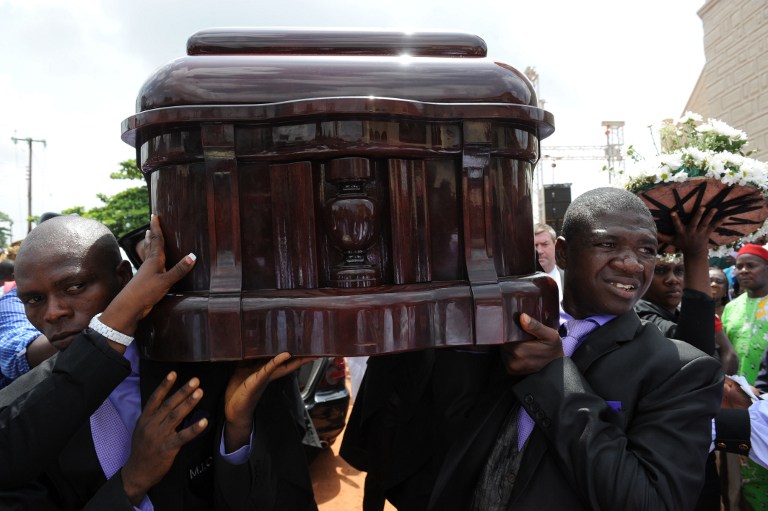 The casket containing the body of late author Professor Chinua Achebe is carried t St. Phillips Anglican Church for the funeral service at Ogidi in southeast Nigeria on May 23, 2013.

On Thursday, however, the lawmakers and the country&39;s elite came to praise him.

Hundreds attended Achebe&39;s funeral among the rolling hills of his eastern Nigeria home, a service that saw President Goodluck Jonathan literally hold up the writer&39;s books.

The gold plaque on his coffin simply called him the "eagle atop the Iroko tree" in his native Igbo language.

It was a fitting tribute to the respect Achebe carried among the people here and for many others around the world who knew him through his books, which many say is the first African voice heard in modern literature.

Achebe rose to acclaim with the publication of his 1958 classic novel "Things Fall Apart," a parable for the collapse of traditional society in Africa on the arrival of colonialists.

"Things Fall Apart" has sold more than eight million copies worldwide and has been translated into more than 50 languages.

Though describing himself in writing as a "British-protected child," Achebe became a forceful critic of Western literature about Africa, especially Joseph Conrad&39;s "Heart of Darkness."

His writings often focused on that split between cultures, serving at times as a bridge for those wanting to understand the those two worlds.

Achebe died in March at the age of 82 in Boston after an illness.

Though a 1990 car crash left him paralysed from the waist down, he continued writing and taught at universities in the United States, earning him the nickname "Prof" throughout Nigeria.

Achebe also could be just as harsh of a critic of Nigeria.

When the Igbo lands of the east broke away from Nigeria to become the nation of Biafra, Achebe served as a roaming ambassador for the new nation.

However, the war saw one million people killed, many through starvation in the waning days of the conflict. His friend, the poet Christopher Okigbo, also died but his family survived bombings and the war&39;s horrors.

"As we reached the brink of full-blown war it became clear to me that the chaos enveloping all of us in Nigeria was due to the incompetence of the Nigerian ruling class," Achebe wrote in his recent civil war memoir, "There Was a Country: A Personal History of Biafra."

"This clique, stunted by ineptitude, distracted by power games and the pursuit of material comforts, was unwilling, if not incapable, of saving our fledging new nation."

Achebe later twice refused Nigeria&39;s second-highest award, the Commander of the Order of the Federal Republic, over the lawlessness in his home state of Anambra.

A spokesman for President Jonathan later said Achebe&39;s decision to reject the honour "clearly flies in the face of the reality of Nigeria&39;s current political situation."

However, the problems raised in Achebe&39;s polemic 1980s essay "The Trouble With Nigeria" ring true even today in this oil-rich nation beset by extremist violence, rampant poverty and poor governance.

Thursday, even Jonathan held up that essay before mourners at St. Phillip&39;s Anglican Church, which sits just next to the primary school Achebe attended as a child in Ogidi.

The crowd loudly shouted back: "No!"

Yet Jonathan himself, toward the end of his 12-minute speech, referred to the 2011 elections that cemented him in power as a "significant improvement," without mentioning the 800 people killed in religious rioting and political violence afterward, nor the allegations of vote rigging.

Many expect Jonathan to run for re-election in 2015 and some see his appearance at burials for Igbo leaders as an attempt to sway voters in a crucial powerbase.

Ghanaian President John Mahama also attended the service alongside Jonathan, as well as other politicians and leaders.

In a scene reminiscent of Achebe&39;s own complaints, the elite rushed out of the service and into tinted-glass SUVs. In the wake of their sirens, soldiers and police officers carrying automatic weapons pushed and fought with the surging crowds.

Others scuffled over programmes in the back of the church during the service.

Everyone, including Jonathan, however, waited for Achebe&39;s body to be first carried out of the church.

Pallbearers later entombed the writer&39;s casket in a mausoleum next to his home, as traditional dancers and others gathered.

Outside, hawkers continued to sell Achebe&39;s books, a sign that the writer&39;s influence will continue long after these ceremonies come to an end.

Said Ikechi Nwachukwu Nwosu, the Anglican archbishop who eulogised Achebe: "There are some people who cannot be buried."