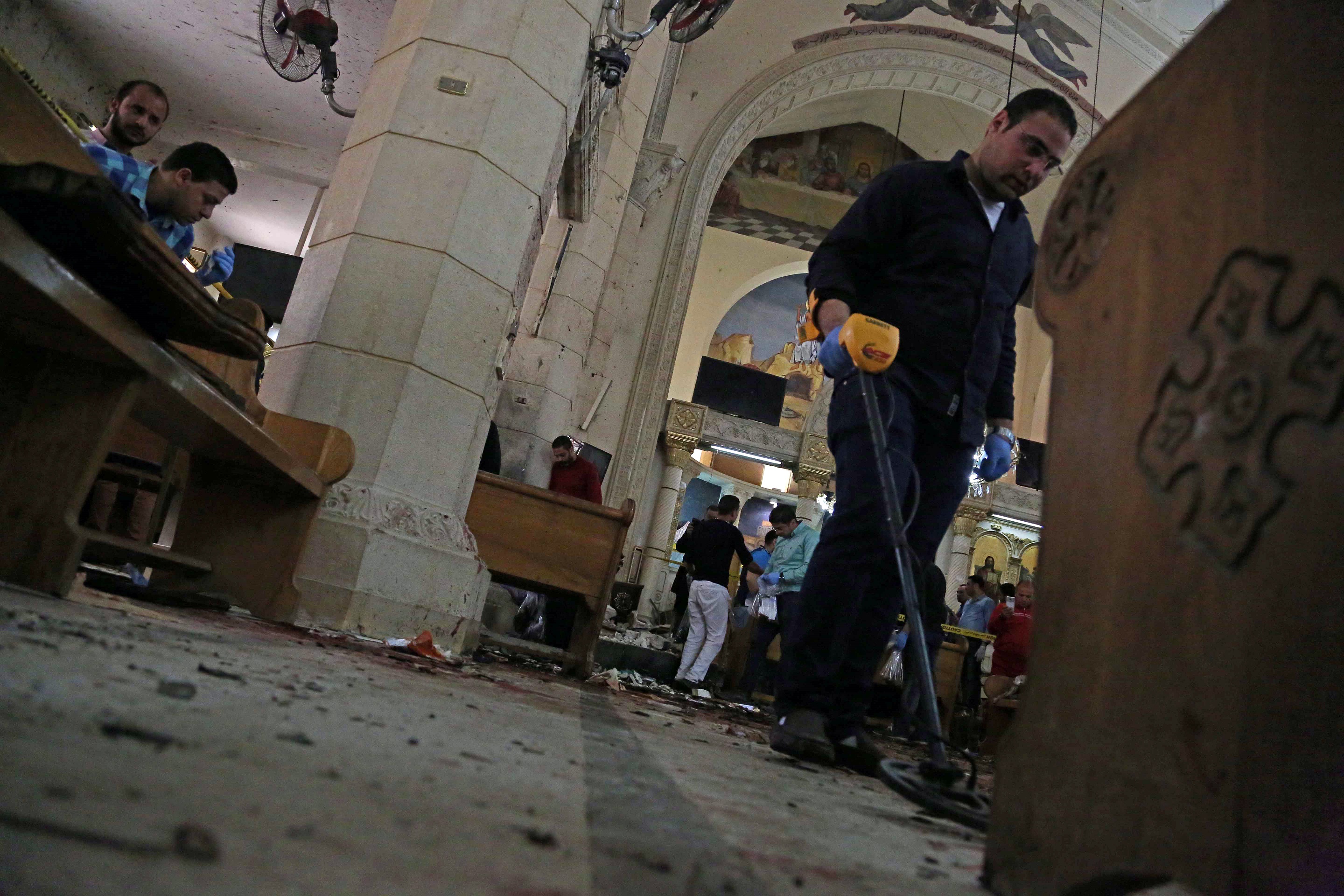 A general view shows forensics collecting evidence at the site of a bomb blast which struck worshippers gathering to celebrate Palm Sunday at the Mar Girgis Coptic Church in the Nile Delta City of Tanta on April 9, 2017.

EGYPT – Coptic Christian worshippers in Egypt spoke of horrific scenes on Sunday after a bomb ripped through their church during a service, mangling bodies and destroying pews.

"There was a violent explosion near the altar," Edmon Edward told AFP.

"Suddenly everything became black, people flew over each other," he said.

He had been attending Palm Sunday mass at the Mar Girgis church in Tanta with his brother Emil, who stood with a white bandage wrapped around his head, when the attack claimed by the Islamic State group happened.

The explosion killed at least 27 people, and was followed hours later by a second bombing at a church in Alexandria, which killed 17.

At the church in Tanta, icons of Christ and St George looked down on a tangle of destroyed pews and congealing blood on the floor tiles.

"I head the blast, and then I saw a woman run barefoot with her face oozing blood," said a taxi driver who asked not to be identified.

In hospital, a wounded witness told state television: "I just felt fire grabbing my face. I pushed my brother who was sitting next to me and then I heard people saying: 'explosion'."

Nabil Nader, who lives opposite the church, spoke of the attack's aftermath and said the first three rows of pews in the church were destroyed.

"I heard the blast and came running. I found people torn up... some people, only half of their bodies remained," he said.

"The father of a friend of my son was in the front row," he said, his voice breaking with anguish. "We found only his shoe."

Nearby, a man held up a burned prayer book and a traditional braided palm-leaf crucifix, stained with blood.

"They came to pray and they died," he said.

"The victims were destroyed," said Mohammed, a nursing student helping at the hospital were the victims of the attack were taken.

"Some are broken up inside. Some are completely burned," he said.

Police sirens wailed incessantly around the city as ambulances ferried victims to hospital.

Police cordoned off the church, but residents who gathered nearby weer unable to hide their anger.

Despite the presence of metal detectors, the bomber was apparently able to enter the building without any hindrance.

"How was the bomb able to enter, while police" were outside the church, asked Nagat Assaad, holding back tears.

"What are the detectors for? We don't want their protection."

Egypt's Copts, who have suffered repeated deadly jihadist attacks, say they feel abandoned and discriminated against by the authorities in the predominantly Muslim country.

But despite their fears, the Christians of Tanta said they are determined to defend their faith.

"We're Christian and we will stay Christian," one woman said in a defiant tone.