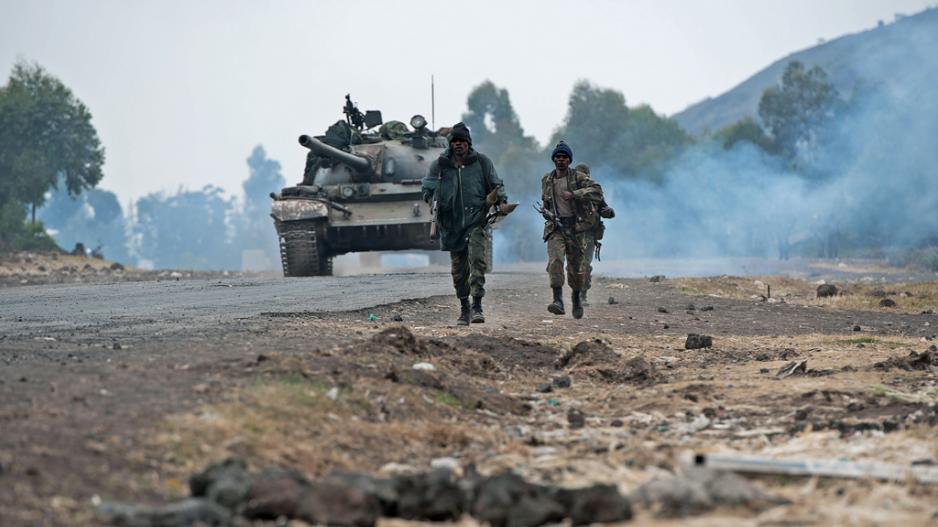 Congolese army soldiers walk ahead of a tank through Kanyarucinya, around 10km from Goma, in the east of the Democratic Republic of the Congo on July 17, 2013.

BRAZZAVILLE, Congo - A key Congolese rebel group signed a ceasefire deal with the central government in Brazzaville on Saturday, after months of renewed armed conflict in the oil-rich nation.

Fighters loyal to ex-rebel chief Frederic Bintsamou -- seen as having disbanded after a 2003 peace deal -- rose up again April last year in protest at the re-election of President Denis Sassou Nguesso.

The fighting in the southern Pool region affected at least 138,000 people and halted district elections in July.

It also cut off crucial transport routes between the capital Brazzaville and the main oil port -- worsening an already dire economic situation for the country affected by plunging crude prices.

"The accord is good news at a time when the economic situation is not very good," government spokesman Thierry Moungalla told AFP.

"The ceasefire begins today," said Ntondo who was only recently released from jail along with another Bintsamou ally.

According to the short agreement, Bintsamou, also known as Pastor Ntumi, committed to "facilitating the collection of weapons held by the ex-combattants" and to not "hinder" the restoration of state authority in the Pool region.

The government said it would support the "professional, social and economic reintegration" of the rebels once they handed over their arms.

Brazzaville also said it would guarantee the return of displaced people.

A commission with representatives from both sides is to oversee the implementation of the ceasefire.

The Paris-based opposition group Sassoufit said the "accord&39;s spirit is positive", but queried whether Ntondo may have been forced to sign the deal under duress.

President Sassou Nguesso, 73, has led Congo for over 30 years.

The former paratrooper served as president from 1979 to 1992, and then returned to power in 1997 following a civil war with Pastor Ntumi&39;s so-called ninja rebels.

Sassou Nguesso won two successive terms in elections in 2002 and 2009, both of which were disputed by opposition parties.