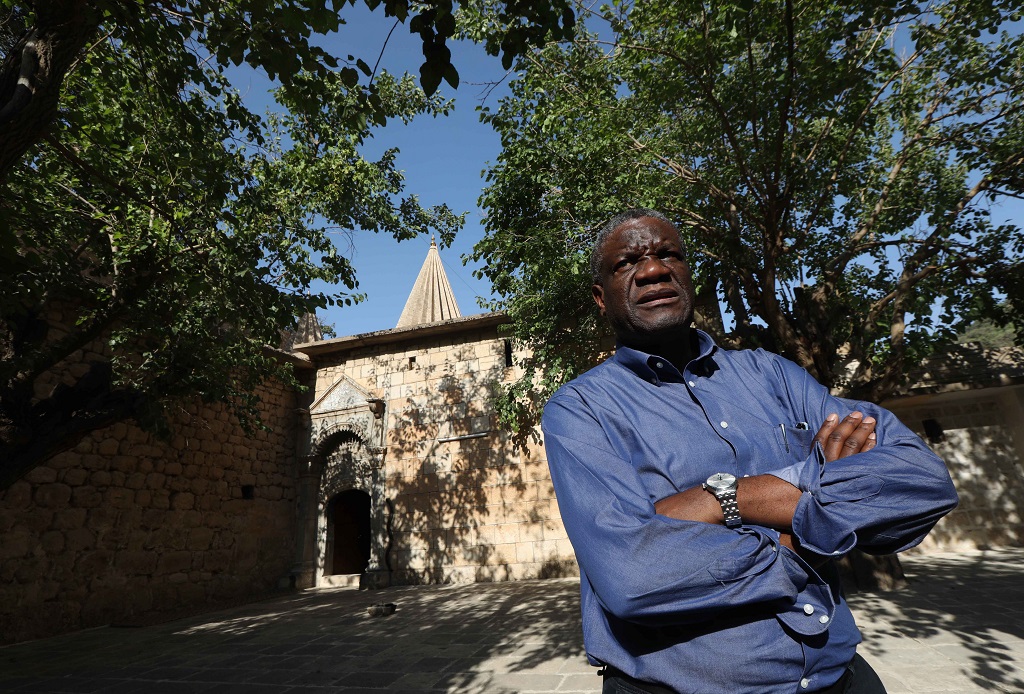 Congolese gynaecologist Denis Mukwege is photographed at Lalish temple in a valley near Dohuk, 430 km northwest of the Iraqi capital Baghdad, on June 24, 2018.

DOHUK, Iraq - At the Yazidi minority&39;s holiest site in Iraq, Congolese gynaecologist Denis Mukwege pays homage to a spiritual leader who has decreed women raped by the Islamic State group should not be stigmatised.

The renowned doctor shakes hands with white-bearded Khurto Hajji Ismail, the Yazidis&39; Baba Sheikh or spiritual leader, in the Lalish temple where two conical roofs symbolise the journey from earth to heaven.

Yazidis are followers of an ancient religion with more than half a million believers in northern Iraq, but in 2014, IS kidnapped thousands of the sect&39;s women and girls as sex slaves.

"In many communities, women are excluded -- stigmatised just after being raped", the 63-year-old gynaecologist told AFP, just ahead of his visit to the temple in Nineveh province.

"But Baba Sheikh has said we are human... and women should not be stigmatised" after what they have suffered, he added.

READ: DRC lawmaker, 18 others on trial for raping children

The sexual enslavement of Yazidis is a tragedy Mukwege is especially qualified to talk about.

Back home in the Democratic Republic of Congo (DRC) he runs a hospital that has treated tens of thousands of women in South Kivu province.

The patients are victims of a brutal 1998-2003 war and subsequent conflicts, where mass rape has been used as a weapon of war.

Thanks to Baba Sheikh&39;s stance, Yazidi women can break "the silence" and give their testimony, Mukwege said.

"I think there is a way to share this experience... to join our forces to fight against rape as a weapon of war", Mukwege said.

He also called on the international community "to take responsibility" for the Yazidis&39; treatment by IS, which the United Nations has branded a genocide.

"If there is no justice, if you let this happen without punishment", it can be repeated, he told AFP.

A UN report published in August said Iraq was responsible for prosecuting perpetrators and helping victims, while warning that women who were married off to IS fighters risked discrimination.

Mukwege was invited to Iraq by Yazda, an NGO created in 2014 to help Yazidi women recover from the trauma of rape.

He took part in a workshop on Monday in Dohuk, in northern Iraq&39;s autonomous Kurdistan region, to pass on expertise to those working to rehabilitate Yazidi survivors.

The doctor listened and gave advice to participants.

"I wanted to see how they experience it, how they get over it... so I can help the women in my community who have been under IS, who have been survivors to really rebuild and change this pain into power," Alawka said.

More than 6,400 Yazidis were enslaved by IS in 2014, according to Kurdistan&39;s Ministry of Religious Affairs.

Of this total, some 3,200 were rescued or successfully escaped.

The fate of the others is unknown -- and in some cases might never be confirmed.

Military offensives by Iraqi security forces against IS saw its self-proclaimed caliphate crumble, with some surviving jihadists fleeing to neighbouring Syria.

Alongside the kidnappings, IS killed thousands of Yazidis.