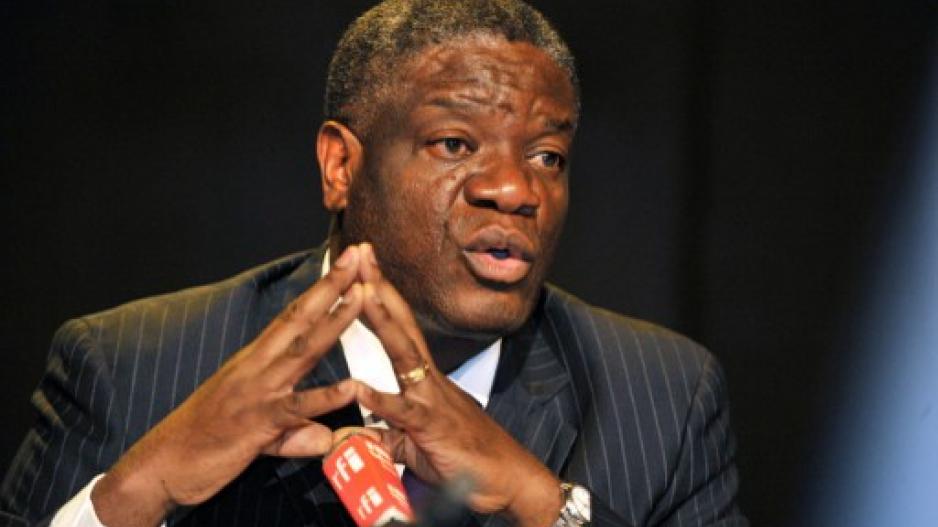 Pioneering Democratic Republic of Congo doctor Denis Mukwege, who founded a clinic for rape victims in the DRC. He received the 2013 Civil Courage Prize on Tuesday night for his work at the Panzi Hospital.

The Sakharov Prize is intended to honour exceptional individuals who combat intolerance, fanaticism and oppression.

Denis Mukwege is a tireless advocate for the rights of women in DRC.

In September 2012, Mukwege made a strong speech condemning impunity for mass rape in the DRC, openly criticizing the shameful 16 years of inaction by the International Community and the Congolese government about the massacres in the Kivu region of the D.R.C.

On October 25, 2012, four armed men attacked his residence while he was not home, held his daughters hostages, and waited for his return to assassinate him.

Upon his return, his guard intervened and was shot dead by the assassins.

They missed Mukwege as he dropped to the ground during the shooting.

After the assassination attempt, Mukwege went into exile in Europe and the Panzi Hospital reported that his absence has had a “devastating effect” on its daily operations.

He returned to Bukavu on January 14, 2013 where the population reserved him a warm welcome over the 20 miles from the Kavumu airport to the city of Bukavu, especially from his patients, who had raised funds to pay for his return ticket by selling pineapples and onions.

Denis Mukwege Mukengere founded the Panzi Hospital in Bukava  in the eastern DRC.

As a young child he accompanied his father, a Pentecostal pastor, while visiting sick members of the community.

This later inspired him to become a doctor.

The Swedish Pentecostal mission helped support him in his medical studies.

He decided to specialize in gynecology and obstetrics after observing that female patients at Lemera Hospital suffered from insufficient medical care, which caused complications during their deliveries.

Amid the war in eastern DRC, in 1998, he initiated the construction of Panzi Hospital in Bukavu.

The hospital has become known worldwide for the treatment of survivors of sexual violence and women with severe gynecological problems.

Mukwege has been the recipient of numerous other awards and accolades and in 2009 was named African of the Year.

2010 – Honorary doctorate in medicine at Umea University in Sweden