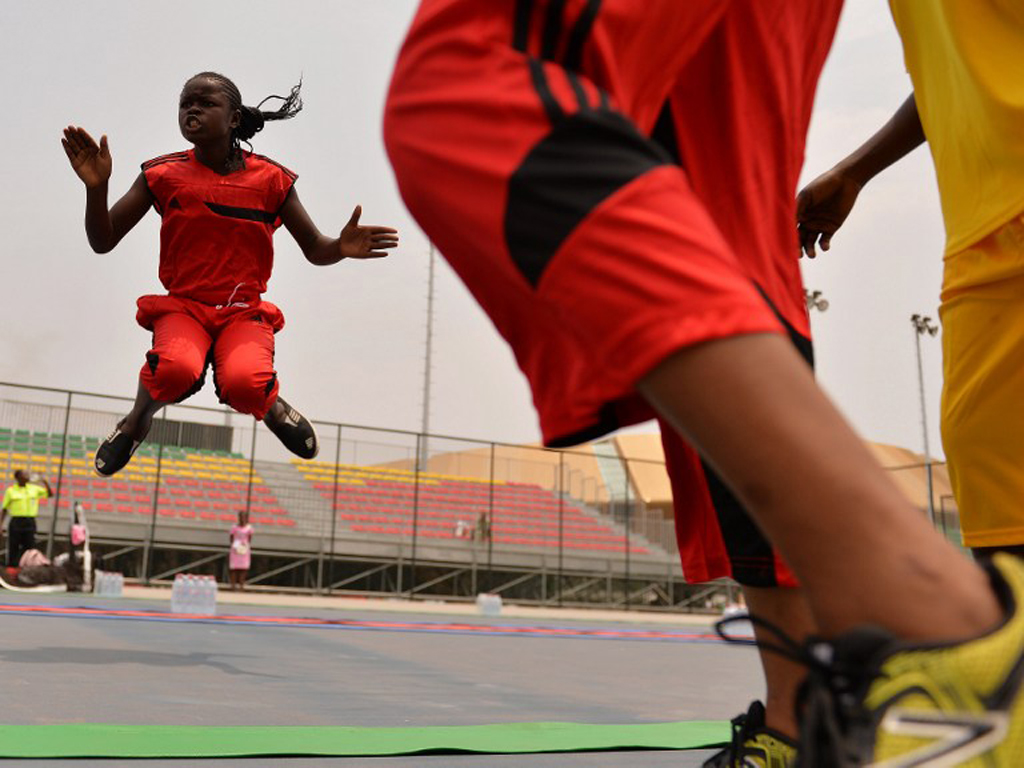 Congolese athletes compete in a demonstration of Nzango for the 11th African Games in Brazzaville on September 7, 2015. Nzango is a traditional Congolese sport with two teams challenging each other to keep the rhythm with jumps, kicks and snaps.

KINTL – &39;Nzango&39;, a fun dancing game which Congolese children love to play in the street or during school breaks, has just hit the sporting big-time with a demonstration at the  African games.

An energetic mixture of gymnastics, dance, singing, jumps and choreography, Nzango is a popular pastime on both sides of the Congo river -- in Congo-Brazzaville and the Democratic Republic of Congo.

According to Feconza, the Congolese Nzango Federation, the game originated from northern DR Congo, well before the country gained independence from Belgium in 1960.

A kind of spring-loaded variant of the rock-paper-scissors game well-known to many Western children, and former children, it was invented by girls fed up with seeing the boys have all the sporting fun.

Today it is a codified sport "like all the others" but at the start, Nzango was practised mainly at school or among neighbourhood children, explained Blanche Akouala, president of Feconza, which was created last year.

Now grown women are keeping their love of the game alive into adulthood, many as a keep-fit activity, others just as a fun escape from the household chores.

"I play Nzango to keep balanced. I also practise to keep rheumatism at bay. I feel I keep myself in shape," explained Doris Mantsanga, who coaches a Nzango team in Brazzaville.

"If you have the technique, you can always get out and play," she added, speaking on one of the sports grounds at Kintele, the epicentre of this year&39;s African Games held earlier this month, some 15 kilometres north of Brazzaville.

The game of Nzango involves two teams of players, lined up and facing each other on a pitch measuring eight metres by 16 metres.

The individual team members take it in turns to do battle with their opposite number, under the watchful eyes of a referee.

The players win points, also known as "feet", by dint of the position of their feet in relation to their opponents&39;.

The winning team is the one that wins the most "feet" over two halves of 25 minutes each.

The teams, made up of 11 players and six reserves, attack or defend alternately to the rhythm of songs chanted by all participants with accompanied hand clapping.

At the beginning of the match, the teams choose an attack foot, with one side taking the right foot and the other left.

Then the first two players step forward. The goal of the player from the attack team is to move forward on their designated attack foot at the same time as their opponent does.

Such movements are invariably preceded by ever more elaborate jumps --as you can&39;t lose a point while both feet are in the air.

On both sides of the Congo river, Nzango lovers have formed hundreds of teams who play in friendly tournaments. Occasionally teams from the two Congos take each other on.

In the Democratic Republic of Congo, the game is also used to settle intercommunal conflicts, bringing divided communities together in a joyous party atmosphere.

According to Feconza officials, Nzango has also been "exported" to Gabon and Cameroon.

But at the African Games exhibition there were five teams from DR Congo taking part in the open-air event.

The other demonstration sport at the African Games was Pharaoh Boxing, a type of martial art inspired by an ancient Egyptian martial art.

"These were just demonstrations, there were no medals to hand out," said Bienvenu Emile Bakale, deputy director general of the African Games organising committee.

"We have brought in Nzango to popularise it and encourage those who practise it," he added.

Nazaire Issie, of the Feconza federation, has greater ambitions for Nzango in the future.

"Our aim is to become an Olympic sport."