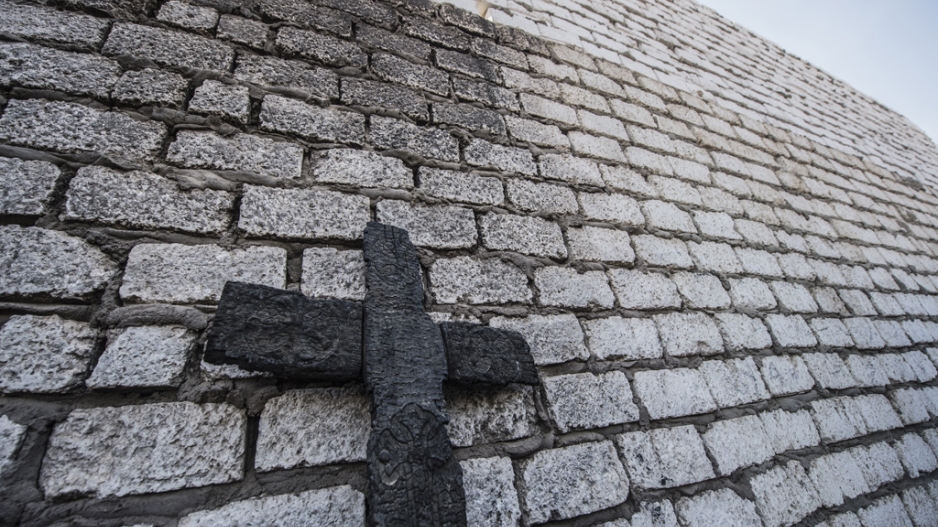 A picture taken on 24 July, 2016, shows a burnt cross in the rubble of a makeshift chapel that was torched a few months ago during clashes in the Egyptian village of Ismailia, in the Minya governorate.

JOHANNESBURG – Two Coptic Christians have been killed in the Northern Sinai city of Al Arish by suspected members of “Sinai Province”, a group affiliated to Islamic State (IS) that has been fighting an insurgency against Egyptian security forces over the last few years.

The Egyptian daily Al Ahram reported that the bodies of Saied Hakim, 65, and his son Medhat, 45, were found on Wednesday after they had been thrown behind a state-run language school in Al Arish.

The father had been shot dead and the son burnt alive after they had been kidnapped.

Their murders come just days after IS released a video threatening Egypt’s nine million Christians, who comprise 10 percent of the country’s total population of 90 million.

In the video, a masked man in battle dress (believed to be responsible for the deadly bombing of St Mark’s Coptic cathedral in Cairo in December, which killed 28 people, mostly women, and children) warns of further attacks.

An Egyptian member of parliament, Hossam El Refai, reported that both Copts and Muslims on the peninsula were being subjected to daily kidnappings and brutal killings by the militants with the goal of encouraging sectarian strife and forcing them to leave Al Arish.

“The investigations regarding the burnt Coptic citizen and his murdered father are continuing. There is no information regarding the identity of the perpetrators of the incident until now. We, as parliament members representing North Sinai, ask on a regular basis for rapid revision of the security strategy in the governorate,” said El Refai.

Only last week a Copt veterinary doctor was killed by anonymous militants, who shot him as he left his private clinic in Al Obour suburb in Al Arish.

The Sinai Province, previously known as Ansar Beit Al Maqdis, has been fighting Egyptian security forces since Egypt’s first democratically elected President Mohamed Morsi was overthrown in a military coup in 2012. In 2014 the organisation declared its affiliation to IS.

Over the course of the last two years the armed forces have launched counter-attacks against militant stationing points across the Sinai Peninsula where the group is based, particularly in the cities of Sheikh Zuweid, Rafah, and Al Arish.