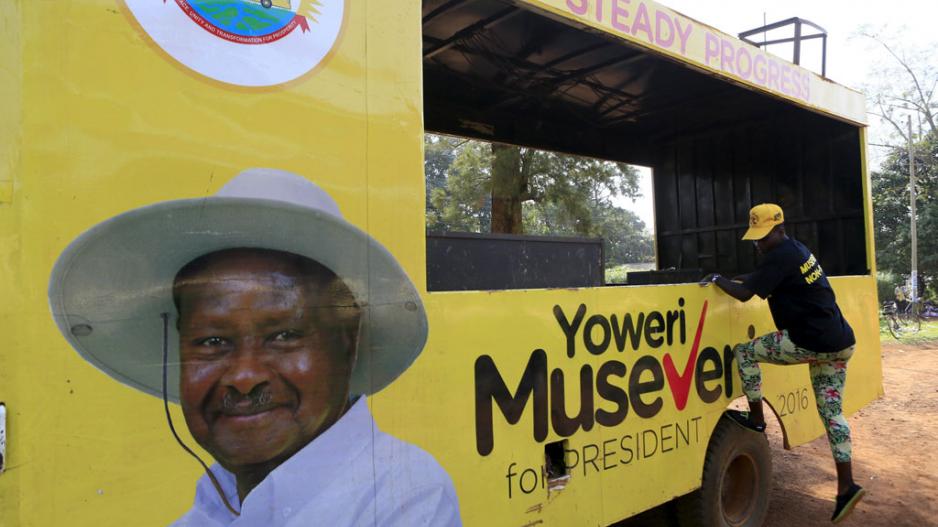 A woman gets off a truck with pictures of National Resistance Movement (NRM) party candidate Yoweri Museveni in Masindi town January 23, 2016 ahead of the February 18 presidential election.

"The Election Commission nominated Museveni lawfully in accordance with the Presidential Elections Act," Chief Justice Bart Katureebe said as he read the ruling to a packed court in the capital Kampala.

"We find no satisfactory evidence of the allegations of multiple voting," he added, dismissing opposition claims of separate tally centres falsifying votes.

"There (were) no illegal tally centres from which the Electoral Commission received results," the ruling said.

Museveni, in power since 1986, was last month declared winner with 61 percent of the vote and has rejected claims that his victory was won through cheating and fraud.

Third-placed Amama Mbabazi, a former prime minister who won just over one percent of the vote, submitted a legal petition challenging the February 18 result, but the nine-member Supreme Court rejected the bid.

"We find it difficult to believe that the petitioner&39;s performance at polling stations was due to unavailability of his agents," the ruling said.

Museveni&39;s closest rival, Kizza Besigye, was arrested several times during the campaign and on election day itself, which he said prevented him from lodging a similar legal challenge. He remains under house arrest.

Election Commission chief Badru Kiggundu, who also presided over the previous two presidential polls, both won by Museveni, gave evidence during the hearing.

Kiggundu apologised in court for "significant problems" faced by voters in the capital and the surrounding Wakiso district, both opposition strongholds, where polling materials arrived late or not at all.