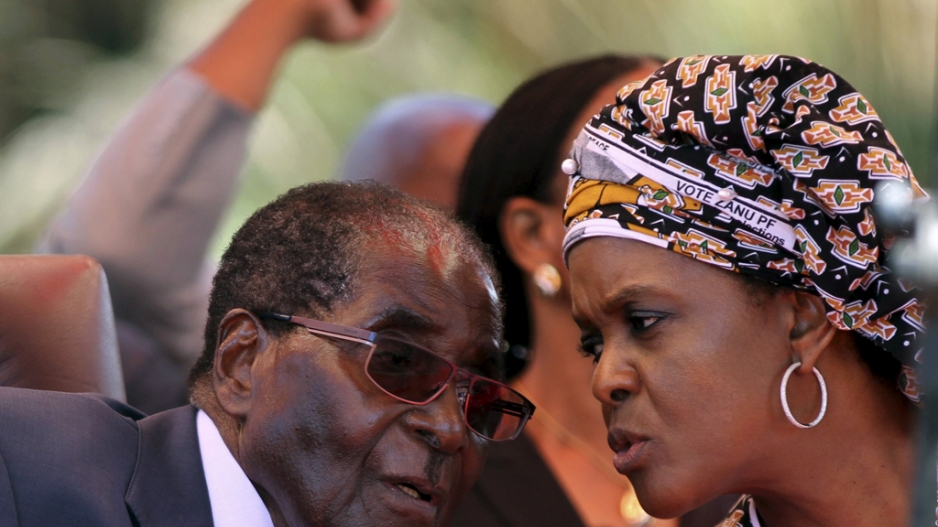 Zimbabwe's President Robert Mugabe talks to his wife Grace before addressing the ZANU-PF party's top decision making body, the Politburo, in the capital Harare, in this February 10, 2016 file photo. Mugabe turns 92 on Sunday.

HARARE – A high court judge has interdicted Zimbabwe government authorities from harassing villagers at a farm that powerful first lady Grace Mugabe wants to turn into a wildlife park.

Residents enlisted the Zimbabwe Lawyers for Human Rights (ZLHR) to file a court application to stop police brutality at Arnold Farm in Mazowe, Mashonaland Central Province. They have lived there for 17 years.

In the urgent chamber application, they bemoaned police actions that had rendered them homeless and their children’s education jeopardised.

The court ruled that police officers and officials from the ministry of lands and rural resettlement contravened villagers’ rights from arbitrary eviction and rights to privacy, property and administrative justice.

Government authorised them to settle at the farm in the year 2000, at the height of the violent government-backed fast-track land reform programme.

This is the second time Zimbabwean authorities have been ordered by the high court to stop harassing Mazowe villagers, demolishing homesteads and evicting them.

Their woes started in 2015 when President Robert Mugabe’s discordant wife, who owns vast tracts of land, eyed the property to set up a game park.

Police have been forcing the villagers out in defiance of the court order granted that same year.

Another plan to evict the villagers to pave way for the first lady’s game park project was ruled illegal in 2015.

Mrs Mugabe, who is believed to have presidential ambitions, has also defied court orders to return properties she has forcibly taken over from a Lebanese businessman after a diamond ring deal went sour.