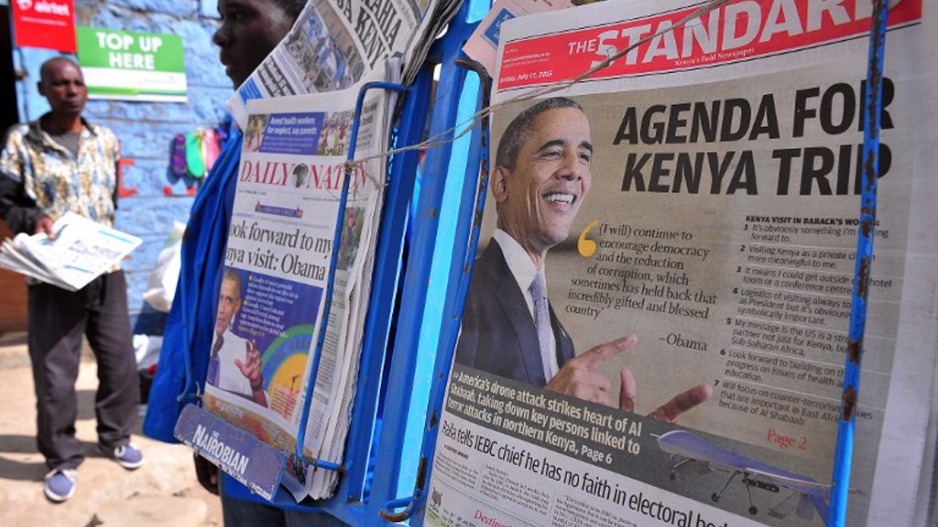 Headlines on US President Barack Obama's upcoming visit to Kenya are dominating newspapers in Kenya.

NAIROBI - Kenyan media reacted with dismay on Thursday after lawmakers approved a bill that could see journalists slapped with huge fines or jailed if found guilty of "defaming" parliament.

The clause, which outlaws any publication of words deemed "defamatory to parliament", provides for fines of up to 500,000 shillings (4,850 dollars, 4,245 euros) or a two-year jail term.

"It&39;s a crime to say anything MPs don&39;t like," the Daily Nation newspaper front page read.

The Standard described it as a "dark day in (the) graft war" and said MPs had "openly declared their hatred for freedom of the press."

The media restrictions are part of the Parliamentary Powers and Privileges bill, which requires approval by senators and President Uhuru Kenyatta before becoming law.

Similar media restrictions were passed in 2013, but were later sent back to parliament for review.

Lawmakers defended the bill, saying it would stop parliament being subject to "mob justice," according to MP Nicholas Gumbo, quoted in The Standard.

"Are we just going to allow false and scandalous information to be written about us just because we are MPs?" he asked.

Kenya, which is ranked 145 out of 174 on Transparency International&39;s annual corruption index, has long been blighted by graft.

In Kenya, public office is viewed skeptically by many citizens as a route to personal enrichment, and a report in July by the country&39;s auditor-general found that only one percent of government spending was properly accounted for.

"The MPs want to cover up their greed for public money and misbehaviour like fighting, keeping countless mistresses and engaging in all sorts of vices," The Standard&39;s editorial read.

"Media freedom is not a privilege: it is a right that must not be trampled on."

The Star newspaper called the law "draconian" and warned that "parliament is increasingly removing itself from any oversight or restraint."

US President Barack Obama noted in July while visiting Kenya the problem of corruption among elected officials.

"If they see an elected official and they know that their salary is there, and suddenly they&39;re driving through town in a very big car, and they see their cousin driving through town with a very big car, and they&39;re suddenly building a new house, and all that doesn’t seem to match up with their salary, they don&39;t have to be a forensic accountant to know what&39;s going on," he said.