Displaced from Libya, 'ghost town' stranded on a desert plain 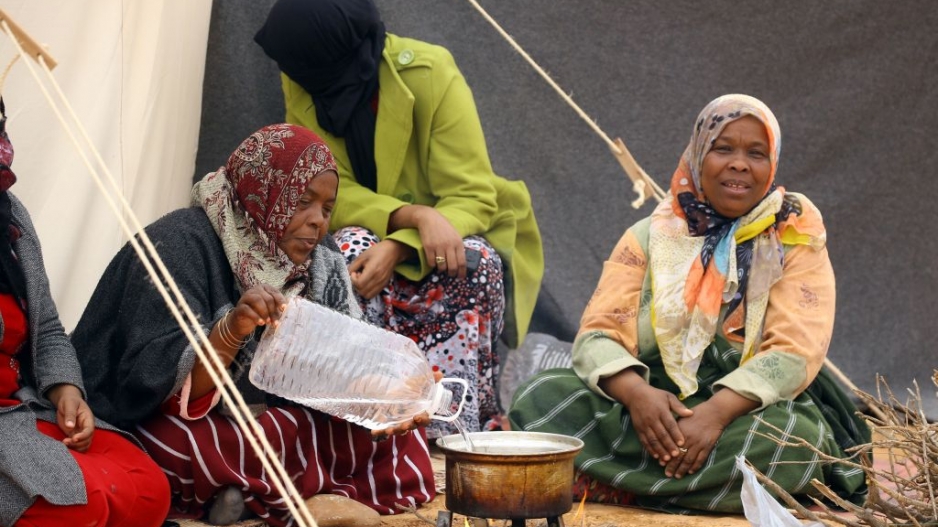 Displaced women from the Libyan town of Tawergha, 260 km east of the Libyan capital Tripoli, prepare food on February 8, 2018 at a temporary camp, 20 kms from Tawergha, after they were denied entry to their hometown.

QARARAE AL-QATF, Libya – On a windswept desert plain, displaced families from a town which sided with Libya&39;s leader Muammar Gaddafi before his ouster in a 2011 revolt have been left in a makeshift camp to rue their bad fortune.

A last-minute breakdown in a deal to allow their return has left them stranded, within sight of the palm trees of their home town of Tawergha east of the Libyan capital Tripoli and 40 kilometres from the rival town of Misrata.

Armed groups from Misrata expelled Tawergha&39;s residents after accusing them of fighting alongside Gaddafi&39;s forces when their town came under a relentless siege during the uprising, as well as accusing them of taking part in torture, rapes and murders.

Gunmen from Misrata have been blocking the roads into Tawergha since February 1 when hundreds of Tawergha families rolled up in cars to return home under a deal struck by Libya&39;s unity government and Misrata.

They have also fired warning shots, without causing casualties.

"I can&39;t tell you how overjoyed I was when I heard we were going home. We were just at the entrance to town when they blocked the road," Najat al-Fitouri said, standing outside her tent.

She had come back from Tobruk, more than 1,000 kilometres (600 miles) to the east, where she had taken refuge with her seven children in 2011.

Like dozens of other families, she has been camped in Qararat al-Qatf, just 20 kilometres from Tawergha, waiting for results from talks between their mayor and the unity government which has been acting as mediator.

With its 40,000 residents driven out, Tawergha has been reduced to a ghost town in ruins.

Its would-be returnees in Qararat al-Qatf are using their cars as shelter or the hundreds of tents distributed by UN aid agencies. Two blue tents serve as dispensaries and four portable bathroom units have been set up.

"We move around with our gas cylinders and even use woods to keep warm and for cooking in the absence of electricity and running water. Sometimes we climb up a dune to catch a glimpse of our palm trees," he added.

A neighbour in the camp, Mabruk al-Suwissi, aimed his anger at the government.

"They&39;ve left us here without shelter or food for the past week. We need medicine... This desert is crawling with grass snakes and scorpions!"

Tawergha&39;s mayor, Abdelrahman Chakchak, said the return was being held up by elements in Misrata "who don&39;t understand that this is not a reconciliation... This is a return deal that could later lead to a reconciliation".

The mayor was giving a tour to the UN-backed unity administration&39;s local government minister, Badad Qansou, the first official to visit the camp.

"I thought the situation was better than this in the camp. We can clearly see families who&39;ve been left without shelter," he said, vowing to supply more aid.

"We&39;re determined to guarantee a return to Tawergha free of bloodshed. I see your suffering... A bit of patience and everything will be sorted out," the minister said.

"Haven&39;t we been patient long enough?" a frustrated onlooker shot back.