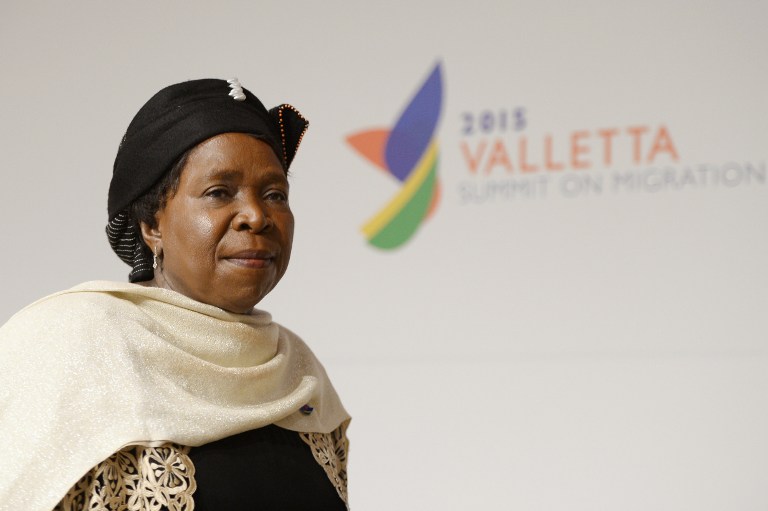 African Union Commission Chairperson Nkosazana Dlamini-Zuma arrives for the second working session of the European Union - Africa Summit on Migration at the Meditterranean Conference Center, on 12 November 2015 in La Valletta.

ADDIS ABABA – The chairperson  of the African Union (AU) Commission,Nkosazana Dlamini-Zuma, pointed to the containment of the Ebola epidemic in West Africa and a number of peaceful elections as some of the continent’s success stories in 2015.

In her New Year’s message, Dlamini-Zuma said: “We look back to the year 2015 with pride at the milestones we have achieved, prompted by the declaration of the ‘Year of Women’s Empowerment for the Realisation of African Agenda 2063. ‘

“We undertook several interventions towards the empowerment of women and girls, with the AU, the Regional Economic Communities (RECs) member states and all other sectors working together to deliver on this noble goal.”

She said several successful elections were held in member states, and “we congratulate the peoples and governments for their commitment at each election, to move a step further towards realising the spirit and letter of the African Charter on Elections, Governance and Democracy”.

Dlamini-Zuma added: “Our collective efforts of solidarity paid dividends when we finally defeated the Ebola epidemic in West Africa and made progress towards the operationalisation of the African Centre for Disease Control.”

She further pointed to the African Union Commission of Inquiry on South Sudan (AUCISS), the first of its kind on the continent, which finalised its assignment and came up with recommendations on peacemaking, transitional justice, and sustainable development for the Republic of South Sudan.

“We remain concerned about the ongoing challenges faced by the peoples of Burundi, Libya, Mali and South Sudan, and the African Union remains committed to work with our member states to ensure that lasting peace is restored.

“We pay tribute to the African peacekeepers who continue to serve the continent and help to move us closer to the goal of silencing the guns by 2020,” she said. “To those who during 2015 made the ultimate sacrifice, we shall remember their contributions.”

During the year, the AU Commission in conjunction with the UN Commissions for Africa  introduced the African Union Gender Scorecard to, among other things, take stock of the impact of gender interventions on women empowerment towards the accomplishment of the Africa Agenda 2063.

“The outcome of this effort reveals that significant achievements had been made, but much more needs to be done, and done faster.

“In order to sustain the momentum of gender equality and women’s empowerment in 2015, the African heads of states and government declared 2016 as the Year of Human Rights with special emphasis on women rights to, among other things, complement and build on the 2015 achievements.

“In view of the foregoing and considering the fact that the year 2016 marks a veritable watershed on the continental human rights trajectory, the African Union will focus on the following three thematic areas to promote human rights in general and women rights in particular this year.

Dlamini-Zuma said: “We look forward to partnering with you on these noble initiatives this year. Let me seize this opportunity to thank the RECs, the AU organs and institutions and AU member states, civil society organisations and the international community for their commitment to the aspirations of our Union and to wish everyone a very prosperous, peaceful and happy 2016.”