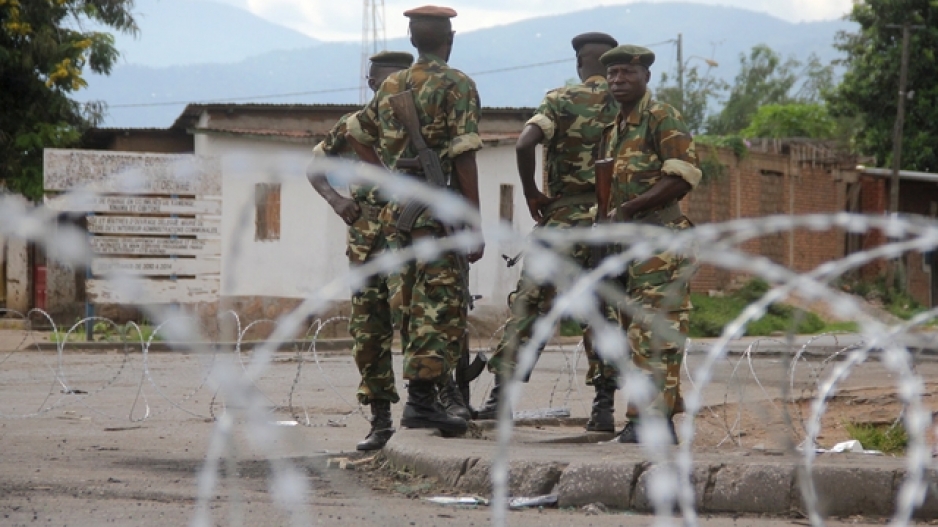 Soldiers stand behind a barricade during demonstrations by protesters against the ruling party's decision to allow Burundi President Pierre Nkurunziza to run for a third five-year term in office, in Bujumbura, May 7, 2015. REUTERS/Jean Pierre Aime Harerim

BUJUMBURA - Kenya Airways and RwandAir cancelled their flights to the Burundian capital on Friday, officials said, after gunmen launched attacks on military bases in Bujumbura in the early hours of the morning.

"The reason we could not land is that there is no personnel," said Kenya Airways Corporate Communications Manager Wanjiku Mugo, adding that all three of its daily flights were cancelled.

A RwandAir official said its flight to Bujumbura on Friday had also been cancelled. It was not immediately clear if the airport had officially been shut.

Dozens of people were killed in coordinated assaults on two army barracks in the Burundi capital Bujumbura early Friday, according to witnesses and a military source.

Fighting began at around 4:00 am (0600 GMT) when "heavily armed men" attacked a base at Ngagara in the north of the city and a military training college in the south, according to a senior military officer, who spoke to AFP on condition of anonymity.

Burundi This is how it feels like in Bujumbura this morning. Fighting.., pic.twitter.com/DovFNFEwdA

"After more than two hours of clashes, the army repulsed the southern attack, while virtually all the attackers were killed in Ngagara base," the officer said.

"There are dozens of deaths among the attackers, and we also have losses," he said, adding the situation would soon be brought "completely" under control.

The attacks on the army base in Ngagara and the  ISCAM Higher Institute of Military Training in Musaga were confirmed by 10 witnesses contacted by telephone. All spoke of heavy firing, including the sounds of artillery, lasting several hours.

The fighting is the heaviest since a failed coup in May, sparked by President Pierre Nkurunziza&39;s bid for a third term which he later won in disputed elections in July.

"I am holed up in the corridor of my house with my wife and children," said Eric, a resident of Musaga. "Pray for us because we will die!"

A government spokesman confirmed the attacks on Twitter, referring to the gunmen as "Sindumuja", meaning "I am not a slave", a name sometimes used for the insurgents.

"Tonight the Sindumuja tried to attack military camps but they failed," Willy Nyamitwe, media advisor to the president, wrote early on Friday.

Pacific Nininahazwe, an exiled civil society activist and anti-Nkurunziza protest leader said that, "at least two camps were attacked" and weapons looted and claimed that "soldiers have joined the rebels".

Exchanges of fire could still be heard in several neighbourhoods of Bujumbura by 8:30 early on Friday, when most people would be heading to work. Instead, the streets were empty as city residents stayed home.

"All bridges are under army control and no movement is being permitted from one area to another," the senior military officer told AFP.

The UN and several foreign embassies on Friday urged their employees to stay at home and lock their doors.

"This is a very worrying escalation because it is genuine military, or paramilitary, operations taking place in the capital," said one European diplomat.